Sons of Erin hold on in Holbrooks thriller

Sons of Erin held on in a tense finish at Holbrooks

HOLBROOKS was the venue for the opening game of the Intermediate Football League B and it was a humdinger between Sons of Erin and St Finbarrs that went right to the end, the visitors edging it by a single point.

Sons lead for the majority of the game and when Stephen Coen was dismissed in the second-half it looked as though they would ease to an opening day win in the Coventry sunshine.

Yet, to their credit, Finbarrs threw everything at them in a frenetic final ten minutes only to come up agonisingly short of forcing a draw. 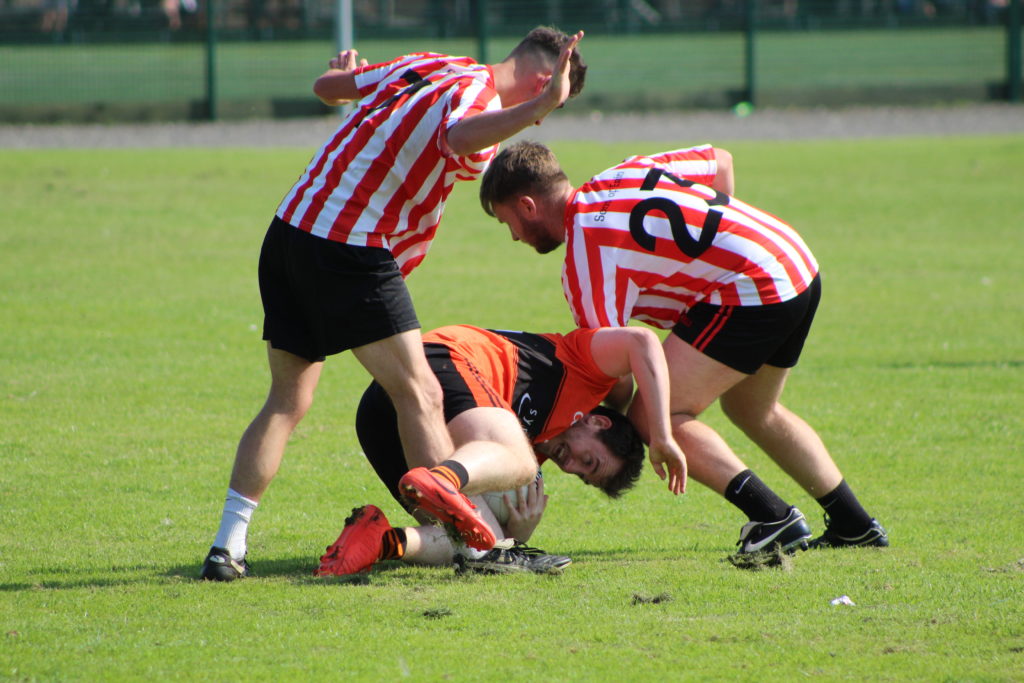 The game started well for Sons who bagged their first goal thanks a looping Ethan Bonner effort.

At the other end Rich Murray pulled a close-range effort wide of goal before Sons took control with the wind advantage.

A sweetly struck sideline score from Stephen Conneely started the ball rolling before Sons were denied not one but two guilt edge goal chances thanks to some excellent diving saves by Aidy Moore, his second from Jack McLoughlin particularly impressive.

However, scores from Gary Cassidy and Tom Conneely extended the visitors’ advantage before a second goal duly arrived for Sons after some fine work down the left ended with Cassidy slotting home past Moore from a tight angle.

Finbarrs rallied before the interval however to give themselves some momentum going into the second-half, Danny Harte looping a speculative effort into the far corner of the net before Rocco Carr slammed over a point from open play to reduce the gap back to seven, albeit with Tom and Stephen Conneely restoring Sons’ nine-point advantage come the interval. 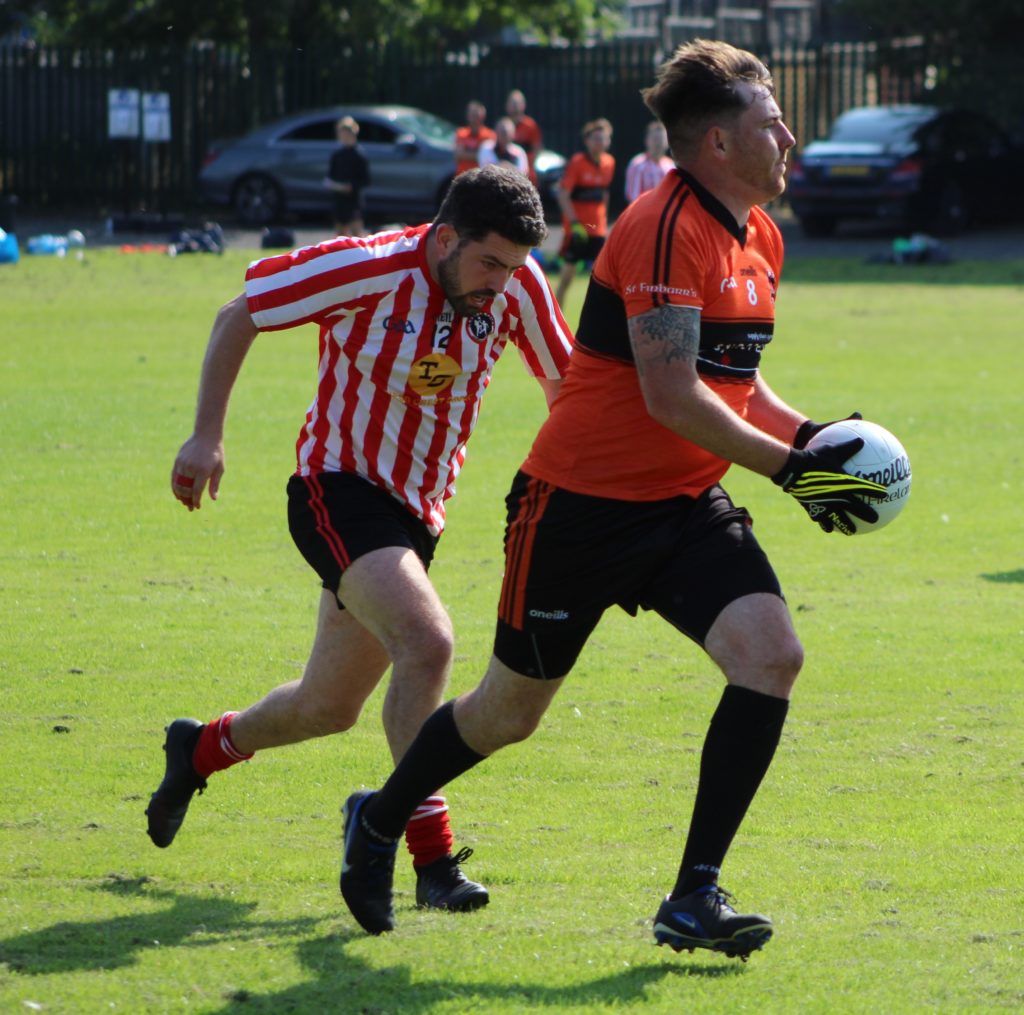 That became twelve at the start of the second half, when Stephen Conneely cut in from the right to slot home a third Sons goal in what looked to be the game clincher.

Cue a crazy closing twenty-five minutes that saw Finbarrs rally as the game wore on; they made a start with Carr hitting 1-1 (1 free) to bring some cheer to the home support before substitute Ephraim Opaku and Chris McShane added two more points from play.

Despite a Conneely free, Finbarrs kept on coming and a fine point from Carr preceded his second free conversion of the half. With the gap back down to four points in the closing stages McShane struck another effort over the Sons crossbar to leave just a goal between the sides, although Sons responded quickly down the other end to restore their buffer. 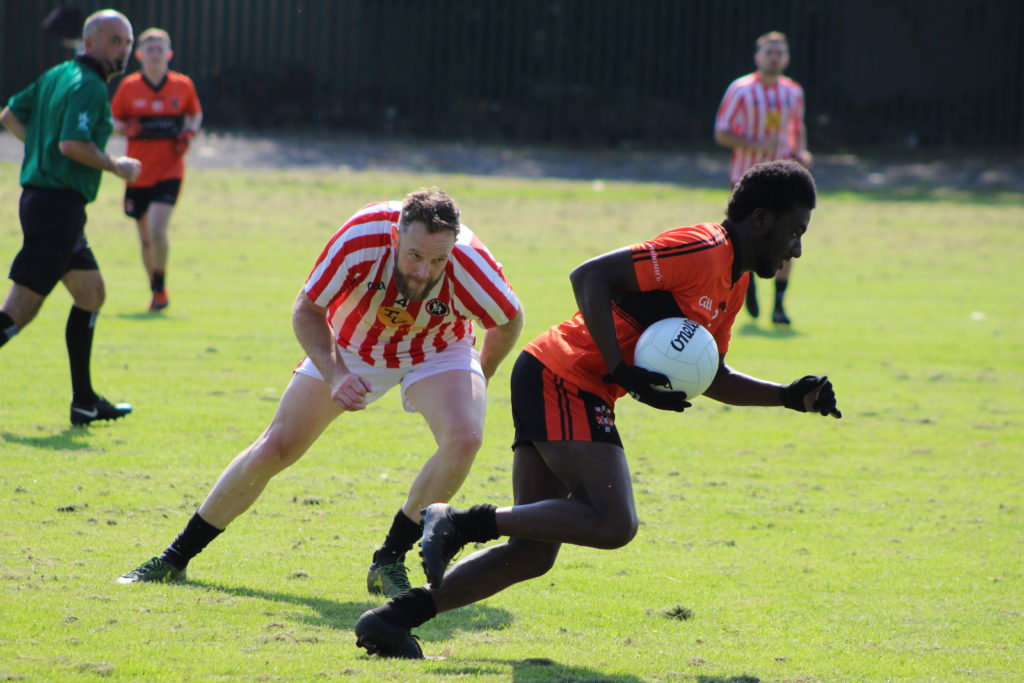 A grandstand final few moments were unleashed when Opaku lashed home a third Finbarrs goal to leave just a point between the teams but despite one final flourish they were unable to find that elusive equaliser.

In Sunday’s other game in the B league, Naomh Padraig took on Four Masters at Pairc na hÉireann where a seven-goal performance from Leicester saw them take the points on a score line of 7-15 to 0-7.

The three-team Intermediate League A began with St Josephs playing St Barnabas in Leicester in a game that went the way of Derby by two points, final score 2-16 to 3-11 in favour of St Josephs.

With the winners of the league taking the sixth and final spot in the Senior Football Championship there is no room for error for any of the three clubs participating - St Marys are the third club in the division and they open their campaign against Barnabas this Sunday (game currently set for a 2:30pm throw-in at Holbrooks).

Man of the match:

Stephen Conneely (Sons of Erin)
His goal at the start of the second-half proved vital for Sons as they hung on against the late onslaught.

Warwickshire GAA returns this weekend with a bumper programme

By: Anthony McLaughlin  -  1 week ago