Sport 2020 – a year of dulled sensations and frozen league tables

THE coldest winter Mark Twain ever spent was a summer in San Francisco - but the past few months might have given him a run for his money.

Sure, the sun has shone and the evenings have been pleasant but there's not much use in the famous grand auld stretch in a lockdown.

For the Irish sports fan it has been a year of dulled sensations and bleached colours, where the rhythms and traditions that tether us to the seasons have been worked away.

For the Irish emigrant, it cuts further still.

An empty diary severs ties not just with the world around us but also the one we left behind - and cancelled Ryanair flights are just the start of it.

We all know sport is trivial (even Bill Shankly didn't really believe his quote about football being more important than life and death) and as the world juddered to a halt this year there were very few people who felt it should be excepted.

But what cannot be denied, however meaningless in the grand scheme of things, is Irish sport's importance to those living abroad.

An awkward view of a boxy TV in the corner of the Ramble Inn will never really replace the real thing across the water.

But when a goal or point sets the room shaking, when conversations fall silent for Amhran Na Bhfiann, or when the crick in your neck is cancelled out by a properly poured pint, it does come close.

Never has that comfort been more needed. 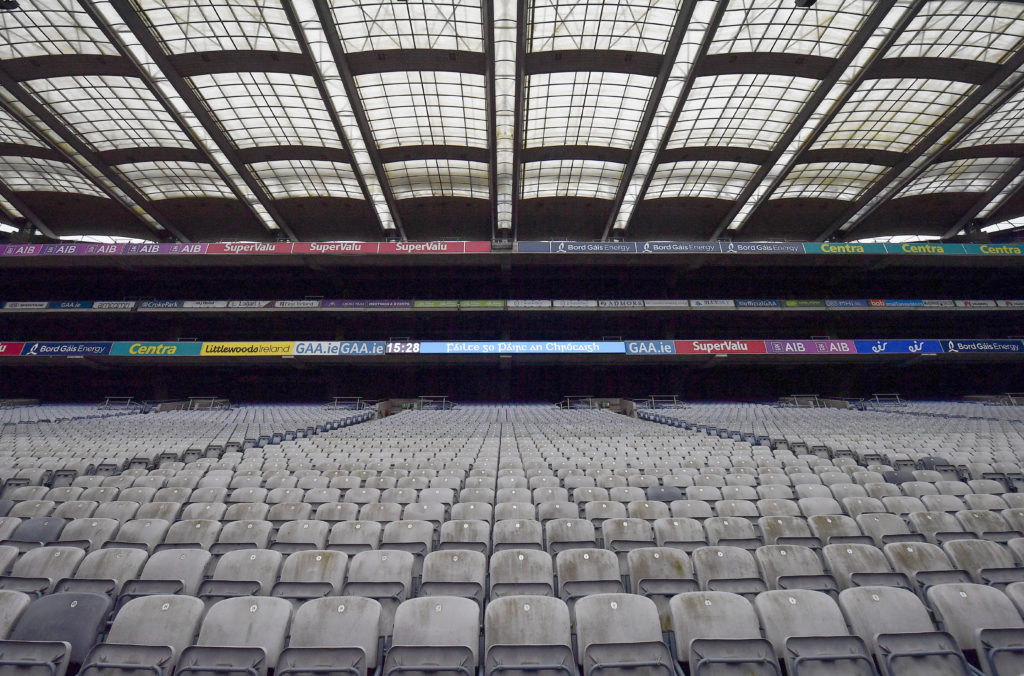 An empty Canal End in Croke Park Stadium at 3.28pm during what would be the playing of Amhrán na bhFiann on the original scheduled date of the 2020 GAA Hurling All-Ireland Senior Championship Final

Every month since lockdown has been marked by some passive landmark, a relentless march of should-haves and this-would-have-beens.

March and April slipped by without a Six Nations champion, the league table as frozen in time as those darkened pubs windows painted with flags and cartoon rugby balls.

May came and went without the Central Line pilgrimage to McGovern Park for the Connacht Football Championship opener (and the hangover that follows).

June and July have passed without the slow build-up of the GAA summer, a ratcheting of tension correlating perfectly with the increased sightings of sky blue and navy, green and yellow or green and red jerseys across the UK.

August and September will also slip away with a nagging sense of having forgotten something quite important.

Never mind a tree falling in an empty forest - if autumn rolls around without a Ruislip sunburn or a Ramble Inn neck-ache, did you really get a proper summer?

At least we don't need to feel sorry for Mayo fans - their annual tradition of not lifting a trophy in September will go ahead as usual.

Mark Twain's chilly summer on the West Coast doesn't sound all bad in comparison - although maybe we shouldn't be too dismissive.

After all, he didn't have the warming prospect of a Christmas All-Ireland final to look forward to.

Joey Millar is an Irish journalist living in London. He moved from Dublin to the UK in 2009.