Stephen Rochford: A win is a win but Mayo must improve on London performance

STEPHEN ROCHFORD was delighted to open up his Championship account as Mayo manager with a win over London, but admits the Westerners must up their game in the next round.

The visitors were fairly comfortable throughout the encounter but Rochford was left aggrieved at their tally of wides, though in general he was pleased with side’s effort.

Mayo had a mixture of youth and experience in their starting XV, with Championship debutants Evan Regan and Conor Loftus impressing in particular.

“I suppose in any Championship game that you come out of with a win, you can look at it as job done and move on but we took the game quite serious, although our execution was nowhere near what we’d expect it to be for further on in the Championship,” said Rochford.

“But, look, it’s only the first round and we’re building things here, and there’s always going to be things to work on.”

Mayo captain Cillian O’Connor received a black card in just the sixth minute, but Rochford had no complaints over the decision from referee Derek O’Mahony. 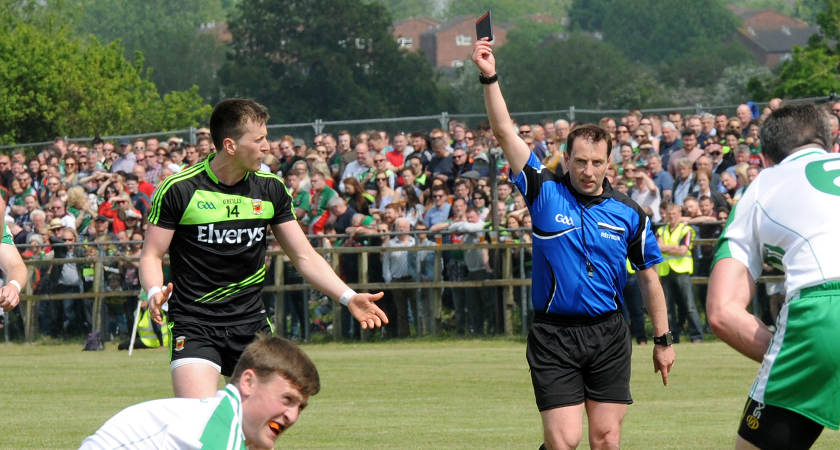 Cillian O'Connor receives his black card after tripping Philip Butler [Picture: Malcolm McNally]
“From what I saw, I think it was possibly a fair enough black," said Rochford. “There’ll be no one more disappointed with it than Cillian himself as captain of the team, but these things happen and I’ve no doubt he’ll be working very hard over the next few weeks to get himself back in the team.”

O’Connor’s replacement, Conor Loftus, came on and contributed a goal and two points from play in what was his Championship debut at senior level.

“Conor did very well,” beamed Rochford. “We saw him do well in the Under-21 Championship, especially in the All-Ireland final, he’s been struggling with injury over the last few years but it’s great to see him kicking on, making his Championship debut and scoring 1-2 to add a little bit more competition up front.”

When asked if he had a winning margin in mind before the game and whether they met their own expectations, Rochford insisted he would never be so presumptuous of a win.

He said: “What needs to be clear about this is that London deserve respect, so to be talking about maximums or minimums wouldn’t be giving any team respect and that’s not something that will ever be going on in this Mayo dressing room.”

Meanwhile, on the late decision to pull Parsons out of game, Rochford said risking a key player with a minor injury was not worth the gamble.

“Tom could have played but we just felt that another day or two would have just eased things for him.”

Mayo prove too tough for London in Connacht Championship quarter-final