WILLIE Groves was an essential member of Celtic’s first competitive side, scoring 16 times in 18 games during two spells at the club. He was undoubtedly the first Celtic hero.

Controversy never seemed to be far away from Groves. He was accused of taking bungs while at Hibs before the game turned professional.

In 1887 he won the Scottish Cup with the Leith club, one of only two in their history. Groves was the first player to be signed for £100 (from West Brom to Aston Villa) and was one of the most charismatic and versatile players of his day. He also played a major role in helping West Brom win the FA Cup in 1892 and helping Aston Villa securing the league in 1894.

Andy Groves, 42, explains what led him to solve the mystery of his final resting place. “He was an exceptional talent who was aware of his own worth but alas his life ended in poverty and illness. The graveyard where he is buried is in some disarray and the location of his burial has been something of an enigma.

I read on the Celtic Graves forum that he was buried in Newington Cemetery, Edinburgh. They had tried to find the grave but unfortunately didn’t locate it. With the help of a genealogist I was able to clear up some confusion over his date of birth.

“I also found his headstone but according to the forum he’s in an unmarked plot which I’ve also found. It’s a sad sight and in need of maintenance. This is a player who played such an important role in the history of Celtic, Hibs and also in English football.

"I know that Celtic Graves do a lot of good work in this area, perhaps with some support from Celtic and possibly Hibs it can be rectified.” 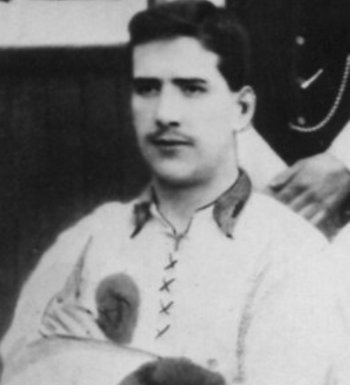 The son of Irish parents and christened Patrick William Groves, he was born in Hutchesontown, Glasgow on August 20, 1868. The centre-forward played in many Celtic firsts. There was an outstanding scoring consistency in the club’s inaugural Scottish Cup (1888-89) run which would allow the 20-year-old to find the net on no less than 10 occasions during that competition.

It was no embarrassment that the fledgling team were runners-up in the final to Third Lanark. In 1890 three days after his 22nd birthday the well-built player took the field for the ‘Bould Bhoys’ in their first Scottish league match against Hearts, confidently scoring twice in a 5-0 rout.

A fortnight later his status as a Celtic hero was sealed in a fresh Scottish Cup campaign. The opposition this time was Rangers, the first time the clubs would be competing against each other for meaningful honours and the birth of the famous Glasgow rivalry is evident from a Scottish Sport report in September 1890.

“When Groves scored the goal, T. Maley (brother of Willie), who was umpiring, waved his flag in jubilation. The Rangers players stared in blank amazement, the Celtic players shook hands effusively, the stands rose bareheaded to a man cheering vociferously, the crowds lining the railing did much the same thing, and the noise that little manoeuvre of Groves evoked could have been heard at Ibrox Park; it rose and swelled to one ground-note of triumph that bore in its tone the delighted response of 10,000 thankful hearts.”

The Scottish international’s signing from West Brom to Aston Villa continues to keep Groves in the headlines, the most recent example was when Gareth Bale singed for Real Madrid. Whenever a new record breaking transfer hits the media circuit you’ll find mention of Willie Groves because he was the game’s earliest entertainer with a jaw-dropping price on his head.

As the first £100 player part of the fee was a fine from the English FA after Villa, in modern parlance, tapped up the player, who had been a target for Everton twice. The subject even found its way onto University Challenge in 2010.

A vibrant character who was loved by the fans, in terms of Celtic he was perhaps the Frank McAvennie of his day. ‘Darlin’ Willie Groves’ was how Hibs fans referred to the player and it remains a point of aggravation that they lost their star to Celtic (twice).

He returned to Easter Road and played in the 1896 Scottish Cup final, losing out to Hearts. It remains the only final to be played outside of Glasgow.

Poignantly Groves would finish his days playing for Celtic in 1896. He retired from the game after developing Tuberculosis and died in Edinburgh on February 13, 1898 aged only 39.

I’ll leave the last words to an obituary published in the Glasgow Observer which described him as “tall, sinewy and graceful on the ball, his work was beautifully close, artful and deceptive. He was a picturesque figure, a sort of Romeo in the sport with his raven locks and classic-cut features. His career in all its varied spheres is one of the most romantic, and his personality will long remain as one of the most unique in British football.”