DUBLIN are gearing up for a three-in-a-row of All-Ireland Senior titles this Sunday, but Siobhan McGrath knows that Galway won't make it easy at Croke Park (4pm).

Four points separated the sides when they met in the group stages of the league back in March, with Dublin prevailing on a 2-8 to 1-7 score-line.

"It's always been 'tit-for-tat' with Galway, similar to the way it is with Cork," McGrath said.

"They are a very, very good side who have had massive underage success, so that's driving them on and they have confidence. 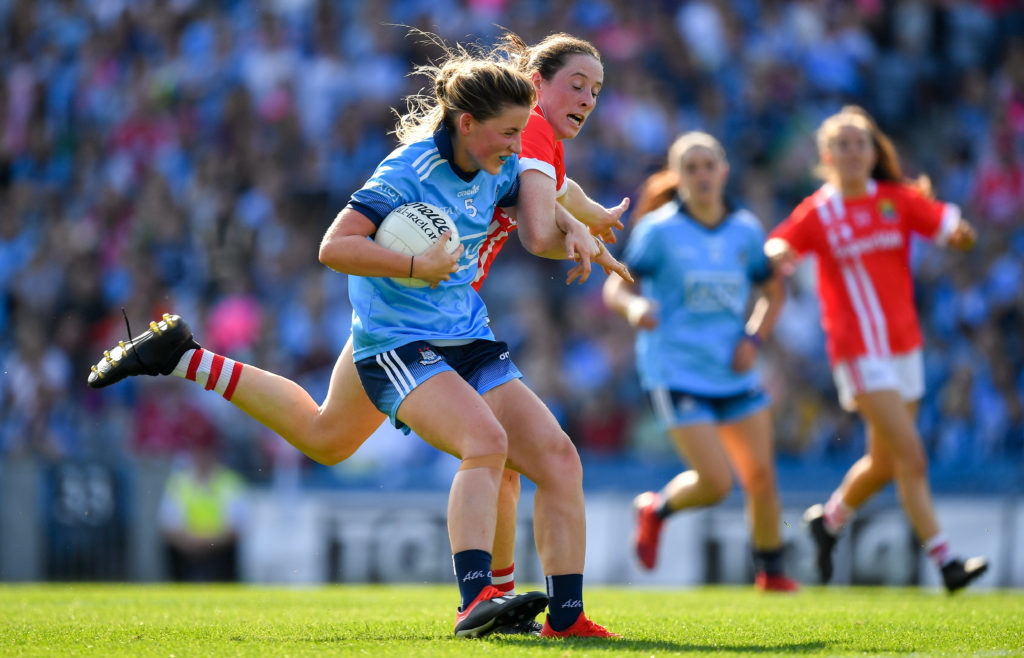 Aoife Kane of Dublin is tackled by Aine O'Sullivan of Cork during the TG4 All-Ireland Ladies Senior Football Championship Semi-Final match between Dublin and Cork at Croke Park in Dublin. Photo by Brendan Moran/Sportsfile

"People say they might be inexperienced, the quality is there. They are coming through as winners, so they are a good side."

The Thomas Davis player picked up the Player of the Match award last time out in the semi-final win over Cork. McGrath says playing both semi-finals at Croke Park, has left a real level playing field heading into the final.

"Now everyone has the experience of playing there. It's only three weeks ago so it's not going to be unfamiliar to anybody. I don't think there can be any advantage or disadvantage to anyone playing in Croke Park. We've all had the experience now."

The Senior decider is preceded by the Junior (11.45am) and Intermediate (1.45pm) finals, on a busy day of action at GAA Headquarters.

Fermanagh face Louth in the Junior final. The Erne County won this title for the first time two years ago, but struggled at Intermediate level last year.

Louth are contesting their second final in a row after losing to Limerick in 2018, and are aiming for their third title, having last won in 2015.

Meath take on a fancied Tipperary side in the Intermediate final. Should the Royals not prevail, it will mean that Dublin will be the only team from Leinster in Senior Championship action in 2020.