THOMAS BARR secured a historic bronze medal in the 400m hurdles at the European Athletic Championships in Berlin on Thursday.

Finishing in a season’s best 48.31 seconds, the result means the Waterford native becomes the first Irish male sprinter to win an outdoor European medal in the 84-year history of the event.

Barr started on the outside lane but was overtaken by eventual winner Karsten Warholm of Norway and Turkey’s Yasmani Copello on the final bend.

As the 26-year-old battled with Ludvy Vaillant for third place, the Irishman found another gear to pull away from the Frenchman in the final straight and secure a podium finish.

Speaking afterwards, Barr said the atmosphere in Berlin reminded him of the 2016 Olympics in Rio, where he agonisingly missed out on bronze in the event despite setting the Irish record of 47.97 seconds

“It was really reminiscent of Rio with all the Irish flags and fans out there. It all came together and I was raring to go from the afternoon to get out there,” said Barr. 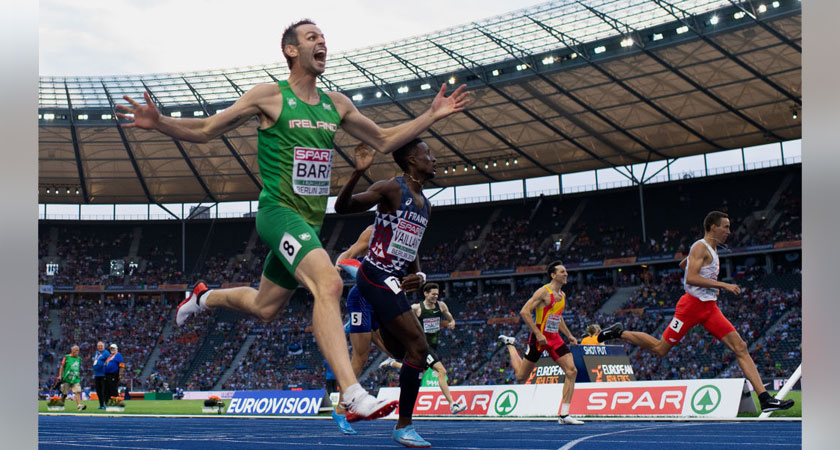 “I really wanted that hardware and to join Ciara (Mageean) and Mark (English) with medals along with the greats like Sonia (O’Sullivan) and Derval (O’Rourke). I’m just so happy it came together and I’m really thankful to all my team.”

“My warmest congratulations to Thomas Barr on winning bronze in the 400m hurdles at the European Athletics Championships today; a historic first for an Irish athlete and inspiration for so many people in Ireland.”

Meanwhile Ireland's Leon Reid finished seventh in the 200m final with a time of 20.37 seconds, just missing out on the Irish record.