Is it time the GAA allowed clubs to be compensated by professional outfits?

IN this year’s Cork-Kerry Munster U-21 final in Tralee, Kerry’s Mark O’Connor was struggling with injury throughout the first-half.

Management were about to take him off until he approached them at half-time. ‘Just give me five minutes,’ he said. ‘Five minutes, that’s all I need.’

O’Connor is such a unique talent that management relented. The first ball he got, he went straight through the centre of the Cork attack, and was fouled for a converted free.

With his second possession, O’Connor drove straight through the Cork defence again and scored an outrageous goal. It neatly encapsulated O’Connor’s rich amalgam of class and talent, fireproof confidence and mental strength, because he was true to his word.

Kerry got 10 minutes out of O’Connor because he couldn’t physically give any more before being substituted after 40 minutes.

O’Connor though, had made his name from making big plays. A year earlier, in the epic Cork-Kerry Munster minor football semi-final in Tralee, which Kerry won by one point after extra-time, Cork had a glorious chance to kick the winner late in normal time.

Cork missed the opportunity when O’Connor made a 60-yard run back towards his own goal to block the shot. It perfectly captured the broad range of O’Connor’s game which marked him out as possibly the best young prospect in Gaelic football.

His footballing pedigree is further underlined by his family lineage, with O’Connor’s bloodlines stretching back to the famed ‘Gega’ O’Connor family from Dingle. O’Connor also has tradition on his mother’s side through Tommy Doyle, who won seven All-Irelands on Mick O’Dwyer’s great sides of the 1970s and 1980s.

O’Connor had the capacity to win more All-Irelands like his relations, but, for now, those ambitions have been suspended.

Recently, he signed for Geelong on a two-year international rookie contract in the AFL.

O’Connor’s move is one of a number of Irish confirmed players who are taking on contracts with AFL clubs in the coming weeks; Ray Connellan (Westmeath), Kilkenny hurler Darragh Joyce and Conor Glass (Derry). Conor Nash, from Simonstown in Meath has also taken up an AFL rookie contract with Hawthorn Hawks. 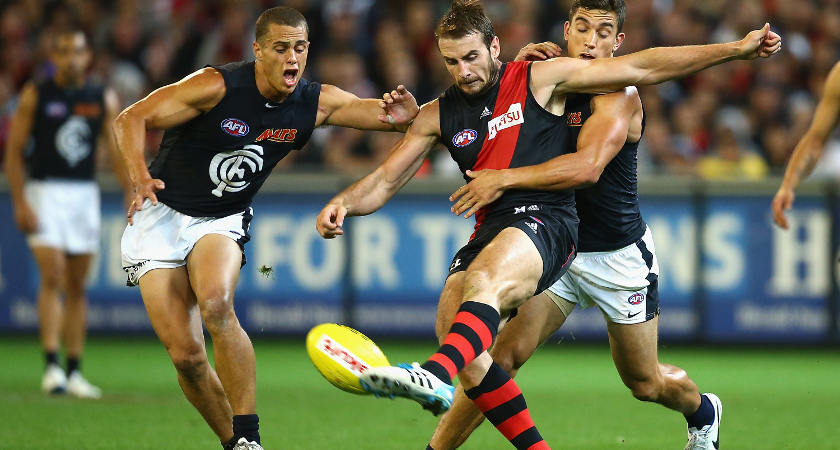 Professional Australian Rules Football clubs pay close attention to amateur GAA players [Picture: Getty]
“You'd be waiting for some superstars to come up through the ranks, your top, top players, and Conor Nash is potentially one of those players,” said Trevor Giles recently. “And now he's heading off to Hawthorn (Melbourne, Australia) in a few weeks.”

Nash helped drive Simonstown Gaels to a historic first county senior title only two weeks ago. He was still only a minor this year but he didn't play with the Meath minors, mainly through study commitments.

He looks set to be lost to the GAA now for the time being but if the AFL didn’t get him, Leinster Rugby – who also had Nash on their radar – may have claimed him instead.

As things currently stand, there is a sizeable pack of Irish players in the AFL, although a doubt remains as to whether Ciarán Sheehan will continue his career in Australia; Pearse and Cian Hanley (Mayo), Colin O'Riordan (Tipperary), Ciarán Byrne (Louth), Kildare's Paddy Brophy and Sean Hurley, Zac Tuohy (Laois), Kerry's Padraig Lucey, and Tyrone's Conor McKenna.

Given the huge numbers playing Gaelic football, the drain is not excessive but it does hit the players’ clubs the hardest. O’Connor’s loss to Dingle is incalculable.

Two weeks ago, former Kerry player Declan Quill said that Dingle should be financially compensated for the amount of time and effort put into the development of O’Connor. Quill saw how much Kerins O’Rahillys lost when Tommy Walsh left for an AFL career in 2009.

“It’s harsh on the clubs,” said Quill. “When Tommy left the club, I felt it should have been compensated. Maybe not compensation for the county – the likes of Kerry will always have strong players – but definitely the club deserves something.

“We lost him for five years. We missed him in a Munster club final (2009). You look back on your career and that was one of the medals that got away from us. As regards compensation, pulling a number out of the air, say Geelong had to fork out €50,000 to Dingle for taking Mark. They might think twice about coming over if that was the case.”

This is nothing new. As far back as 2009, the GAA rejected a proposal that would see Irish clubs compensated by ‘a transfer fee’ for players lost to Aussie Rules. AFL football operations manager at the time, Adrian Anderson, told The Brisbane Courier-Mail that transfer fees similar to those which Australian clubs paid for players supplied through the draft system had been discussed.

However, the GAA were fearful that such an arrangement would encourage clubs to act as virtual feeder outfits for Aussie Rules clubs looking to farm available talent beyond their own shores.

The AFL though, still have no issue with compensation. According to Tadhg Kennelly, the AFL’s International Talent Co-Ordinator, the AFL are still agreeable to the idea of compensating clubs and have even broached the subject in several discussions with the GAA.

Yet Kennelly also claims that the GAA have dismissed the topic each time. Money changing hands clearly smacks of some form of professionalism, and setting a precedent Croke Park would not want to go near.

The AFL have now expanded their talent scouting net worldwide. As part of its International Talent Identification Programme, the AFL carried out their European Combine in University College Dublin only last weekend.

One French player was tested at the combine, which was just one of a number held this year in New Zealand, North America and Asia. Yet with such a crossover between Gaelic football and Aussie Rules, there is nothing to stop the GAA from continuing to be a breeding ground for the AFL.