Tom Coventry: 'London Irish won't give up the fight just yet'

LONDON IRISH head coach Tom Coventry is refusing to give up the fight for survival despite his side being on the brink of relegation from the Aviva Premiership.

After losing 13-6 to their closest rivals Newcastle Falcons on Sunday, the Exiles are seven points adrift of safety with two games to play, meaning nothing less than two wins from their remaining two games will do.

Even then, Irish must hope Newcastle fail to win or draw their last two games without picking up a bonus point, leaving the destiny of Coventry’s men out of their own hands.

London Irish’s next game is Harlequins at home in two weeks’ time, but their final game of the season is a trip to second-placed Wasps, who still carry hopes of topping the table, which Saracens top by four points.

Despite the grim reading, Coventry is putting on a brave face and insists his side will give everything they’ve got so long as it is mathematically possible to stay afloat.

“I’m a positive person so, you have to think of the mathematical equation and you need to provide a bit of hope for the boys,” he said. “It’s not a hopeless situation. We’re going to have to be very good to beat two very good teams but you would have seen a couple of weeks ago when we played Harlequins at home in the (Challenge Cup) quarter-final, we weren’t too far away. 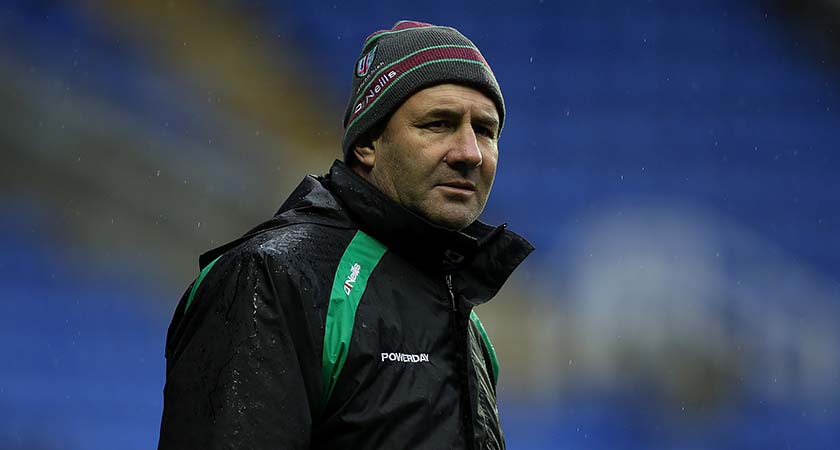 “We led with 15 minutes to go then they rolled over us in the last little bit there. We’re a very competitive team, there haven’t been many teams that have really got away on us so we’re going to have to manage those moments and find a way to get across the line in the big games, which we haven’t been able to emulate this year. We’ll just work hard and give the guys a couple of days off to refresh. It’ll be good to have a break, for them to lick their wounds and come back positive.”

Relegation to the Championship would be the club’s first since 1994 and although Coventry accepts the likelihood of going down is now very real, the club don’t have any direct plans in place to prepare themselves for the lower tier.

“We talk about that stuff but there’s no real plans yet,” he said. “That’ll come to a head in the next few weeks. The boys here will work through the rest of the season with us and do a job for next year as well. But the ramifications and reality of that we’ll have to wait and see. I expect the boys coming in to be here for the next year.”

In his first season since switching from his role as assistant coach at Super Rugby franchise Waikato Chiefs, New Zealander Coventry admits the culture of adding players his squad during the season is something he has struggled to adapt to.

“This year we’ve had to go to the market early and find players from outside of the club, which has been a challenge. But I think we’ve added some value through the course of the year by scouring the market. But that was a challenge that I didn’t envisage to be such a big part of the task at London Irish.”

London Irish duo retire as club braces itself for exodus