FORMER Irish international Kenny Cunningham believes that Ireland’s 3-0 win in Baku was a sign of progress and that Troy Parrott and Aaron Connolly could become key figures for the national side in the future.

Cunningham’s comments came following Ireland's most convincing result under manager Stephen Kenny. In total, they had 18 chances and were more positive than they have ever been under the former Dundalk manager’s tutelage.

In a week where Callum Robinson gained headlines for all different kinds of reasons with vaccine debate and a brace along with Chiedozie Ogbene’s header, the result was a hopeful sign of the good things to come, insisted Cunningham.

"Was it perfect? Absolutely not," Cunningham told Irish sports show Off The Ball on Monday morning.

"But generally speaking, I was pleased with what I saw. I think there's the bones of a team coming together there. I've seen it over the last couple of games despite some of the results. There was a period of time maybe six months ago...I wasn't too sure in terms of formation and where we're going, in terms of personnel, even combinations.

"The last couple of games it looks like Stephen has settled on that back three and the wing backs so that's good. They're the foundation blocks." 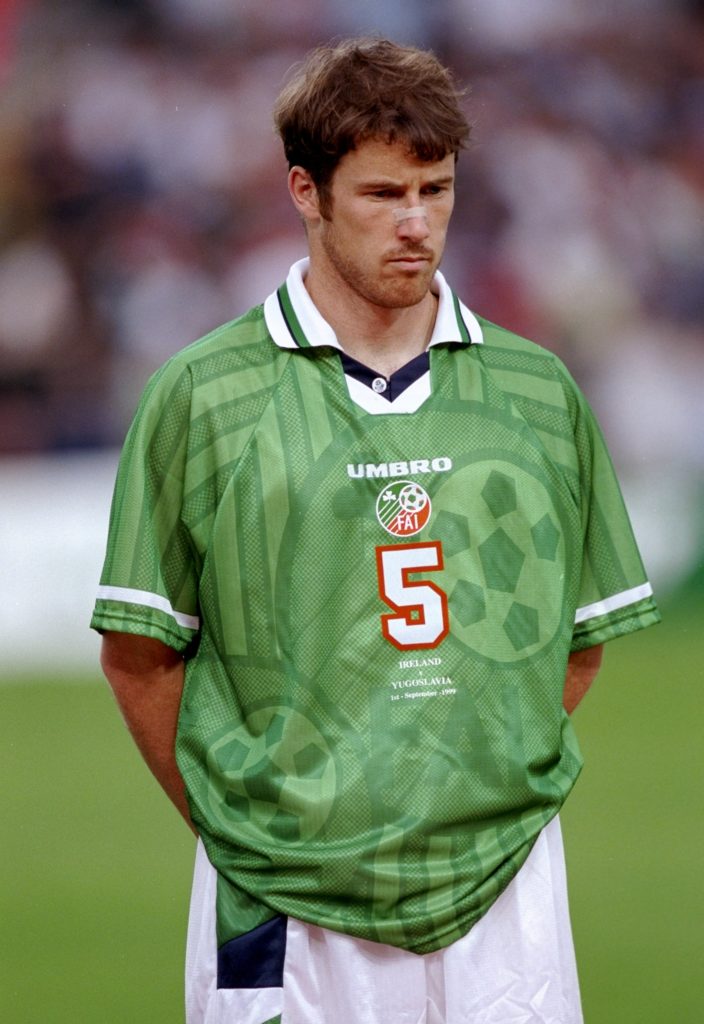 1 Sep 1999: Kenny Cunningham of the Rep of Ireland lines up prior to the match between the Republic of Ireland and Yugoslavia in the European Championship qualifying game at Lansdowne Road, Dublin.

Cunnigham also gave positive feedback to young Ireland duo Troy Parrot and Aaron Connoly. He acknowledged that both players didn't suit Ireland's current system perfectly, but remained hopeful that the right balance would be struck to accommodate both promising youngsters in Kenny's side.

"The more I look at Parrott, he played right of a three that night against Azerbaijan. I'm not too sure. He looks like a player for me that has to play in the central area. He'd like to play upfront on his own or in a central striking pair. Playing right of a three, there's real significant differences there," Cunningham added.

"Parrott played everywhere for Ireland's under-21 team and was effective everywhere. At senior international level, it's a tougher task to do that. He's naturally a striker or someone who can play in the hole behind a striker. Fitting him into this current system will be difficult.

Both may get another chance to impress Stephen Kenny when Ireland play Republic play Qatar in the Aviva Stadium on Tuesday night.