AS the sun scorched the earth (and the crowd) at Giants Stadium in East Rutherford, New Jersey, Ray Houghton’s speculative punt from the edge of the area sent a nation into a state of ecstasy .

Having suffered defeat at the hands of hosts Italy during the 1990 World Cup at the quarter final stage, it was somewhat fitting that Jack Charlton’s men faced the Azzurri on the opening day of the following tournament in 1994.

Similarly fitting was the fact that this time, Ireland - effectively - had the home-field advantage. With a huge Irish-American presence and with Irish heritage so intrinsic to the east coast, an explosion of green spattered its way across the 75,000 seater stadium.

Serie A was arguably the strongest league in the world at the time, and AC Milan were the undisputed champions of Europe having thrashed Barcelona 4-0 in the Champions League final just a month prior.

It’s no surprise then, that the Italians, who would go on to lose to Brazil on penalties in the final, fielded a side oozing with talent (and stylish haircuts). Franco Baresi, Paolo Maldini, Alessandro Costacurta and ‘The Divine Ponytail’ himself Roberto Baggio lined up opposite the Irish, but the Irish, it must be said, had their fair share of talent too.

Denis Irwin, Paul McGrath, Andy Townsend and a young Roy Keane were amongst the Irishmen tasked with toppling one of the tournament favourites.

It was Aston Villa’s Ray Houghton though who ultimately stole the show. 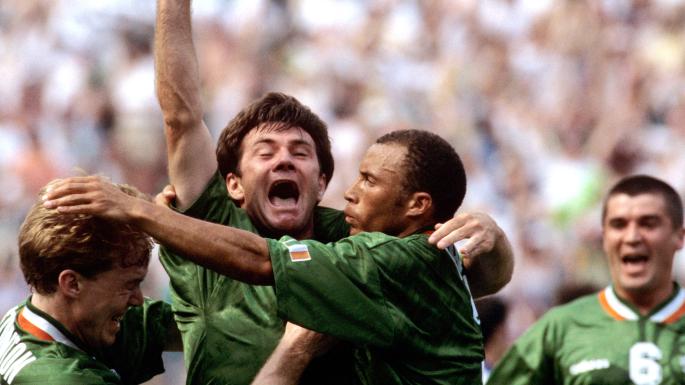 Taking it on his chest, the ball dragged him away from goal, and with four Italian defenders closing in, Houghton decided to try one.

With Gianluca Pagliuca creeping off his line, the midfielder rifled a left-foot shot from 25-yards out.

As it sailed over a flapping Pagliuca and fissled the net, the Emerald Isle erupted. And the rest, as they say, was history.

Houghton scrambled towards the nearest sea of green to celebrate, roly-polying as he went, but was quickly mobbed by his Irish brethren who, like the entire nation, thought for a split second that maybe, just maybe, we could do it, we could win it all.

79 minutes of swashbuckling Irish defending followed as the door was continually slammed in the face of the Italians. Then Dutch referee Mario van der Ende brought the whistle to his lips. Ireland had won. Guinnesses all round.

It was to ultimately prove to be the tournament high as Charlton’s side were beaten 2-0 by Holland in the round of 16 and were sent home, but Houghton’s wonder-strike lives on in infamy.

A quarter of a century on, it remains one of Ireland’s greatest ever sporting moments. Sadly, few moments in Irish football have rivalled it since. Robbie Keane’s last gasp equaliser against Germany (which was also celebrated with a roly-poly) in Kashima in 2002 comes close, but such glories have generally been few and far between.

But here’s to Ray Houghton, for giving us all a moment to re-watch and re-live forever.

Here it is again. Grand.