What's been going on at London Irish RFC ahead of the new season?

during the London Irish Media Session at Hazelwood Centre on May 4, 2016 in Sunbury, England.

IT HAS been a long, tough old summer at London Irish headquarters in Hazelwood.

Some old faces have gone, but some old faces have come back in too as the Exiles have turned to trustworthy sources – most notably Brendan Venter as Technical Director – with the club bidding to return to the Aviva Premiership at the first time of asking.

After an impressive pre-season campaign, including a 28-12 win over Harlequins, it’s business time this weekend as Irish open up their Championship campaign against Doncaster at the Madejski Stadium, their home venue for another season at least.

“It’s been a lively couple of months, shall we say, following relegation,” Bob Casey, club CEO, told The Irish Post.

“We did an independent review at the end of last season and we made the changes we felt necessary to really take this club forward.

“It was a major setback going down, but there’s still a long-term plan here, so we just need to make sure that we come straight back up.” 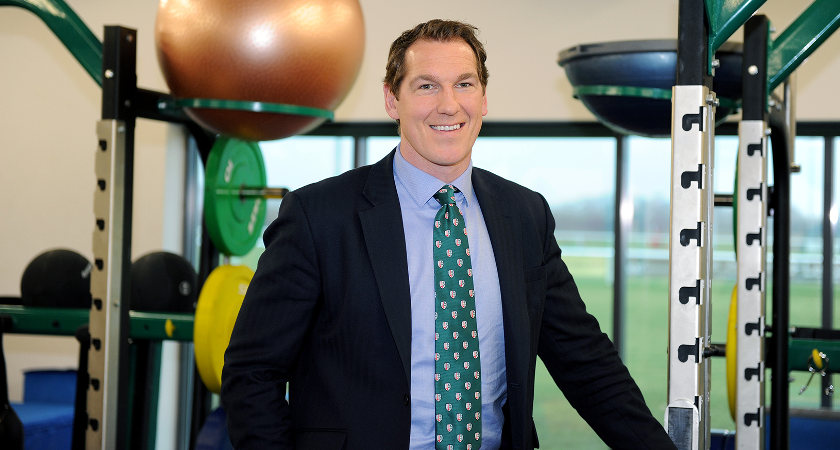 Bob Casey, London Irish CEO [Picture: Mal McNally]
Financially, relegation has hit the club hard, but the loss of TV revenue afforded to Premiership clubs through BT Sport’s coverage has been softened by the parachute payments in place for relegated clubs.

Parachute payments are designed to ensure relegated clubs are strong enough financially for the following 12 months. Problem is, if you do not get back up immediately, it becomes a real issue as clubs then lose capital from Premiership Rugby’s complicated but beneficial share system.

“There’s obviously a parachute payment for when you go down, but it’s only for one year,” stressed Casey. “Our priority has to be the rugby team and making sure, with the players and the coaches we’ve got, that we get back up at the first attempt.

“Unfortunately, we have had to make a lot of cost-saving redundancies, but we have some passionate people here off the field who know the business, know the club and work very hard. So, we believe we have the team that can help drive the club forward.”

Retaining key players has been crucial ahead of the new season. When London Welsh gained promotion to the Premiership they were rushed into recruiting 25 players over the summer of 2014, concerned that the players that achieved promotion were not adequate enough to survive the top tier.

They lost all of their games and picked up just one bonus point. 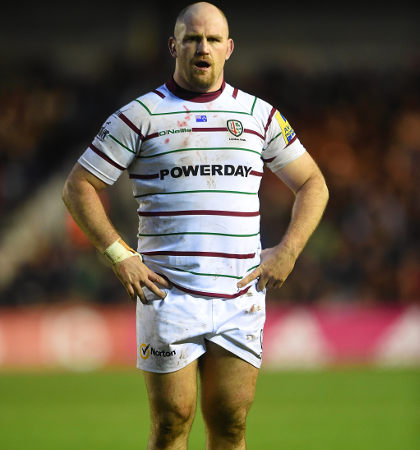 Key man Ben Franks [Picture: Getty]
With Premiership quality players still in place, Irish are well placed to bounce back at the first attempt and will have ready-made top-level players in key positions should they do so.

“Ben Franks, a double World Cup winning player, stayed on, as did Alex Lewington, our England Saxons winger,” beamed Casey, proud of the club’s ability to keep them two on side.

“We had interest in a lot of our players but they’ve remained loyal to us because they see where we’re going as a club. The thing is, we look after our players very well here, it’s a good environment to work in.”

And keeping top quality players, including fan favourite and club record try scorer Topsy Ojo, has also put a spring in the step of the rest of the squad.

“People like Ben Franks staying at the club has been a massive boost, and we have a few other internationals as well, which is good for the squad,” Scott Steele told The Irish Post.

“We’re a pretty tight group. Now we’re just focussed on getting off to a good start so that we can get back up to the Premiership.”

For the players, there have been adjustments off the field too. Although they still have the magnificent facilities at Hazelwood to come in to, the loss of personnel around the place has been a source of sadness as well as a wake-up call.

“Obviously, a few people are no longer with the club, from the players to the staff inside the club house, but everyone’s pulling together, which is really good to see,” added Steele.

“We’re now getting used to things like having to take home your own kit and wash it – stuff like that you maybe take for granted in the Premiership – but it’s been good for us, in a way. 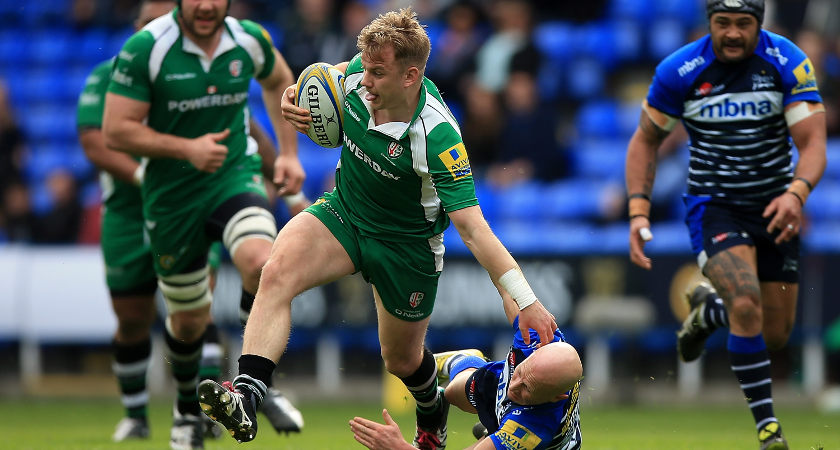 Scott Steele admits it has been a challenging summer [Picture: Getty]
“The glam of the Premiership isn’t really there anymore, but we’re all sticking together and we’re going to get through it. It’s not the end of the world and we’re taking it in our stride and getting on with it.”

With the glamour gone, the retaining of key players has been all the more remarkable, but it may not have been possible without the loyalty of several of the club’s sponsors.

“We’re absolutely delighted with our sponsors,” said Casey. “Powerday have stayed on board, Guinness have stayed on board – one of our longest-standing sponsors – and we’re delighted that VGC Group have joined us and Sean Fitzpatrick and his fantastic team, we share a lot of similar values with them.

“We also have the F3 Group who have joined us, which we’re delighted about, so we’re very grateful for our members and our sponsors for sticking by us through tough times.”

Another source of income for the club will be to continue renting out their Hazelwood grounds to top-class sporting outfits having welcomed a stream of star-studded squads through the gates of late.

“We had England training here recently and, yes, we’re looking to make this place work for us,” added Casey.

“We’ve had the New York Jets, we’ve had New Zealand, South Africa, Argentina, London GAA, Mayo GAA, the Jamaican Rugby 7s team, and we also do a lot with the local community because we have a fantastic 4G pitch here, which they can use.” 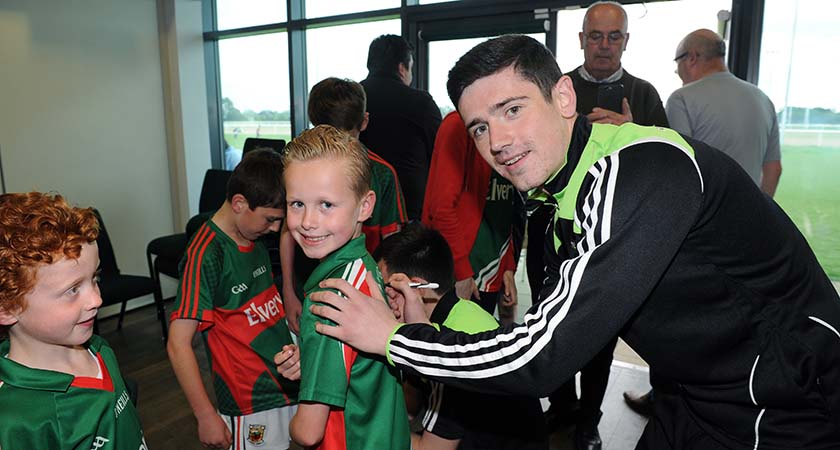 Youngster Joe Kilker with Mayo footballer Conor Loftus at Hazelwood [Picture: Mal McNally]
Speaking of the community, reconnecting with the Irish in Britain has been a key objective for London Irish over the past few years, and that project is moving along nicely.

“It’s coming on well,” claimed Casey. “We launched the London Irish Business Alliance (a business networking group which aims to bring together business leaders and industry experts to build relationships and inspire business growth) recently and after putting on three events, they’ve all been sold out.

“We’re also trying to get more Irish players in, but they’ve obviously got to be right for the group, though we have the right people in place to make sure they’re good enough.

“Jason Harris-Wright has joined us from Connacht, we’ve got Conor Gilsenan here from Leinster and, of course, Tom Court from Ulster. We’re making progress, but it’s going to take time.”

Bridging that gap between the rugby and GAA communities is also at a more advanced stage than ever, particularly after the recent visit of All-Ireland football finalists Mayo.

“They loved their week with us,” added Casey. “Their coaches and our coaches shared ideas, it was very enlightening.

“They have a very professional set-up, we were really impressed with them and we felt as though we learned from them, even though we’re the professional team. 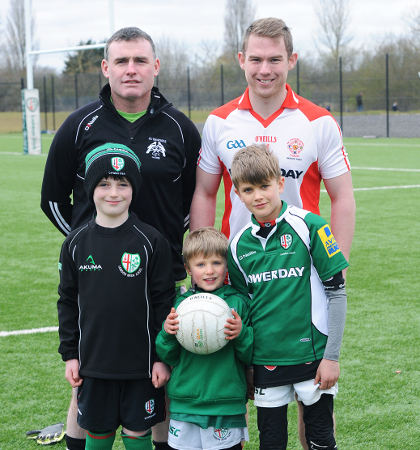 Jamie O'Donovan, Henry Clark and Joseph Clark with Chris Byrne of St Kiernan's and TCG's Liam Gavigan [Picture: Mal McNally]
“Gael London, a new youth GAA project set up by some of our coaches, train here at Hazelwood and get to use these fantastic facilities, which we want to share with the people. London GAA have been great with us.

“We’re working hard to reconnect with that London Irish community, but it’s difficult when we’re out in Reading, trying to get people out to games, but we’re moving in the right direction in that regard.”

That’s one of the reasons why a move back to their native capital is in the pipeline, with Brentford’s proposed Community Stadium in west London being a strong contender as a future home in the coming years, but it’s not the only option.

“We’re at the Madejski Stadium for the foreseeable future. We’re certainly going to be playing there this season, but our owners have made no secret of the fact that they are exploring opportunities in and around London, but as things stand we’re committed to Reading.”

A permanent move back to London might be some time off, but in the meantime the championship fixture list will provide plenty of games in the capital for Irish. There’s Richmond FC and the Ealing Trailfinders to visit, as well as London Scotland and London Welsh, who are both based in the Richmond area too.

“On the field, it’s a league that we don’t know that much about, but we are doing all our homework and we will make sure that we leave no stone unturned when we analyse each opposition,” concluded Casey.

“Injuries are always a threat and the standard of refereeing will be very different to what we came to expect in the Premiership, where they’re full-time, but we have got to make sure that we can control what’s within our control.

“Off the field, it’s a challenge because you’re not in the Premiership. The away fans, for example, there won’t be many of them travelling to us this season.

“We’re in a big stadium and as part of that we’ve closed the east stand, so we’re relying on the west stand. Ticket revenue will be down, but we just have to make sure it’s only for one year.”