As this year's Ryder Cup approaches, we have broken down the US and European teams. 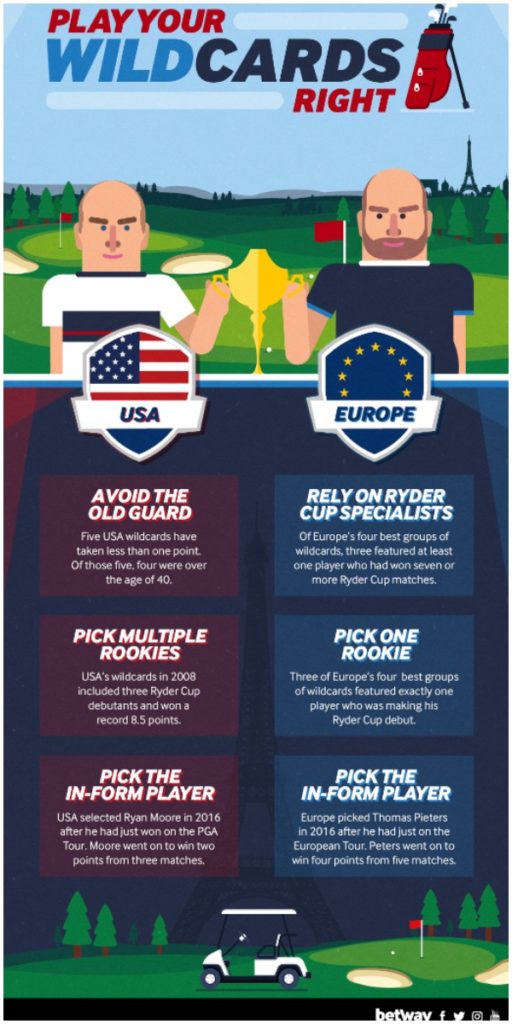 It is with good reason that European Ryder Cup captains have always relied on veterans for their wildcard picks.

Three of those groups also included at least one player over the age of 37, and also a player who had won at least seven matches.

Players like Ian Poulter and Sergio Garcia have been the foundation of Europe’s success in the competition since the early 2000s, so it’s hard to disagree with Thomas Bjorn’s decision to select four players who have all played in at least four Ryder Cups each.

Recent history would suggest, however, that the captain has made a mistake by not finding room for an in-form rookie.

Of Europe’s four most successful sets of wildcards, three had a player making his Ryder Cup debut.

That five rookies already occupy automatic places could explain Bjorn’s decision not to take another, but the 2016 Ryder Cup proved that inexperience is not a good enough reason to leave out a young golfer in fine form.

Rafael Cabrera-Bello, another rookie who had earned his place automatically, delivered two wins and a half from his three matches.

Meanwhile, Clarke’s other picks – veterans Lee Westwood and Martin Kaymer – earned just one point from a possible seven between them.

Bjorn should have taken a risk this time around and given Matt Wallace a chance.

The 28-year-old’s Made in Denmark victory was his third of the season on the European Tour, and August winners have a fine track record at the Ryder Cup.

In 2016, for example, Pieters triumphed in Denmark two days before he was included in Clarke’s wildcard picks, and was Europe’s best player at Hazeltine.

Clarke controversially left out Russell Knox, who had just won the Travelers Championship and climbed into the world top 20, in favour of Westwood, who failed to score a point.

Poulter and Casey are easy choices this year. The former has had a good season and is a formidable Ryder Cup player, while the latter is the world No. 16.

Stenson hasn’t been at his best and is dealing with a long-term elbow injury, but two major finishes of sixth or better this season earned him a spot.

Garcia, however, has been in wretched form since April. He has missed seven cuts in 12 starts with just one top 10 finish, and he failed to make the cut in all four majors.

The Spaniard’s experience makes him the safe pick, but, given Wallace’s form, probably not the right one.

Like Bjorn, Jim Furyk has put his faith in the old guard by selecting both Tiger Woods and Phil Mickelson.

The pair have played in a combined total of 78 Ryder Cup matches and earned 36 points, but have each lost more than they have won.

Woods and Mickelson’s stature in the USA team is so huge that Furyk really had no choice but to pick both of them.

American captains have always been better off picking youth and form over big-name veterans, though.

In 2008, Paul Azinger’s picks – the only group to take 8.5 points for a winning side – included three Ryder Cup debutants.

Only five American players in history have been selected as a wildcard and gone on to score less than a point. Four were over 40.

Only five American wildcards have ever scored three points or more. Four were under 40.

The USA only need to look back two years for a really successful Ryder Cup, when Davis Love III used his wildcard spots to pick four players aged between 27 and 38.

JB Holmes, Rickie Fowler and Matt Kuchar were all consistent players in their prime, while Ryan Moore, a rookie, was the man in form.

The 24-year-old was certain to earn a first Ryder Cup call-up after winning back-to-back FedEx Cup events, and he has unsurprisingly taken Furyk’s third wildcard spot.

The remaining place will likely be filled by Tony Finau – one of the most consistent players on the PGA Tour this year – or rising star Xander Schauffele, who has three top-six finishes from seven majors and won last year’s Tour Championship.

Both have arguably had better seasons than Mickelson, who has earned just one top-five finish since March and hasn’t finished higher than 22nd at a major in two years.

The abundance of big names and experience in this USA side means Furyk could have taken a calculated risk by going with both Finau and Schauffele.

Picking on form rather than reputation helped the Americans earn a comfortable 17-11 win in 2016, and that’s that blueprint Furyk should have followed this year.

This was written in collaboration with Betway.