A royal to do in Meath

Meath has history, culture, castles, towns, rivers and valleys – it even has its own unique snail, a crustacean called Helix pisana found on the Laytown and Bettystown dunes.

It’s a destination where you can fish, play golf, or attend the only official horse racing meeting on its beach, the Laytown Races. Just watch out for their snails. Or maybe you'd prefer to hike or bike along quiet laneways lined with ancient hedgerow, past meadows that are a shade of green only available in the middle of Ireland.

Already this year Meath Tourism has been going all out to promote their county round the world. Last September Killeen Castle, Dunsany, hosted the Solheim Cup, the premier event in women's world golf, and tourism chiefs have since been pushing Meath, with some justification, as Ireland's best value golf destination.

Check out www.meath.ie or www.northeastgolf.ie for details of packages that include the old links courses at Laytown and Bettystown, as well as parkland courses such as Kileen, Knightsbrook and Headfort.

History and Halloween come together in Co. Meath. The Meath - Where Halloween Began festival will be a headline event for the county this year with over 40 events including spooky stories, visits to eerie graveyards and storytelling sessions which are likely to include the odd ghost tale.

It’s not clear what Westmeath thinks about this — after all they claim, and with some justification, that the Hill of Uisneach is where the fireworks all began a few thousand years ago.

Nonetheless, the Meath people are adamant that the origins of Halloween lie at the Hill of Ward, or Tlachtga, outside Athboy. Overlooking the plains of Meath, Tlachtga, was one of the centres of Celtic power in ancient Ireland. It’s modern name The Hill of Ward, is taken from a 17th century landowner.

Nearby Tara, whose very name exudes vanished glory, would have been the political focus for the Celts, giving the county its “Royal” suffix.

According to ancient tradition Tara, from the dawn of history, was the seat of the High Kings.

Here St Patrick is said to have arrived at the very start of his mission to convert the High King Laoghaire. The king looked out to the north and saw Patrick’s paschal fire burning on the hill of Slane and was thus converted.

Meanwhile Tlachtga was the religious centre of the Druids. Before the arrival of Patrick, the High Kings would have turned here for their religious devotion. And this, it is claimed, is the birthplace of a festival which is today celebrated globally, Halloween.

The Meath - Where Halloween Began festival this year will include a torch-lit procession from Athboy to the top of the Hill of Tlachtga on October 31.

Speaking of fire, Meath County Council and the Kells and District Tourism Forum. The Kells Forum have called for the Olympic Torch to stop at Teltown, outside Kells, on its way from Newry to Dublin.

Teltown is the home of the ancient Tailteann Games, which date back over 4,000 years to 1829BC, thus pre-dating the ancient Greek Olympic Games.

According to Kells Tourism Forum secretary, Lucy O'Reilly, the hill of Tailtiu (modern Teltown) is one of the most important ritual landscapes in Ireland. The celebrated Aonach Tailteann and the Lughnasa Festival, were first held.

Ptolemy charted the course of the Boyne River in the second century BC - showing the familiarity that the Greeks and other travellers had with the area at that time," she said.

Whatever about the Olympic torch, to date the very proactive Meath tourism people have not been successful in getting the Book of Kells relocated in the county from Trinity College Dublin.

Meath people will point out that the Book of Kells was stolen in 1006 from the library of Kells monastery. When it was eventually recovered some months later it was found to have sixty pages missing, which have never been recovered.

This was of course in the days before black box flight recorders. I only mention this because, when the Book was lent to Australia, it had its own black box for the flight.

So if the absolute worst had come to the worst and the aircraft carrying the priceless manuscript Downunder had crashed in the sea, the Book would still have been recoverable.

Bookless though it is at the present time, Kells is still a fine stopping off place, equipped as it is with the Abbey of Kells and five large Celtic crosses.

Not to mention several fine pubs including Seamus O’Neill’s, a fine sports pub that features live bands, while the Arches and the Blackwater Inn both have splendid traditional music sessions going full throttle most nights of the week.

Indeed, musically, the county can hold its head up high. Turlough O’Carolan was born in Nobber in 1670. The influence of this blind 17th century harper, still influences and guides Irish traditional music today.

All in all, it’s odd, really, that Meath isn’t a more popular tourist destination than it is. Parts of it, of course, are on the well-trodden heritage trail, notably “beneath Meath”. 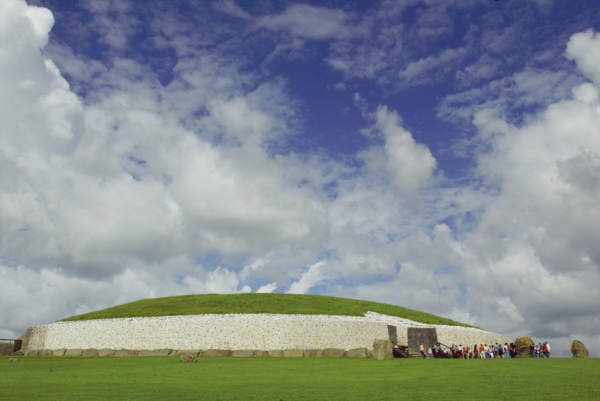 Newgrange is one of Ireland’s three UNESCO World Heritage Sites, and, despite sounding like a suburb in Essex, its passage graves are more than five thousand years old.

Brú na Bóinne, to give it its Irish name, is seriously interesting, and it has, consequently, huge visitor numbers – only a limited number of tickets per day are issued. But if you want to see passage graves in uncrowded circumstances, head for the Loughcrew Hills near Oldcastle.

About 30 passage tombs are scattered over four green hilltops, each commanding superb 360-degree views over the lush landscape.

Unrushed by coach tours which bedevil the busier sites, you’ll be able to walk from grave to grave, marvelling at the intricate engravings on the walls of the tombs, the while contemplating that even ancient man had a feeling that he should try to communicate with we-know-not-what.

Local folklore has it that the Loughcrew cairns were stones dropped from the apron of a hag as she flew over the mountain, called Sliabh na Cailllighe.

You won’t need me to tell you this translates as ‘the Hag’s Hill’. Her ghost is said to haunt the area still – truly a Meathylated spirit, and no doubt particularly active come Halloween.

Down in the valley you can visit the 17th century gardens of Loughcrew House. The walled gardens, a Yew Walk, water-gardens, a grotesque grotto, follies and rockeries and an arboretum of exotic trees make this a horticultural heaven.

History, more recent, is also in evidence. If you ever see the crossword clue ‘Neat Irish town (4 letters)’ you can take it from me the answer is Trim. The place is situated at the edge of another crossword clue – ‘Faded part of Ireland under Norman rule? (4 letters)’. Yes, well done, the Pale.

Trim Castle, in that neat little town, was the largest and just about the most important castle in Ireland. Its garrison of Anglo Normans watched over the dangerous natives, and took every precaution to ensure their castle was unwelcoming in the extreme.

Uninvited guests - of which you can be sure there were many - were treated to boiling water, tar, arrows, rocks, and other early weapons of mass destruction, rained down on them from overhead murder-holes.

The very model of impregnability, the castle’s thick granite walls are equipped with slit-like embrasures for the archers, and the unevenly spaced stumble-steps in the keep made the going as difficult as possible for intruders.

And don’t forget the ‘oubliette’, a word derived from the French ‘oublier’, to forget. Prisoners were simply thrown into this room and forgotten about.

Other castles in Meath include Dunmoe Castle and Athlumney Castle, set in rolling countryside, and worth a visit for castle fanciers and civilians alike.

But of course, it’s not all history and Halloween.

Meath can also boast one of the finest boutique hotels in Ireland, Bellinter House, just outside Navan.