1. Get a behind the scenes tour of the Millennium Stadium

It might seem odd to visit the Welsh rugby mecca when there’s no game on but The Millennium Stadium tour is an hour well spent. The tour gives you (very) up close and personal access to the players’ changing rooms, VIP box plus a perfect pitch-side and bird’s eye view of the impressive structure which holds 72,500 people and dominates the Cardiff skyline. You’ll acquire some handy fan facts to impress your rugby mates along the way (for example: each of the stadium’s 15 bars are equipped with so-called ‘joy machines’ which pour 12 pints in less than 20 seconds, and the stadium has its own resident hawk to keep match-interrupting pigeons in their place). Bet you didn’t know that. 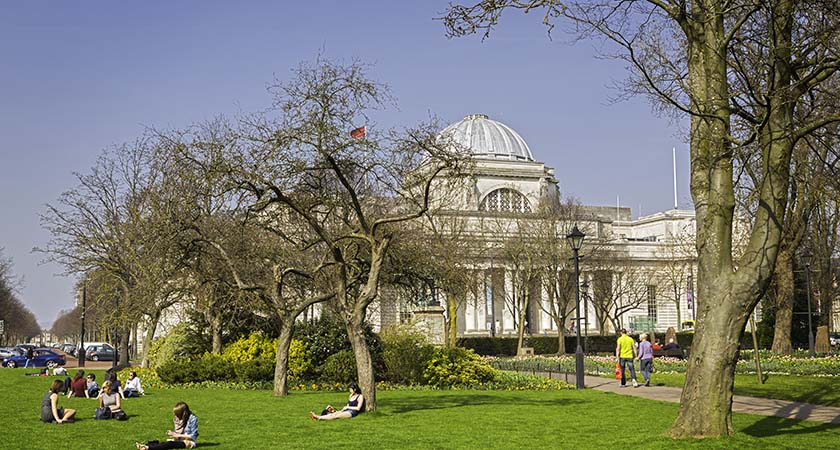 2. Indulge in a spot of culture at the National Museum of Wales

You can’t (and shouldn’t) miss the National Gallery and Museum of Wales — a big domed building next to City Hall. Check out the Evolution of Wales gallery if you like high tech stuff; or go straight to the Archaeology Galleries if Roman relics, Celtic Crosses and Bronze Age gold are more your areas of interest. The National Museum of Wales is also home to The Davies Collection where you can marvel at an outstanding collection of Impressionist and post Impressionist paintings  from the big hitters — Cezanne, Renoir, Rodin, Monet and Van Gogh. Not a rugby ball in sight. 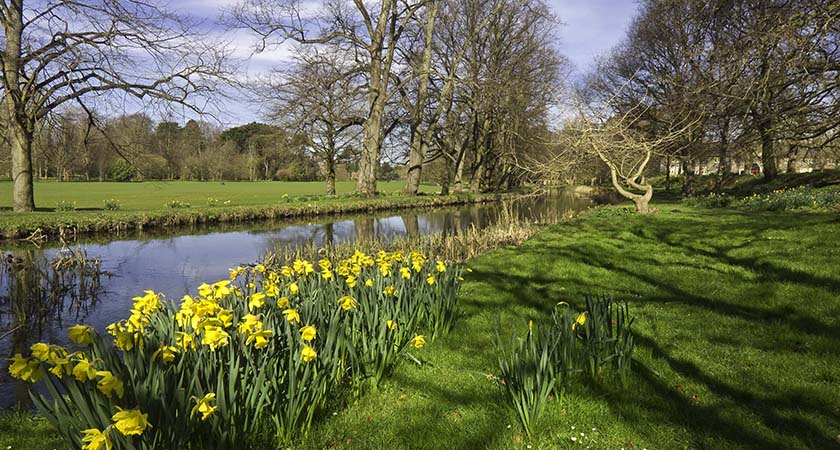 3. Walk, cycle and have afternoon tea in Bute Park

Weather permitting, Bute Park (bang smack in the city centre) is an idler’s dream. An immaculate spacious green area perfect for a peaceful walk or cycle  the park was designed in the late 18th century by the auspiciously named landscape architect Capability Brown and had alterations in the late 19th century by the third Marquess of Bute. In 1947, the Marquess of Bute gave the park to the people of Cardiff and they are making the most of it to this day. A stop in the Pettigrew Tea Rooms at the entrance for afternoon tea, or in the picturesque Secret Garden café near the park’s centre is highly recommended. 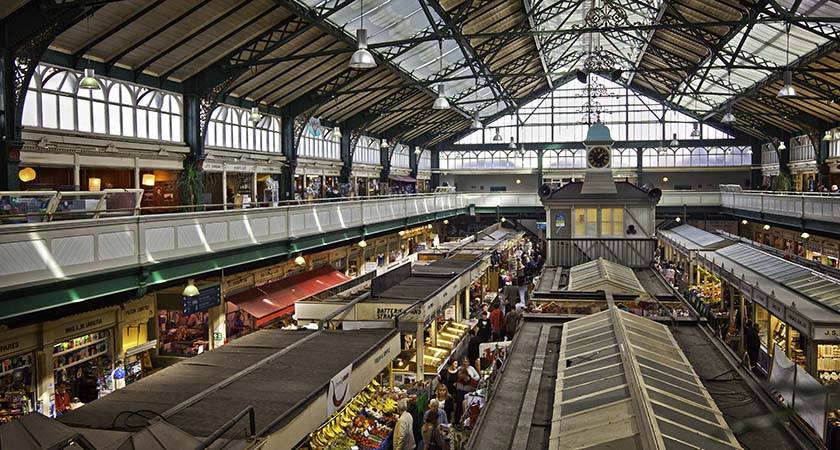 4. Browse, bargain and fatten up at Cardiff Market

From its humble beginnings as a farmers’ market trading in livestock and farm produce, Cardiff Market has evolved since its beginnings in the 1700s. There’s no livestock there today but its worth a look just to take in the original Victorian structure with plenty of remnants from the old world still on display. The market itself sells pretty standard fare — cheap secondhand books, flowers, very decent coffee and delicious cakes and a bit of bric-à-brac. For some more traditional retail therapy, head to Queen Street — Cardiff’s shopping hub and pedestrianised area. The St David’s Shopping Mall boasts the largest John Lewis department store outside London if that floats your boat. 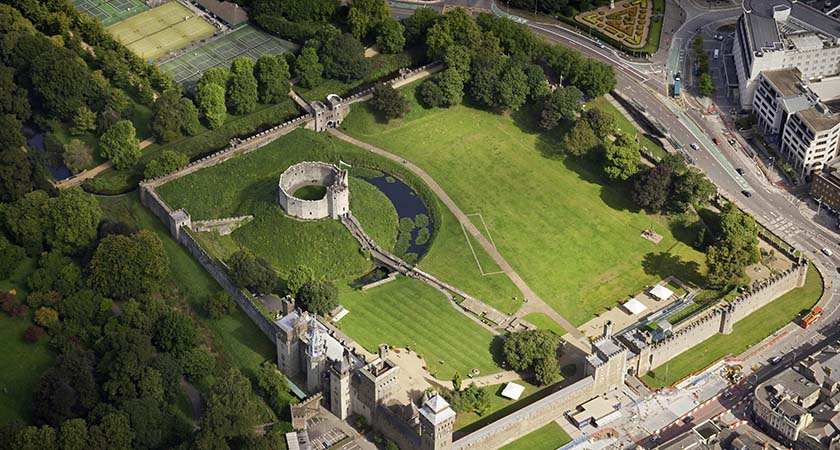 5. Get medieval at Cardiff Castle

There’s plenty to explore at Cardiff Castle. Depending on your level of interest you can take a guided house tour, check out the wartime shelters inside or just stroll around the exterior and climb to the top of the Norman Fort. It’s particularly good if you have kids, who can get involved with medieval reinactions and play with the Trebuchet — a replica of a 13th century siege weapon developed to attack the solid walls of castles. Although the castle was originally a Roman fort, it is now a mixture of buildings from all eras. The third Marquis of Bute, one of the richest men on earth, is the man responsible for making Cardiff Castle the mock gothic mixed bag it is today.

6. Chow down on the best veggie food you’ll ever eat

Had enough of the burger vans? A short walk from the city centre is Milgi — weird name, wonderful food. It ticks every foodie box imaginable — local, organic, seasonal but most of all, absolutely delicious. Beer battered haloumi, Mexican tortilla stacks and the carrot and coriander burger are stand-out mains — and you can tuck in out the back on the patio or lie back and digest in the backyard yurt. Wash down with a local craft beer, naturally.

One thing Cardiff is not short of is pubs and with 35,000 students in the city lots of them are cheap and cheerful. For something a bit different try Gwdihw on Guildford Crescent. The name is pronounced ‘goody-huw’, which is an owl’s ‘whit-whoo’ in Welsh) It’s very quirky, with higgledy-piggledy mismatched bright furniture and a decent beer garden out the back. Oh and it’s mighty craic. For a more hipster vibe try 10 Feet Tall on Church Street. It’s the kind of place where you get your cocktail in a jam jar, but the music is top notch if you want to dance and the crowd is (as is universally true in Cardiff) super friendly, not to mind very partial to the Irish. Do try a pint of the Cardiff’s very own beer, Brains SA, brewed in the city. If you need a bit of soakage after that  get yourself to Chippy Lane. No explanation needed. 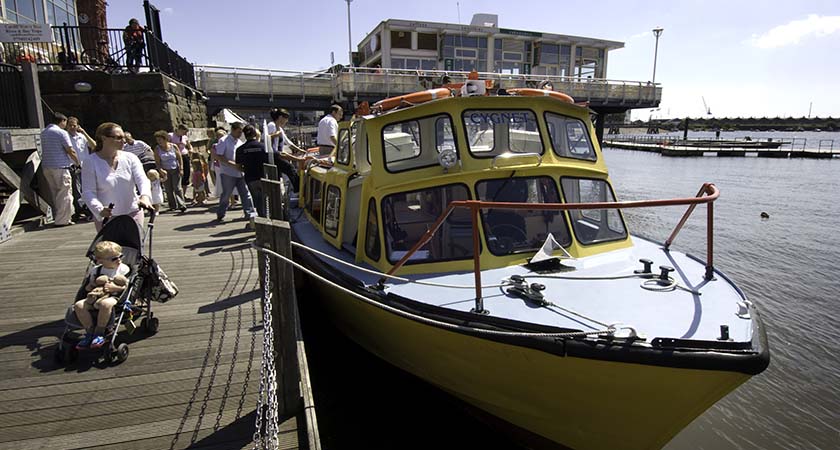 8. Relax and enjoy the view at Cardiff Bay

Before you go, take a boat trip (£3) from Bute Park and soak up the views at Cardiff Bay. Docks aren’t always the best place to hang out but Cardiff Bay has undergone major regeneration, being transformed from mud flats to a massive freshwater lake. Marinas, apartments, water taxis, opera houses and even a parliament building have all sprung up around the waterside and there are lots of shops, bars and restaurants to chill out in and people-watch.

9. Geek out at the Dr Who Experience

The Bay is home for the film locations for the cult classic BBC show Doctor Who (and its spin-off Torchwood). It’s a “multi-sensory experience” that fans will get a real kick out of. There are lots of props, costumes and monsters from the show, including Cybermen and of course the scene-stealing evil Daleks.