WITH a hunger to succeed in one of the toughest markets in the world, fueled by a growing technology sector, Irish architects have being quietly rising to the top of Britain’s construction echelons.

By design rather than accident, architects from Ireland have taken the lead in everything from ground-breaking public service projects to London’s booming residential developments.

Names such as O’Donnell and Tuomey – the 2015 recipients of the world’s most prestigious award in architecture, the RIBA Royal Gold Medal – have now become synonymous with success.

This year has been designated the Year of Design by the Irish Government and Britain has not been overlooked for a refresher course on the best the country has to offer.

Ireland features at large in this year’s London Festival of Architecture — a celebration of architectural experimentation, thinking and practice — taking place throughout June.

It will play host to New Horizon, the first of three events, which will present the work of 10 emerging Irish practices internationally.

Both boutique and larger Irish firms are now competing with world-class companies according to John Hunt, a Senior Advisor for the British Construction Sector with Enterprise Ireland.

“If we look back over the last five or six years, the environment which architects have been working within has been extremely tough, both at home and in the UK,” he says.

“There’s been a lot of pressure to differentiate and add value.

“It’s been a tough market, London in particular is an international market for design services.

"It’s a tough place to differentiate what you can do. But the companies that have, you really take your hat off to them.”

With companies such as Heneghan Peng (recent winners of a RIBA London award for the University of Greenwich Stockwell Street Building) and Grafton Architects being recognised in international competitions for their designs the Irish impact has been immense.

You also have the likes of RKD Architects and Scott Tallon Walker bringing engineering design and architecture seamlessly together.

Scott Tallon Walker, who have offices in Ireland, Britain and the Middle East, are presently working on a £250million cancer hospital and Proton Beam Therapy Centre at University College Hospital London.

With British patients who require PBT (a new form of radiotherapy cancer treatment) currently being sent for treatment to the US and Switzerland, the new London unit will eventually treat 750 patients a year, as well as providing 165 new patient beds for specialist cancer treatment. 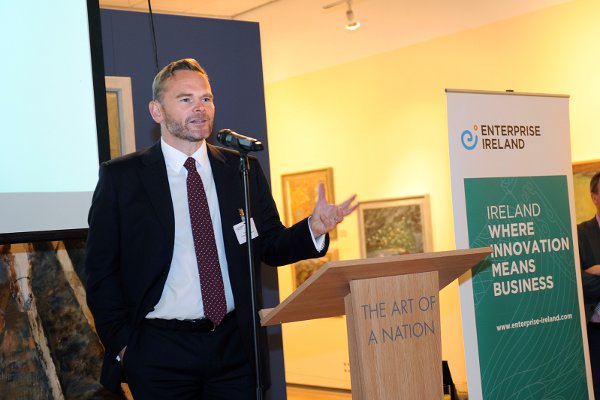 Enterprise Ireland's John Hunt at the launch of ID2015 in London

“One of the big changes in the last five to seven years has been the adoption of digital technologies to improve outcomes, performance and efficiency.”

Today all eyes are on digital design, engineering and Building Information Modelling (BIM) – something firms such as Coady Partnership, Scott Tallon Walker and RKD have embraced.

“They would really be leading that growth and drive internationally through their adoption of digital technologies,” he adds.

“BIM enables work in 3D, so where it’s always been flat and two dimensional, this is now the ability to work in three dimension, which helps to coordinate and plan space better.

"So for the clients it’s a real representation, a walk through their building rather a drawing.

"It’s really taking the industry forward. The UK Government are mandating BIM from 2016 for all Government procurement projects, so that’s really sped things up.”

With the lack of large-scale projects like the Olympics and with Crossrail now well-progressed, Irish firms today are staking a claim in key areas such as biosciences manufacturing, renewable energy and prime residential markets in Britain.

“What came out of Ireland during the Celtic Tiger and pre-recession was some real efficiency, process and design around residential projects,” Hunt says.

“A lot of those skills have been very useful within the UK and particularly London’s apartment development and boom with firms like Brady Mallalieu.

“Ireland will also be well placed in building UK infrastructure, roads, rail, airports — these kind of areas where Irish firms have historically and continue to this day to make a big contribution.

"UK investment in infrastructure, for the next five or six years, has been mapped out by the Treasury and looks to be an area of growth and opportunity for Irish companies.

"And tech will help to enable this,” he adds. “Years ago it was building roads, we’re now doing lots of higher engineering and design and going forward we’ll be enabling technologies and software that makes it all work.” 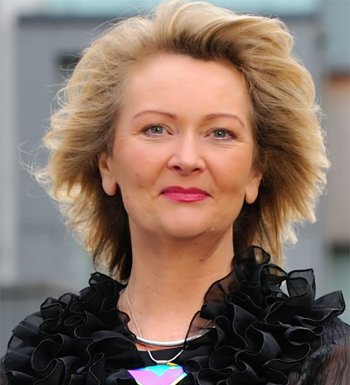 And making it work is what Angela Brady, Director of London-based Brady Mallalieu Architects, is all about.

Originally from Dublin, Brady has established herself as a well-known media personality and has a new four-part series on Irish architecture and design currently in production with RTÉ, due to air in September.

Having worked on projects such as Mastmaker Road’s award-winning 200 homes initiative for Ballymore on the Isle of Dogs, as well as housing projects for the Murphy Group, the Irish connection has proved a winning formula.

“We have a great trust and understanding of Irish developers, we all do our best as a team to really make a good building,” she says.

“I like working with Irish/UK teams because they are successful and do a good job. They are also fun to work with.”

But there are challenges too.

“Procurement is the biggest challenge for small to medium sized firms like ourselves, who have experience, talent and ability to do some great projects.

"But rules of procurement give advantages to the larger firms who do not do a better job but have higher than necessary Indemnity cover and turnover. Luckily some decent clients realise this,” she adds.

A former President of RIBA (Royal Institute of British Architects) Brady has recently published a book, The British Papers, featuring a selection of essays from people she considers to be leaders in British architecture and urban design.

“I would like to do The Irish Papers next,” she says. “It’s all about collaboration and sharing knowledge.”

A graduate of DIT Bolton Street’s School of Architecture, Brady arrived in London in the recession-hit early ’80s via a postgraduate scholarship in Copenhagen and a year working for an architect’s firm in Toronto.

She set up Brady Mallalieu Architects in 1987 with husband Robin Mallalieu.

“I always say good design costs no more money than bad design and that we are not building monuments to ourselves as architects but working to make the best living conditions for today in homes and schools that will stand the test of time,” she says.

“I have always been a campaigner, whether for having more women in our profession or saving much loved buildings, from Wood Quay in Dublin to Preston Bus station if it’s worth saving I’ll stick up for it.”

The Dubliner recently joined a celebrated panel of experts at a Royal Institute of Architects Ireland (RIAI) hosted exhibition focusing on current Irish architecture in Britain at the Vision Exhibition in London’s Olympia. 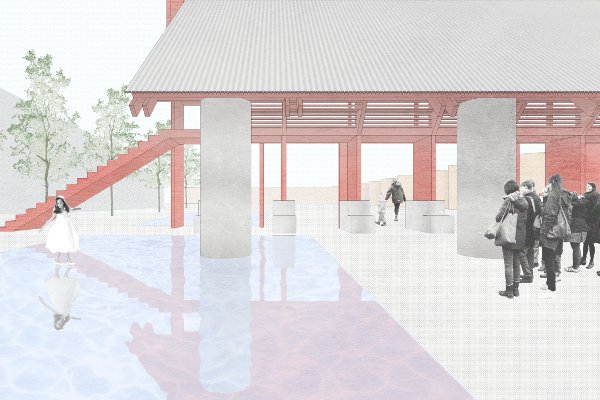 Born in Switzerland, educated in Ireland and now London-based, this former Young British Architect of the Year (1998) has just picked up a RIBA London Award for Peabody Housing’s Darbishire Place in Whitechapel.

An affordable housing building, it completes a group of six housing blocks and is a reinterpretation of the traditional five-storey mansion block paying homage to open staircases and balconies.

When asked how the Irish are contributing to the architectural industry in Britain, McLaughlin says: “Substantially. Many of the best Irish practices are building in London at the moment.”

Having just completed a visiting professorship at Yale University, he is now back to work on a number of projects with one at the Natural History Museum in London deemed to be ‘very interesting and special’.

Partnering with Kim Wilkie, the Irishman is working to create a new public space within the museum, which is visited by five million people per year.

“We are also just approaching completion on the new T1 Building at London’s Kings Cross for Argent,” he adds.

“It contains a low carbon energy centre, an indoor sports centre, a car park for the whole district, shops, cafes, restaurants and all kinds of housing — from social rented to homes for older people to huge penthouses. It is like a miniature city!”

With events planned throughout the year in Britain, Irish Design 2015 (ID2015) will allow people here to see first-hand the calibre of creativity flowing from Ireland.

“The aim of Irish Design 2015 is to bring visibility to Ireland’s dynamic design businesses, supporting them in trading in competitive foreign markets and ultimately creating jobs at home,” says Ged Nash, Irish Minister of State for Business and Employment.

The New Horizon project, debuting at the Lin June as part of ID2015, has drawn inspiration from the history of contemporary Irish architecture.

Amid that history is Group 91, eight firms who worked together in the early 90s on the regeneration of Dublin’s Temple Bar district. Many of those architects — including Sheila O’Donnell and John Tuomey — have since gone on to enjoy significant international careers. 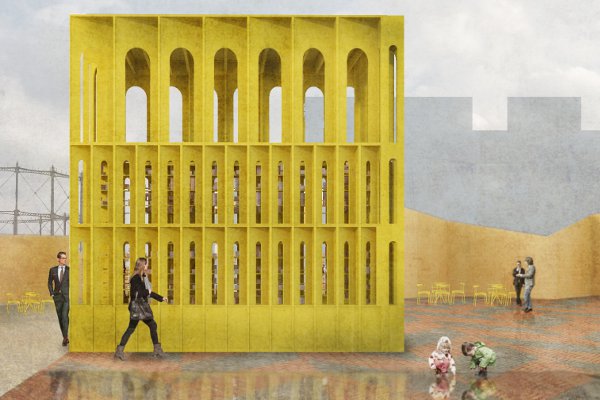 A four practice collaboration between Hall McKnight, TAKA, Clancy Moore and Steve Larkin will also see the construction of two pavilions — one red and one yellow.

“The architects were asked to make something which expressed their position or point of view in architecture,” says ID2015 spokesperson Leslie Curtis.

“The result is two pavilions in Kings Cross and one installation by Emmett Scanlan in The Tank at the Design Museum.”

She adds: “The two Pavilions at Kings Cross start with the observation that the city is a permanent work in progress.

"Located on Cubitt Square in a part of London that is undergoing dramatic transformation, these forces are particularly evident.”

“New Horizon from Ireland takes its inspiration from important thresholds in the history of contemporary Irish architecture, where the scope of this work is drawn from both Irish and global design culture,” adds Karen Hennessy, ID2015 Chief Executive.

“It looks to a better future.”

What's on: We built this city

A lively panel discussion about the impact the Irish have had on the physical and cultural development of London, from historic to contemporary times.

We Built This City is presented by the Irish Architecture Foundation in collaboration with Irish Design 2015 and the Department of Foreign Affairs and Trade.