KonnectAgain aims to improve university alumni relations for all

UNLIKE their counterparts in the States, educational institutions across Britain and Ireland have yet to master the valuable art of keeping in touch with their alumni.

In the US, Ivy League institutions often have between 20-30 staff members working on alumni relations – keeping close contact with the former students who can provide a lucrative network of support for schools, colleges and universities in their ongoing challenge to find funding.

“Irish institutions are often likely to only have one or two people working in their alumni relations department, while those in Britain may have just five or six” Aidan Murphy, of the newly-established KonnectAgain alumni network, told The Irish Post this week.

Launching this month, the Irish firm offers an online platform where institutions have “all they need” to engage with their alumni - through social media, fundraising campaigns and specific alumni networks and events - across the world, Mr Murphy explains.

The model works by offering educational establishments of all sizes the ability to set up an account which they can link to all of their alumni members and use to track their movements, career developments and contact details via their individual social media feeds.

Each institute pays an annual license fee for a basic, standard or premium level account with KonnectAgain, which can cost anything from €1,000 – €25,000, depending on the size of the establishment.

KonnectAgain will also take a percentage of the income generated through fundraising campaigns achieved via the platform from their basic and standard level clients. 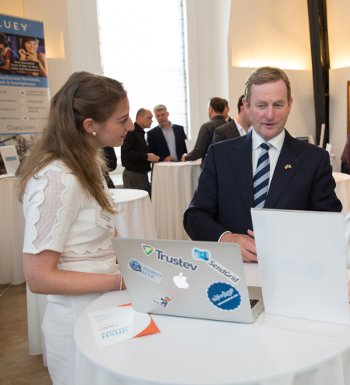 The concept is the brainchild of entrepreneurial University College Cork graduate Jayne Ronayne, who found little assistance on offer when she looked to the university for help connecting with former students as she launched her first business.

“When Jayne wanted to bring her first business to the US, she went to the alumni relations office in UCC to be put in touch with alumni in the San Francisco tech sector, but they didn’t have that information to hand and weren’t able to put her in touch with anyone,” Mr Murphy, Marketing Director at KonnectAgain, explained.

“She did some research and found this was a big problem being faced across the world, but largely outside of the US - which has a very strong culture of alumni relations.

“People would have a very strong tie to where they went to college or university in the US and they give back to those institutions, in terms of making donations, attending events or offering their time or services as mentors,” he added.

“That is not being utilised anywhere near as efficiently in Ireland or Britain, which is where KonnectAgain steps in.”

With the help of her friend, fellow UCC graduate Helen Flynn, Jayne set about building an online platform which would provide a long-term link between institutions and their past students, but also offer an exclusive network of contacts for alumni members to dip in and out of.

After a year in the planning and honing stages, that product comes to the market this month – at a conference due to take place in London.

“We are basically trying to give institutions an opportunity to stay engaged with their alumni, to continue to provide them support, keep in touch and let them know where they are and what events they are organising,” Mr Murphy explains.

“After they build that network and that trust back up with their alumni, down the line, if they are asking for support or a monetary donation, or some time from people who can help them out, it is far more likely to come,” he added.

A number of institutes have already signed up to KonnectAgain – including Trinity College Dublin, University College Cork and the Limerick Institute of Technology in Ireland and St. Chad's College at Durham University in Britain.

With two employees based in the US, the organisation will also be working on growing its presence stateside over the next 18-24 months, according to Mr Murphy, while investigating the potential for applying the KonnectAgain model to corporate and third sector clients.

On May 28 KonnectAgain hosts its first London conference at Regent’s University in Regent’s Park. It follows a similar event which proved successful in Dublin last year - where the Enterprise Ireland-backed company has its headquarters.  For further information or to attend the KonnectAgain conference click here