In 2015 TradFest celebrates a decade of banishing the winter blues. You’ll find something to suit every taste with headline performances, intimate ‘Front Row’ sessions and family-friendly events designed to bring you inside the music.

TradFest Temple Bar first appeared in 2005 as something of a modest proposal - a small niche traditional music festival, and a first for the Dublin City.

The intervening years have seen TradFest become something quite special - a festival showcasing the cream of both Irish and international trad and folk artists while also providing a springboard for the next generation of Irish musicianship.

From these modest beginnings the festival has gone from strength to strength.

The past decade has seen the festival grow in terms of size, ambition and musical breadth, with a line-up that now appeals to the purist and the merely curious alike.

Although Tradfest is now Ireland’s largest festival of traditional music it now also features artists from the worlds of folk, nu-folk, and even (whisper it) rock and roll!

This year’s headliner Donovan encompasses all three genres. Yet this is still a boutique Winter festival - closing the door on the darkest season and ushering in the light and energy of Spring.

The sweep and grandeur of Dublin’s millennium is on display every January.

From the breathtaking nave of St Patrick’s Cathedral to the elegant proportions of Dublin Castle and City Hall, TradFest is about marvel as well as music.

Our 2015 line-up is shaping up to be one of our strongest and most eclectic yet, with a roll-call of trad legends and new artists who are reinventing their genres. 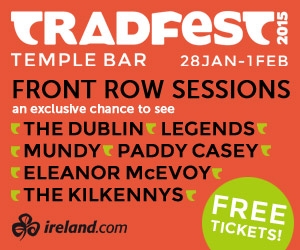 See below for how you can claim your free tickets...

Front Row Sessions is a unique event at TradFest featuring five of the very best in Irish music.

Taking place in the intimate setting of the pubs and bars of Temple Bar, you’ll get the chance to see The Dublin Legends, The Fureys, The Kilkennys, Eleanor McEvoy & Mundy.

Enjoy a once in a life time opportunity to see the very best Irish acts in their home country. Concerts are on a Thursday, January 29; Friday,  January 30 and Sunday, February 1 2015.

Irish Post readers, secure your FREE tickets now for an exclusive TradFest concert in Dublin – but you better be quick as tickets are limited!

To book your free tickets go to http://frontrowsessions.tickets.ie/ and use the code irishpost

#Tickets for the concerts will only be available via tickets.ie

#The tickets for the concerts are free, but the concert goers have to pay a limited postal fee which is €3.95 per order to cover postage to countries outside the ROI).