DESCENDANTS OF the delegation involved in brokering the Anglo-Irish Treaty gathered yesterday at the Irish Embassy in London for a special commemoration marking the centenary of the historic agreement.

The commemoration began with a private viewing of an exhibition of Sir John Lavery’s portraits of the Treaty’s signatories, including Winston Churchill, David Lloyd George, Michael Collins, and Arthur Griffiths.

Descendants were also invited to look at a copy of the Treaty – one of only two in existence – which bore the signatures of some of their ancestors, who made it happen.

Speaking with The Irish Post, Thomas Fawsitt – grandson of Michael Collins’s personal adviser, Diarmuid Fawsitt – explained how his grandfather had been instrumental in developing an economic framework for a new government of the Irish Free State following the Treaty.

“Although he wasn’t a signatory,” Mr Fawsitt said, “he was instrumental in the process of negotiation."

“Being from a known west Cork family, with links going back almost 500 years, he was trusted by Michael Collins, and was one of the unseen middle-men who brought an end to the War [of Independence].”

Mr Fawsitt also spoke about how his grandfather eventually moved away from politics, going on to become a well-respected lawyer and high court judge before passing away in 1967. 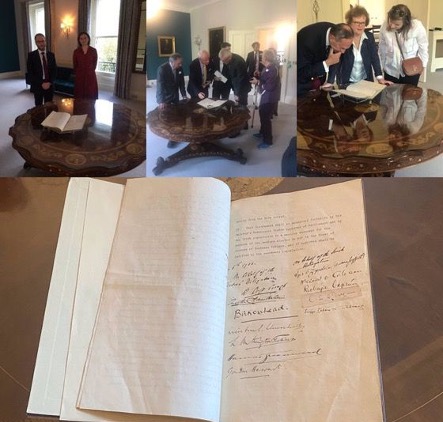 One of the signatories' relatives who was present at the event was the grandson of John Smith Chartres, an Irish civil servant and revolutionary who switched allegiances in 1920 from British intelligence to become a close confidant of Arthur Griffiths, the founder of Sinn Féin.

“There wasn’t a lot spoken about my grandfather’s involvement in politics,” Mr Chartres’s grandson told us.

“But I was delighted to see his photograph featured on the [Embassy] banner downstairs. It’s an important part of history, and it’s been great to see his involvement in that acknowledged.”

Following the viewing of the Lavery portraits and copy of the Treaty, descendants were invited to a drinks reception in the Embassy ballroom, where Irish Ambassador to the UK, Adrian O’Neill, welcomed family members and acknowledged the debt owed to their ancestors.

The event – dubbed The Art of Negotiation by the Irish Embassy – is part of a programme of events taking place this autumn marking the events of 100 years ago.