ROTTEN TOMATOES represents the most trusted measurement of quality for movies on the internet today and that’s certainly the case when it comes to Irish film.

All 21 of the Irish films that features on this list have been certified fresh via the review aggregation website’s fabled Tomatometer, but only five had earned a 100% rating.

Read on to find out the very best Irish cinema has to offer - these are The 21 best Irish films of all-time according to Rotten Tomatoes.

Cillian Murphy made his name as the star of this engaging drama about two brothers fighting a guerrilla war against British forces during the Irish War of Independence.

Paddy Considine and Samantha Morton starred as guilt-stricken Irish immigrant parents in Jim Sheridan's film, trying to make a new life in Hell's Kitchen while mourning the loss of a child.

Peter Mullan's film won the Golden Lion at Venice Film Festival. It tells the story of three young Irish women struggling with the harsh conditions of the Magdalene Sisters Asylum.

Judi Dench earned Academy Award and Bafta nominations for Philomena, the story of a woman searching for the son taken away from her decades ago in an Irish convent.

Inspired by the real-life Book of Kells Latin manuscript containing the four Gospels of the New Testament that resides in Dublin, this animated was also nominated for an Oscar.

Based on the Roddy Doyle novel of the same name, The Commitments is all about the rise and rapid fall of cinema's greatest band. Funny and full of great songs.

John Wayne wows in this engaging tale of an Irish-American;s journey to reclaim his family's Irish homestead. Wayne later described The Quiet Man as his favourite film.

Inspired by the character created by the late comedian Chris Sievey, this musical drama is notable for having all of its music performed by the actors on screen for real.

Long before his Bourne films, director Paul Greengrass directed this dramatization of the Irish civil rights protest and subsequent massacre on that fateful day in January 1972.

Irish filmmaker Jim Carney struck gold again with this story of a young boy growing up in 1980s Dublin, who starts a band in a bid to escape a difficult family life.

John Michael McDonagh's distinctly Irish buddy cop crime caper remains the most successful independent Irish film of all time and is well worth a watch.

Jim Sheridan recruited Daniel Day-Lewis to star as Gerry Conlon in this powerful real-life tale about the man falsely implicated for an IRA bombing plot in Belfast.

A rich period drama boasting a brilliant performance from Saoirse Ronan and stellar script from Nick Hornby, Brooklyn will tug on the heartstrings of emigrants on both sides of the Atlantic.

Shot on a budget of just $150,000 over 17 days, Once tells the simple love story of Dublin busker and Czech flower girl. It's songs and authenticity helped the film bag an Oscar.

Another Roddy Doyle adaptation, The Snapper tells the funny and poignant story of a small-town girl who gets pregnant and the fallout. Colm Meaney shines in a film lauded by critics.

Neil Jordan courted controversy with this story about a British soldier kidnapped by IRA terrorists. Famous for featuring arguably one of the biggest twists in cinema history.

Documentary filmmaker Alex Fegan visits a variety of pubs all over the Ireland, dissecting the institution of the Irish pub and what goes on behind the scenes.

This classic Irish family favourite focuses on a wily old codger and his battle of wits with the king of the leprechauns, while attempting to find a suitable husband for his daughter.

Rising star John Connors writes and stars in this gritty gangster drama which was made on a shoestring budget but earned rave reviews and Irish Film and Television Academy Awards. 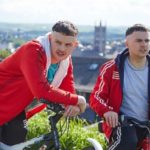 Now a highly successful TV series on RTE, The Young Offenders started life on the big screen, with a crime comedy inspired by a real-life tale of cocaine heist gone awry.

Made famous by Daniel Day-Lewis's method acting madness, My Left Foot is the story of Christy Brown, who fought back afrom cerebral palsy to forge a career in art and writing.