Campbell on the Turner Prize, filmmaking and life in Glasgow

Duncan Campbell is the first Irish person to win the coveted Turner Prize with a complex film that delves into Irish history, politics and Marxism. Katy Harrington talks to the Dubliner coming to terms with his win…

DUNCAN Campbell grew up in Swords, Co. Dublin. He studied for a year at NCAD then moved to Belfast to complete his degree. There, he became fascinated by the Irish socialist and civil rights activist Bernadette Devlin, making her the subject of one of his films. In 1996, as a strapped-for-cash artist, Campbell moved to Glasgow to study his Masters and never left.

Everything changed for the relatively unknown filmmaker when he was shortlisted for the Turner Prize 2014 earlier this year. Then on December 1, Campbell made history, becoming the first Irish person to win in the controversial prize in its 30 year history for his film It For Others.

Previous winners include some of the most successful, influential and wealthiest people in art today including Anish Kapoor, Antony Gormley, Damien Hirst, Steve McQueen and Grayson Perry. Not surprisingly, the morning after his win, he is still feeling a little dazed…

Congratulations on your win, how do you feel?

It’s still all sinking in; I’m still trying to get my head around it. There’s been a lot of anticipation in the days leading up to it so I still have to pinch myself.

The Turner Prize attracts so much attention, why do you think that is?

It’s really endured. If you go back 20 years, the Turner Prize was really the only show in town whereas now there are far more prizes for art. I’ve been involved in a couple [of other awards] in the past but nothing really compares to the platform you get with this to show your work. Over a weekend you would have thousands of people seeing your work.

Is having a large audience important?

The films I make are made to watch with an audience, for me as an artist it’s a really important component in the experience of the work.

You are from Dublin originally, what’s the attraction of living in Glasgow?

For me, Glasgow worked. When you’ve first graduated, as opposed to London, it’s a far more affordable place to live. It gives you more space and time to develop. You don’t get caught in this vicious circle of working two jobs to pay for a studio. Aside from that there is a really lively interest in the art scene. 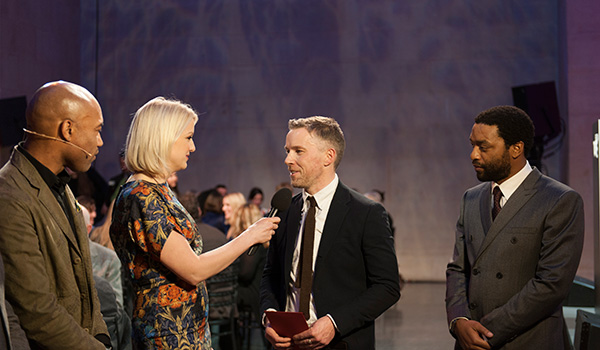 Do you keep in touch with the art scene in Ireland?

I’ve just opened a show at the Irish Museum of Modern Art. Generally speaking, when I’m back in Dublin it’s just to see family but I’ve been enjoying getting to know the city again. I think it’s very palpable the impact of all the cuts across the board to art institutions like IMMA who have had their budgets savaged, its remarkable that they are still managing to do the things they do given the austerity they had imposed in the last few years. I’ve really enjoyed spending more time in Dublin lately and having a reason to be there.

How big an influence did your time in Belfast have on your work?

Irish politics and history was part of my psyche growing up but living in Belfast definitely gave me more exposure to [political] figures and history. The film Bernadette which was about Bernadette Devlin… when I started making that, it was about something else. It was about a group she was involved with at Queen’s University… through that I started reading about her and watching footage of her so she started to take over as a subject.

It’s something that took hold and snowballed. That’s generally what happens with the films I make, there’s an evolution. The section of her political life I looked at from the late ’60s to early ’70s — she was an incredibly compelling speaker. I became very interested in how she was represented or misrepresented.

Tell us about the It’s For Others, the film you were nominated for?

It’s For Others is slightly unusual it terms of the three films I made before had a person at the centre. It’s a kind of a history through objects. I started looking at a film called Statues Also Die by two French filmmakers Chris Marker and Alain Resnais. I was interested in their central argument about the values that objects represented and the process of how they lose their value through colonisation. I took that and expanded it a bit historically, so there are more contemporary commodities. I also worked with the choreographer Michael Clarke and we tried to look at exchange and value in a more abstract sense, basically in the form of a series of dance sequences.

Where does the image of Joseph McCann come in?

There’s a section about an image of Joseph McCann the official IRA volunteer. It’s not about him as such but about a very iconic image taken of him that I came across in the research for the film. It’s about the journey of that image from being a bit of news reportage to being used for different propaganda and ultimately what it has ended up being — hollowed out, decontextualised, almost an anathema to the kind of politics he was fighting for in the first place. It’s about how meaning is contingent on time and place.

Can anyone watch the film and understand it?

I hope they can. I think ‘specialised’ is the best way of putting it but in terms of my own background and the way I make films, I grew up watching TV and I have a real interest in film and documentary filmmaking, so it’s not that fearsome reputation that art and video art has in a gallery that it’s intimating and incomprehensible. If you have interest in documentary filmmaking you’ll get a lot from the film.

Just boring stuff. Feed myself, pay the rent. It will make an enormous difference for me because of the economics of what I do as oppose to being a painter — there is a much bigger market for that kind of work. There is a limited market for the sort of work I make, so basically the prize money will buy me time and space to do what I do.

How has being in the spotlight and all the attention that comes with The Turner Prize felt?

It’s not something you are very prepared for going to art school. It was very bizarre at the start but I do see it as an opportunity to explain what I do and add to some kind of information. In terms of limelight, I don’t seek it out, but the work and providing some context around that… it’s not a bad thing if people are interested in what you do.

What’s next for you?

To be honest with you, beyond the ceremony, I haven’t thought very much about it. I’ll probably go back to what I was working on before the shortlist was announced and just pick up the pieces.