“WE'D love to have done it sooner but it’s just money and people being apathetic towards anything that’s slightly different,” laments Daragh Anderson, frontman of alternative band Codes.

He’s referring to their sophomore album Aaltars, which has finally landed exactly six years on from their critically acclaimed debut, Trees Dream in Algebra.

Anderson is relaying the tale of the band’s proverbial ‘difficult second album’ in Camden’s iconic music venue the Dublin Castle, having recently returned from the Irish capital itself for the launch of Aaltars.

The band have brought their energetic live show to the London venue before but on this Tuesday afternoon it’s pretty empty, save for two French tourists, a Polish couple and a middle-aged Irishman feeding the jukebox in return for everything from Queen to The Prodigy.

In that time they have lost not one, but two drummers — founder member Paul Reilly and his replacement Niall Woods. It’s not exactly percussion losses on the scale of Spinal Tap but a setback none the less.

Medical issues with one band member over the last 18 months also put recording and touring on hiatus, while a refusal to compromise with record companies on the sound they wanted for Aaltars means it’s an entirely independent effort.

If we did another Trees none of us would be happy — you’re not really being true to why you wanna do it in the first place. Even Trees in hindsight for me is a bit safe

Their labour of love saw the band, previously signed to EMI Ireland, taking part-time jobs to finance an album that, despite the lack of record company backing, charted in Ireland in its first week of release. A loyal fanbase has also played its part in turning Aaltars into a reality, thanks to a successful crowd-funding scheme.

“The reaction we got from the crowd-fund was unreal,” says Anderson. “I was really sceptical about A, should we be doing it and B, are we even going to get what we need to finish. We ended up getting that and going way beyond and it was incredible. That in my mind put us back on the rails — we had to finish this because people wanted to hear it.”

He adds: “We wouldn’t have had it out now if we’d waited any longer on finance because recording’s expensive and there are no returns. You’ve got no leg to stand on because you’re not getting much money from record sales any more and labels very rarely throw around money taking chances any more. And it also allowed us the freedom to do what we wanted to do which was the core of why we were bothering to do it in the first place.

“People who have no authority whatsoever on music, some guy in a suit, saying ‘nah it’s not enough like what you did before’ — I hate that. Who told Radiohead that? Who told anybody that? I’m not saying we have that kind of command, I’m saying art is art, if you want to make something good and want to make something for you, do it — so why make Trees again?”

Why indeed. Aaltars is a different beast from its more pop-friendly, melodic predecessor. Louder, darker, more technical and ambitious, the electronics toyed with on their debut are let loose here to amazing effect.

Aaltars sounds like an awesome sonic explosion fuelled by six years of frustration — and it’s well worth the wait. The album’s electronic technical precision is complemented throughout by Anderson’s beautiful, soaring vocals, never more so than in the frenetic Triangulum.

Unshackled from record label constraints, the band indulge themselves in the metal-infused And Arrows And Aarrows, while the eerie intro to Astraea and the ominous-sounding Irya (D), with its creeping vocals, typify the record’s darker tone. The glitchy electronic effects throughout only add to the unsettling mood as the melancholy of Trees is replaced by an aggressive energy channeled to perfection.

The band isn’t adverse to showing a softer side though, most notably in the Manics-esque Veila/Oceans and the infectious, beautiful Meridian Square. Bleed Blue, meanwhile, could slot in comfortably anywhere on Trees. 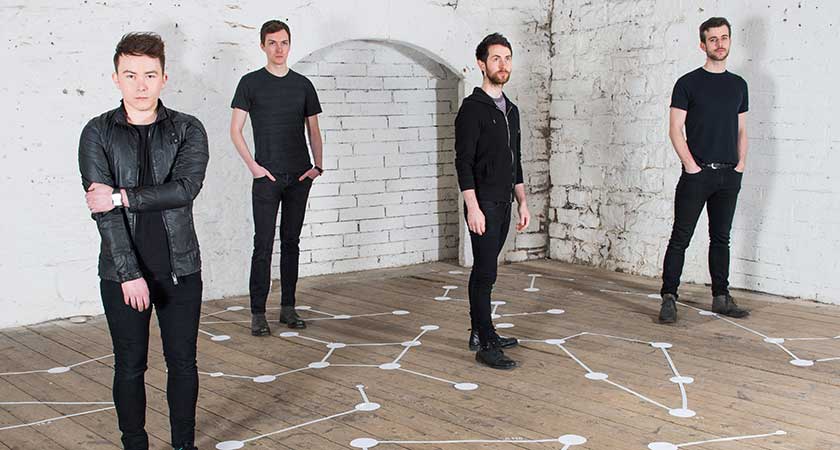 On the whole though, it’s a departure from their debut, a move Anderson says is intentional: “If we did another Trees none of us would be happy — you’re not really being true to why you wanna do it in the first place. Even Trees in hindsight for me is a bit safe. I worried way too much when we wrote Trees — ‘is that too complicated, is that too heavy?’ — but if we like it, surely it’ll be interesting to someone.

“[The new album] is more of everything, I don’t know if that sums it up. It’s much freer and that’s the most simple way I can describe it. The last song we wrote for Trees was Malfunctions. We kinda tacked that on at the start. People were like ‘wow, I wish the whole record was like that’. It’s so different and technical and electronic.”

“This record was all about playing the songs live,” he adds, “but also built around the idea that yes, they can be really technical but they have to be things that we can perform live and that we are playing everything. There was a couple of moments on Trees — and we’ve since toned down the way we play certain songs — that had a lot of samples on them live but now everything that we play is me or Ray triggering it as a loop with our feet, making it as organic and as live as possible.”

If you turn on the radio at the moment there’s so much stuff that sounds exactly the same — same producer, usually the same songwriter, banging you over the head with the same formula

It seems that, for a band renowned for their energetic live shows, it’s primarily via the stage and not the stereo that Codes want to reach their fanbase. Likewise the motivation for Aaltars seems to be as much a rebellion against the music industry in general as it was against making Trees MK II.

“If you turn on the radio at the moment there’s so much stuff that sounds exactly the same — same producer, usually the same songwriter, banging you over the head with the same formula,” explains Anderson. “It’s been like that for years obviously but it’s even more so now. It’s a bit more embarrassing now that you’re part of an industry that’s clutching at straws, trying to make money out of sh*te, beige, untalented crap.

“[Since moving to London] I started to care way less about things like radio play. We made Trees against the backdrop of Dublin, where it’s still so rubbish for a young artist because if you don’t fit in with the big radio stations over there, everyone’s like, ‘you’ve no hope’.

"But radio play is so f*cking irrelevant nowadays, I don’t know any of my friends who go ‘oh, I’ll try and discover new music, I’ll turn on 2FM’ and listen to the same f*cking Ed Sheeran song and Hozier on loop ad nauseam. Nobody does that so I don’t understand why that’s a benchmark and it’s weird that that mentality still exists in bands over in Ireland.”

Although airplay isn’t their motivation, a pragmatic Anderson doesn’t believe Codes and the airwaves are mutually exclusive.

“We’d never write a 14-minute prog epic and then go ‘the radio is so sh*t because they won’t play this’. But we think the stuff we have now is fair enough to play on the radio. But the problem radio has is, if you give them something abrasive and it goes against the grain at all, they treat everybody who’s listening to the station like an idiot and go ‘oh, they’ll just turn off if they hear anything like that.’”

Anderson jokes that the delay in releasing Aaltars has already left them with enough material for three records. Hopefully it won’t be another six years before album number three.

For now though, having endured a testing time since their debut, Codes are just happy to be enjoying the ride, making music on their own terms.

“We just wanna keep doing what we’re doing, tour, get out to as many people as possible, do as interesting things as we can do and just have fun with it,” says Anderson, “because that’s why you bother, slogging out doing all the other sh*t in your life — to go and have fun doing something that you believe you’re good at.”

Check out And Arrows And Aarrows from Codes' new album Aaltars below: