“THE big studio bosses had to decide whether to cut their losses or bargain with the Devil,” so says Irish-American film historian Thomas Doherty in his provocative book Hollywood and Hitler, a story that entwines Tinseltown with totalitarianism.

Covering the troubled decade of the 1930s, Doherty’s history reveals the deep moral dilemma that faced Hollywood’s Jewish-American figureheads (Samuel Goldwyn, Louis B. Mayer, the Warner brothers) and their uncertain reaction to the rise of the Nazis in Germany.

A critic with astute insight and a deft touch, Doherty illuminates how American popular culture tussled with Nazi propaganda and wrestled with its own conscience at the same time.

To understand the worry for Hollywood aroused by the ascendance of Hitler in 1933, it’s necessary to know the cultural crossover between America and movie-going audiences in Europe.

Irish film scholar Luke Gibbons has referred to the task set for American cinema after the First World War, when the new popular entertainment catered for various ethnic peoples and helped forge a collective American identity.

The ‘Esperanto of the eye’, is the phrase Gibbons uses.

But in making movies for all nationalities in the US, the indirect effect was to similarly create film output for all countries in Europe, particularly so during the silent era when the narrative was told through universal visual language rather than dialogue.

Consequently, Hollywood not only fed the dreams of immigrant moviegoers in the New World but also those of their Old World cousins.

This was especially so in Germany, where, along with America and the Soviet Union, film-makers were in the vanguard of transforming cinematic technology into an art-form.

The influence of German Expressionism is seen in, say, John Ford’s classic The Informer (1935) and in pictures like Chaplin’s Gold Rush (1925) — which symbolised grim struggle in a post-war world — each of which were box-office hits in both countries.

The overlap was rewarding, both creatively and financially.

As Doherty eloquently says: “The Hollywood-Berlin express benefitted both sides of the hyphen.”

So the lucrative market that Hollywood had nurtured in Germany during the 1920s meant the heads confronted a sensitive problem with the rise of National Socialism in the 1930s.

Hitler and his “cultural” henchman Joseph Goebbels were vocal in their damnation of what they saw as Jewish-dominated Hollywood.

Goebbels’ propaganda ministry expressed utter intolerance of any sentiment in American films seen as a slight upon Germany’s national character. 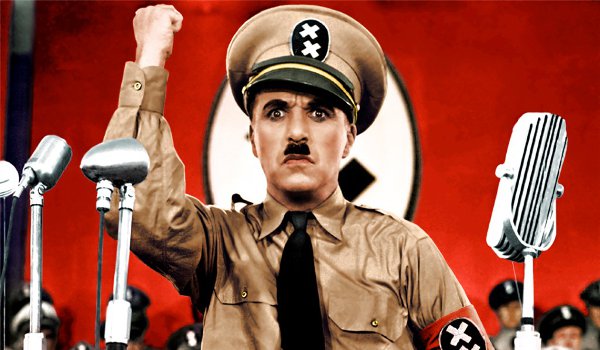 When Lewis Milestone’s All Quiet on the Western Front (1930) premiered in Berlin, it drew violent protests from Nazis who denounced its pacifist sympathies as “anti-German”.

So, as Doherty explains, MGM, Warner Bros, Universal and the rest had to decide if they should tailor scripts to placate Nazi demands or use their unique cultural platform to warn against the Nazi threat.

The latter choice might cost them their markets, the former their souls — they chose the former. Circumstances were further complicated by the large German-American movie-going base in the US.

Amidst this tension between Jewish-American film-makers and Nazi propagandists stood an Irish-American catholic. Joseph Breen was overseer of the Production Code Administration, the most powerful position in Hollywood censorship.

With Martin J. Quigley, another Irish-American, Breen helped draft what original censor Will Hays termed the ‘ten commandments’ of American cinema, guarding against impropriety on screen and depictions of sex, violence and religion.

One Production Code rule stipulated that “prominent people from all nations shall be represented fairly”, making it unseemly for American films to criticise foreign political leaders. This meant the studios, with Breen’s backing, could mostly avoid the ethical duty of showing Nazi brutality during the 1930s.

Not until the Second World War did Hollywood dare shine light upon Hitler’s iniquity. Chaplin’s masterpiece The Great Dictator appeared in 1940, but the cultural grounds for it existed five years before.

In illustrating this labyrinth of ambiguity, Doherty is an enlightened and engaging guide. He writes with an inviting style that has (mercifully) evolved in film scholarship in recent years, but retains his scholarly diligence.

However, Doherty has been challenged by Ben Urwand, another cultural historian and a Jewish-Australian. Urwand has produced a history entitled Hollywood’s Pact With Hitler and he doesn’t shrink from indicting the Jewish studio bosses as “collaborators” and traitors.

These are skewering phrases from a Jewish critic about significant Jews in history and they’ve generated much current controversy.

Popular critics like David Thomson and Greil Marcus have defended Urwand’s position, but Urwand’s view is that Doherty’s interpretation (critical though it is) lets Hollywood’s hierarchy off too gently.

Either way, both accounts are fascinating and unsettling about the time when dollars tangled with swastikas and the movie moguls pandered to the Führer.

Thomas Doherty’s Hollywood and Hitler is out now.