“YOU are going to die,” is the brutally frank mantra pinned to the bedroom wall of Coilin (Killian Scott), a luckless comedian in Brendan Grant’s buddy movie Get Up and Go.

An enjoyable, low-key, bittersweet comedy, Get Up and Go follows the failing fortunes of Coilin (pronounced “coe-leen”) and his less than helpful best mate Alex (Peter Coonan). It’s a film about trying to go somewhere but getting nowhere.

As a director Grant has been around for over a decade, though his output has been sporadic.

Previously his standout work was the experimental but patchy Kosovan-based drama Tonight is Cancelled (2007), with Mark O’Halloran and Antonia Campbell-Hughes.

In both writing and directing Get Up and Go is his most accomplished movie to date, an intriguing addition to the developing maturity of indie Irish cinema.

Coilin and Alex are a couple of slackers in their late twenties, just about to hit the looming turning point of 30. 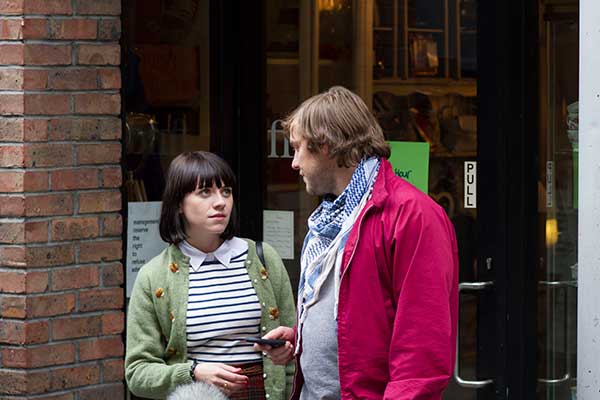 They’ve hung around Dublin’s artistic demimonde for over a decade, without much in the way of glowing success. Alex is a mediocre musician who’s been sacked from his post working at a local cinema.

Coilin is a comedian who can neither get a gig nor generate a sense of humour. At one time the lads could claim to be struggling artistes, now they just seem like tedious losers who couldn’t get a job to save their backsides. The message scrawled on the ceiling over Coilin’s bed reads: “Stop lying there and get the f**k up.”

But while the pair both exist in similar states of ennui, they are wildly dissimilar in disposition.

So, while Alex is a cocky wide-boy, Coilin is an anxiety-ridden milquetoast.

Alex is a lothario putting the moves on every woman he meets, Coilin is a shy neurotic who’s repressed about human contact: “Some people don’t wash their hands,” he complains.

Coilin loves a girl named Lola (Gemma Leah-Devereux) but hasn’t the courage to tell her; Alex is in love with himself and cares little about being disliked by everyone.

When Alex is told by girlfriend Sinead (Sarah McCall) that she’s pregnant with his child, he decides to flee on the ferry to England. Being short of funds, though, means he’s dependent on cadging cash from the people he so willfully abuses.

First he puts pressure on Coilin, then on any acquaintance casual or not, then finally on Sinead herself. Coonan (looking chubbier than usual) is an odd joy to watch as Alex’s self-serving popinjay.

His is a fine portrayal of a man resisting any insistence of moral principle. “Do you really want to be the guy who knocks up his girlfriend then legs it?” Coilin asks. “I’d prefer to be him than the guy pushing round a pram, wishing he was dead,” he replies. “You’re a f**king sociopath,” Sinead finally tells him.

That last quote gives an idea of how the movie develops. What begins as a fairly frivolous slice-of-life story following two ne’er-do-wells subtly evolves into a more serious self-revelation narrative.

When Alex wants to escape to London he exhorts an unwilling Coilin to join him. Coilin resists, feeling certain that the breakthrough he’s long awaited is just about to come. In their own different ways both men are denying an unwelcome reality. It’s their gradual and reluctant acceptance that lends their characters their dramatic arc. 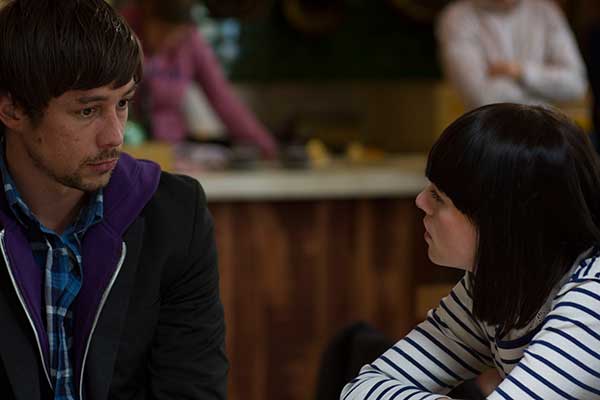 Sharp-eyed film buffs will hear echoes in this of Bruce Robinson’s classic hedonistic comedy Withnail and I (1987).

In ways not unlike Get Up and Go, Withnail and I covers the lives of two out-of-work low-grade performers (Paul McGann and Richard E. Grant), as they unwillingly come to terms with growing up, famously shouting the line: “We demand the finest wines known to humanity.”

While Get Up and Go doesn’t have the same sense of rollicking farce, it does have the commendable quality of slowly transforming itself and surprising its viewers.

Also, whether wittingly or not, Brendan Grant stirs memories of the quieter films of nouvelle vague master Claude Chabrol. Though Chabrol reveals the female perspective, notably in Les Bonnes Femmes (1960) and Les Biches (1968), he too shows everyday characters in everyday circumstances coming to terms with themselves. Less profound than Chabrol, perhaps, Grant understands that boredom needn’t be dramatically boring.

The action in Get Up and Go doesn’t amount to much more than bar room banter and banal bickering. Still, at its best it deserves comparison with Larry David’s Seinfeld, the exemplary narrative in which trivialities are significant and nothing means everything.

Where the movie slightly disappoints is in sometimes failing to exploit its full comedic potential. One scene where Alex blows his boat fare in the bookies starts strongly but ends weakly.

Nevertheless, Scott and Coonan share powerful screen chemistry and both inhabit their roles convincingly. Grant’s filming of Dublin locations conveys an earthy feel and there’s a wonderfully melancholic soundtrack. Get Up and Go? Go out and see it.

Brendan Grant’s Get Up and Go opens Friday, May 1