In Irish Post columnist Joe Horgan’s new book he explores themes of migration and identity. The following is an extract from People That Don't Exist Are Citizens of A Made Up Country…

I’M sitting in a car in county Cork looking out at the Atlantic.

I’m looking out at the Atlantic as so many have done before me. This is Ireland and this is a very Irish story.

Sometime in the middle of the 1950s, in his mid-twenties, my father grew tired.

By his own recounting he grew weary of a society where the few jobs that existed were given out on the basis of a nod and a wink.

He didn’t want to realise too late that the future was going on somewhere else.

He didn’t want to have to accept the so very little that was on offer.

He didn’t want to have to be so grateful. So he got on a boat. He got on a boat and he left County Cork and he went across the Irish Sea to Britain.

Alongside him, looking out from the railings of that boat, watching the lights of Cork harbour recede, was the woman who would go on to be my mother.

She was eighteen and leaving Ireland for the first time. I can see her now as I look in the car mirror.

I can see her sitting there in the back seat.

She was eighteen years of age and going across the Irish Sea to Britain. Across the cold expanse. Across the water.

I have a picture of her from around that time. She has long, curling black hair and a nearly ankle length skirt. It’s a photograph so it’s not her exactly but you can still see her.

You can see her eyes and her skin and that long, curling black hair.

In the rear view mirror I can see her now, the same woman some fifty odd years on. I can see her eyes and her skin and her shorter, still dark, hair.

She’s aged well. The lines around her eyes few, the greying at the sides little. She’s nearly six decades and six children on from the young woman in the photograph but it is still her. She’s still there.

Six decades on from getting off the boat. She’s still in the photograph too.

This book was written in the hills of rural Cork looking down on Dan and Margaret Murphy’s farm.

A short way along the lane from here, between two derelict outbuildings, a break in the trees gives a framed vista of the other side of the valley.

In the distance the traffic of the main Cork road and, in the rain, vast flocks of boisterous crows.

An old map of this area shows that there were once twelve dwellings in the yard at the top of this lane. There is now just one, solitary, house. It is a fairly sure bet, this being Ireland, that some of the people from those vanished dwellings went on to become immigrants, migrants, economic refugees.

On the walls of an Irish social club in England there is a painted version of this scene.

The boreen winds off above the chairs, the artist’s skill giving it the perspective of distance, and hay is cocked in the fields.

Whitewashed cottages dot the scene and at red half-doors men and women lean out.

At a table beneath I sit with my mother and father as they talk and drink.

The floor is sticky and on a Saturday night here or a Sunday afternoon big handed men dance with their women and they dance their way back home. Outside are the streets of an English city but inside are the immigrants and it is a different place.

My parents came to England from Cork in 1954 from an Ireland with little work and few prospects for a couple who wanted to start a family and build a life.

Prior to emigrating, their knowledge of Britain was scant but newspapers, cinema and word of mouth all spoke of a land with employment opportunities aplenty.

Whatever, though, about the ubiquity of their choice the emotional impact of leaving home was not lessened. My mother recounts that for the first six months she hardly left her rooms and that even the simple height of the buildings disturbed her.

The city they came to was purely a matter of chance. Manchester, Sheffield, Glasgow, London, were all places of work, all cities of immigration, but in the end, for no identifiable reason they can recall, they went to Birmingham and stayed there for over forty years.

So, in the English Midlands, far from their Irish beginnings and the imaginings of their early lives, they had a family in a city they had chosen at random the way some people might make a choice by sticking a pin in a piece of paper.

This is based on a singular, personal story, albeit that the sheer number of Irish immigrants to Britain makes any accounting of even that experience a shared one.

More importantly, though, is that a family story can be an insight into something that is more than ever a burning social issue.

At any time during writing this I could have stopped and pinpointed a report about migrants in the Mediterranean.

It remains the story of our time, whether it be through Trump’s Wall, Brexit’s psychological one, or orange bodied people bobbing in the water.

I’m from inner city Britain and my voice and my vowels, perhaps my face, betray only that.

But in looking for the bogeyman immigrant of tabloid imaginings I didn’t have to look far.

I just looked to the people I’d grown up with.

I just looked at those sitting next to me in the living room. 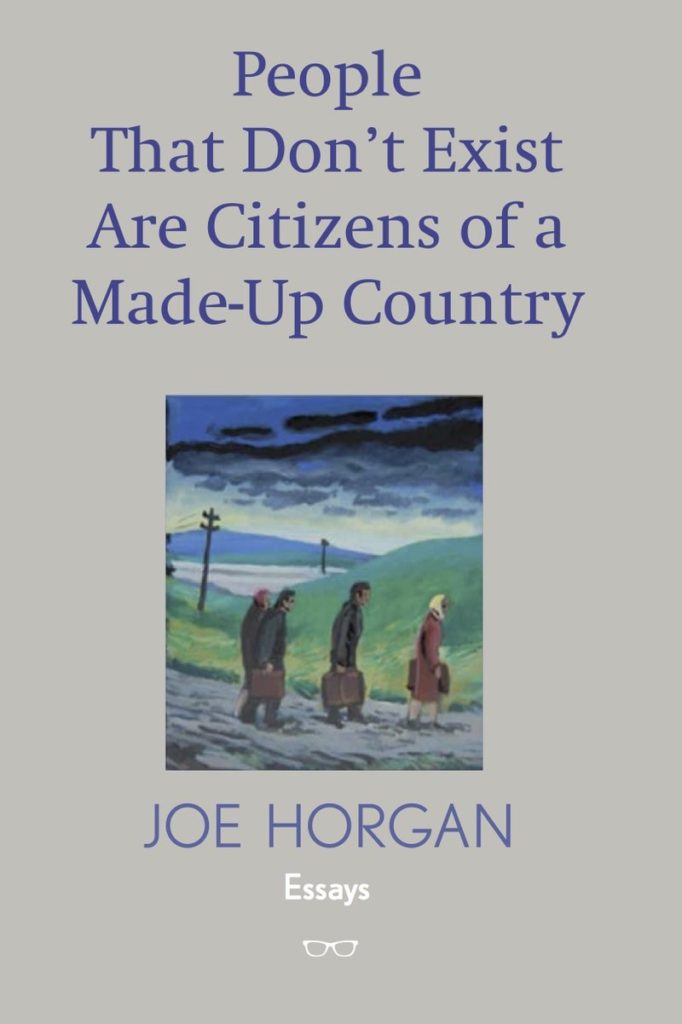 Joe Horgan’s book People That Don't Exist Are Citizens of A Made Up Country is available here.