Hozier on his debut album, overnight success and breaking the US

THE sleepy voice coming over the phone is that of Andrew Hozier Byrne. Or just Hozier to you, me and the other 10million people who got hooked on his deep blues voice when they heard his first single Take Me To Church.

The lyrics got their claws in too. The opening line ‘My lover’s got humour/She’s the giggle at a funeral’ has been sung back to him by festival crowds all summer. The video completed the hat-trick.

It served as a timely two fingers to homophobia, right in the midst of the Sochi Winter Olympics controversy with gay athletes. Take Me to Church was so dark, so dystopian, so decidedly un-Disney compared to everything else in the charts, no wonder it went viral.

Now with a debut album release imminent, a sold out US tour, a string of TV and radio appearances (including Saturday Night Live) ahead, Hozier is excited, but tired.

The 24-year-old from Wicklow has just touched down in Amsterdam. A few nights ago he played Koko in Camden. “Was that last night? It is Thursday today, right?” he asks, his memory slowly coming back.

“It was one of the biggest ticketed shows we’ve done yet. I’ve spent a lot of time doing festival gigs and promo, so to do a show to an audience who really wanted to be there was really energising.”

Playing closer to home feels good too. “You have a much more immediate grasp of an audience… culturally, their sense of humour, their mentality.”

This summer Hozier’s name was on the line-up at some of the biggest festivals here — Reading, Leeds and Latitude…the kind of gigs that many Irish musicians wait years to be offered, but he has pulled off the rare feat of breaking his home country, Britain and the US all in one go. So what’s the trick?

“The internet has no borders so my music got very far very quickly that way.” It’s also helped being signed to different labels in Britain and the States, with each looking after their own jurisdiction. “We work hard, we do a lot of gigs and radio visits,” he says. It’s not going unnoticed — a holy grail Saturday Night Live gig has just been confirmed. “It’s a big gig,” he says but live TV is still “nerve wracking”.

Like live TV and big solo gigs, Hozier is getting use to his new life and commitments too. I ask when he was last home in Wicklow.  He thinks for a while before deciding it was last week, but wait, no, was it? He racks his brains. Maybe it was around the time of Electric Picnic… He can’t recall but he knows he got home “for about 24 hours” to spend time with his family not so long ago.

That’s not to say he’s homesick. Touring is exhausting and he longs for “a bit of quiet time” but having spent so many years writing and recording songs in his attic, it feels good to be on the road, performing them to enthusiastic audiences.

From the outside looking in, Hozier is something of an overnight success, but to him it feels like he has been working towards this moment for years. 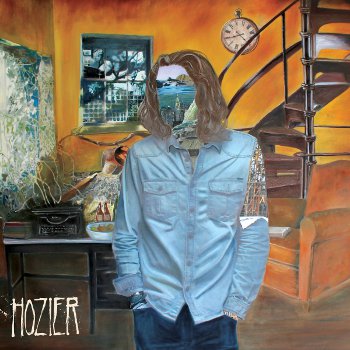 Still, when his career took off, no one could have predicted how fast things would move. This time last year he posted his music online for free and “never in a million years” did he think it would even make the Irish airwaves.

The last year has been “mental”, so how is he coping with fame? “I’m not famous, thankfully,” he argues, but in any case he is too busy touring to navel gaze. “Every hour is accounted for. I don’t reflect on it, I’m just working all the time. I’m not…” he trails off. Not throwing TVs out of hotel windows? “Not yet…”

Famous or not, the biggest pay off so far has been praise from fellow musicians. Adele is a fan and came backstage at his last London gig to talk shop. Playing Newport Folk Festival was another highlight.

Hozier watched “untold hours” of the famed festival growing up, and for a man who rarely gets three days in one place these days, getting to play and then hang out at the festival was more than a career high, it was a “life high”.

One of the lows of life on the road is losing touch with friends. “You do have to sacrifice a lot…You have you put your life aside and decide this is my life now. I don’t have a life.” It sounds like there hasn’t been much time to celebrate his success either. “I’m not one to pat myself on the back. It’s a waste of time.” The same goes for reading his emphatically positive reviews. “If you start reading reviews you start to get too happy with yourself…”

When he does read what is written about him, he gets to laugh about being misquoted “constantly”. Even his birthplace has been reported incorrectly. So let’s set the record straight, is he from Bray, Co. Wicklow?

“I’m actually not. I went to school in Bray,” he explains, adding that he is “more than happy” for everyone to believe he lives down a well somewhere in rural Wicklow and keep his real address secret.

On October 6 Hozier’s debut eponymous album [featuring artwork painted by his mum] is released here. For someone who doesn’t self-aggrandise he says he is proud of the production, happy with the album and keen to get writing and playing new material.

The songs were written and recorded in his attic in Wicklow, then worked on through the night with the help of producer Rob Kirwan in a studio in Dublin, making them sound “as pretty as possible”.

There is no prettifying the unflinching lyrics which often play on the language of the Church despite the fact that Hozier is “not a religious person”. He is, and always has been obsessed with blues and gospel music (his father is a blues musician too) so it’s not surprising to hear themes of religion, death, God and sacrifice creeping into his lyrics.

His musical tastes, even as a teenager all seem suspiciously credible. Screaming J Hawkins, Tom Waits… did he never buy a Boyzone album? “I’m afraid not. I was never drawn to Top 40 stuff. My head is still in the early 20th century.”

It’s not all God and death though, there’s plenty of romance and heartbreak too, like in To Be Alone, when he sings: ‘Honey when you kill the lights and kiss my yes/I feel like a person for a moment of my life/But you don’t know what hell you put me through/To have someone kiss the skin that crawls from you/To feel your weight in arms I’d never use/It’s the god that heroin prays to.’

Lyrics don’t come easy, he admits. “I pour over the lyrics for a long time.” The knack is concision. “Saying as much as you can in a few words as possible but also trying to avoid popular music’s clichés and idioms… cutting to the absolute bone.” Amen to that.

Hozier the debut album is out today (October 6)