Luka Bloom: 'A naked voice and guitar is a lovely way to perform'

BARRY MOORE, baby brother of Christy Moore, adopted the name Luka Bloom at the relatively mature age of 32 and left Ireland in search of bigger experiences.

“It was a conscious decision to try something different,” he says.

“I’d lived most of my life in Ireland – a place with a population the same as Greater Manchester. Musicians had success carving out working lives there, but, since 1986, I’ve known that I want to sing in Belgium, Switzerland, Austria, Holland, America and the UK.”

Luka Bloom – his first name taken from the Suzanne Vega song about child abuse and second name  from the character in James Joyce’s Ulysses – has been singing to audiences around the world ever since.

A poet and rocker who embraces folk, traditional, but also contemporary genres might describe him better. Heartman – one of the superior tracks on his latest album This New Morning – sums him up nicely.

Bloom’s yearning and thoughtful songs about love, exile, foreign lands and homeland are delivered from the heart in passionate live performances.

His 20th album, This New Morning, regarded by some as his best, is a beautiful collection of songs and features a red carpet of guest musicians, including Donal Lunny, Glen Hansard, Steve Cooney, Iarla Ó Lionáird, and Caoimhín Ó Raghallaigh.

It’s up there with other classics – his debut Riverside, the landmark The Acoustic Motorbike (with Bloom’s unique cover of L.L. Cool J’s I Need Love), Salty Heaven (hailed by the Irish Times as “not just a wonderful album but an album filled with wonder”), and Between The Mountain And The Moon, to name a few.

He’s just released a book of photographs, Homeplace, and big brother Christy recently recorded one of Bloom’s songs I’m a Bogman for his own album. Stealing his kid brother’s songs is something of a habit.

Previous covers include Christy’s renowned version of the hauntingly elegiac City of Chicago, one of Bloom’s finest compositions about Irish emigration to America during the 1847 famine.

Bloom’s journey began with a music-filled childhood in Newbridge, Kildare and his mother was his primary musical influence. “I learned many ballads from my mother – ‘Bold Robert Emmet’ and the like.

The first song I learned was probably My Singing Bird when I was about five. My mother was a great singer and fabulous piano player. She was the driving force behind all the creative endeavour in our family.”

A unique guitarist, he developed his trademark sound from a young age – open tunings and strong, rhythmic strumming patterns. The first time he held a guitar, aged nine, Bloom experienced “a feeling of coming home”. But it wasn’t until aged 12-14 that he really began playing, after Christy gave him his first guitar.

“My brother brought me back a guitar from England and I started playing and writing songs immediately. I was becoming aware of people like Ralph McTell, Donovan and Neil Young, and learning songs like The Streets of London” he recalls. 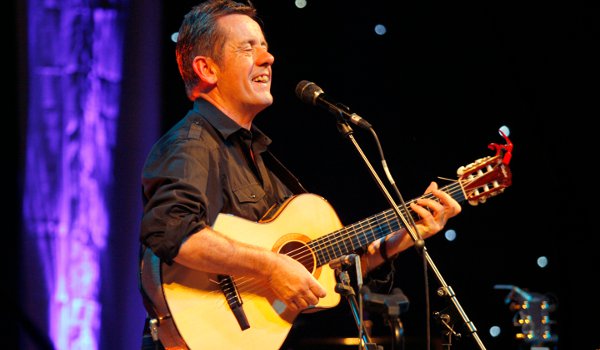 'A naked voice and guitar is a lovely way to perform'

Early 1970s singer-songwriters were a big influence. “All my generation were wild about the Beatles and Stones – but I felt like an outsider because I was listening to Ralph McTell, James Taylor, Nick Drake (later on), and Joni Mitchell, who was top. I was always blown away by her guitar style”.

One of the first songs he wrote was Wave up to the Shore, recorded by Christy in 1976 - “a heavy kind of song for a 15-year old” – which Bloom is planning to re-record now.

Another early composition was Jenny of the Sun about an autistic child. The teenage Bloom was already displaying depth and skill as a songwriter.

His first album, Treaty Stone, was recorded in 1977 by Mulligans Records (who were recording Sonny Condell and Mick Hanly), and named after a place in Limerick where Bloom studied.

“I did European studies. I spent two years trying to please my poor mother who was desperate for me to have academic pursuit and I sort of disappointed her – but she got over it!”

Twenty albums later, the pull of the music and making albums is as strong as ever. “Nothing in the downloading world comes close to me to the beauty of the album. This is the way I express myself. I love the idea of setting aside time for writing and creating a body of work and shift in life.”

He’s also still inspired. Universal themes and the simple joys and sadness of everyday life are all material for this artist.

This New Morning includes songs about the Queen’s visit to Ireland – A Seed Was Sown; the 2011 Japan earthquake; a lament about young girls’ drinking; a celebration of cycling and a tribute to great men, Heartman. “I wrote Heartman because I’d read so much about cruel and mean-spirited men in the media and wanted to write about some of the men who had been inspirational in my life.”

Social conscience and humour are found in both Bloom’s and his brother’s work – but the two interpret songs differently. Take Christy’s version of I’m a Bogman, which Bloom says is more serious than his own slightly comic original.

“Christy started talking about ‘Bogman’ a year or two ago and decided he wanted to rewrite it. He’s called it ‘Where I Come From’. I find his interpretation very deep and reflective – it introduces some aspects of life going back 40-50 years.”

When asked about the traditional flavour in his work, Bloom says he’s often asked what it means to be an Irishman and wonders whether other nationalities are asked to define themselves so.

"Everything I do or say comes from the fact I was born and raised in Ireland. But we go out into the world as human beings and individuals on earth. I grew up in a country which was colonised and had a difficult relationship with its neighbour and where there are still linguistic divisions. These all make up the person I am but I never think about that.” 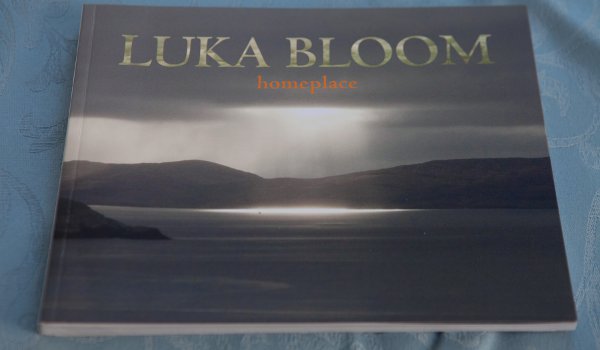 Bloom recently released 'Homeplace' - a book of photographs, poems and lyrics from the last 25 years

This Kildare man moved to County Clare a year ago, drawn by its powerful musicality. “I always loved the Cliffs of Moher and the Burren. I’ve lots of friends there and there’s a lot of laughter, fine people and interesting things going on.”

Bloom recently completed an experimental café tour in Clare. Every gig sold out. “It stemmed from jealousy of people who play music six nights a week and get to sleep in their own beds!

"My tours always start with an airport! I wanted to do that but not in pubs. There’s been an explosion of amazing cafes around Clare - none of the venues I played in existed 10 years ago. It’s a really lovely way to perform – just naked voice and guitar with no amplification, singing to 60-80 people.”

Bloom may repeat the experience next year in Kerry or even further afield – he’s keen to take it to Reykjavík. Just back from a November tour of Belgium, preceded by his appearance at the October Liverpool Irish Festival, festivals are already being lined up for next year.

But a period of hibernation beckons and a new album is in the wings. He has about 20 songs documented but needs contemplative time to decide whether to commit to it and how to record them.

“I’m already quietly preparing the room for what I think will be a year’s process of writing. It’s kind of ceremonial” he laughs.

A prolific writer, he’s reverent about performing. “When you choose to be a singer-songwriter, you have the job of writing songs, recording songs, and then going out performing them. Of course you get nice ideas for writing when you’re on tour - during a sound check, or hearing something someone says in conversation.

"But I don’t actively sit down to write when I’m on tour. My only interest is in the audience when the show begins. I don’t want to dilute that.  It’s about honouring the individual jobs.”

Anyone who has been to a Luka Bloom gig and experienced his energy and passion would agree – there’s an obvious flair for connecting with audiences, whether in a café or concert hall.  There’s some apprehension about going into writing mode.

“You feel a bit terrified if you haven’t written for a year but you’ve moved on so there’s also less risk you’ll rewrite a song you wrote two years ago. Children have been born, people have died, relationships have started or ended, and it feels like a child starting back at school”

Bloom’s newly-released Homeplace – a book of photographs, poems and lyrics from the last 25 years – is a brand new creative direction but intrinsically linked to his songs.

“It’s been a labour of love really but now that I have it, I really love it. Someone in New York just told me they keep it by their bed and it feels like a kind of meditation. I haven’t a clue what to do with it or how to sell books!”

Bloom still has plenty to say and the words and melodies to express it with. This “heartman” and his songs still matter.

For more information and to purchase Luka’s albums and book, go to www.lukabloom.com