2014 WAS A GOOD YEAR for the Irish acting/directing power couple that is CONOR LOVETT AND JUDY HEGARTY LOVETT.

Conor Lovett won the Stage Award for Acting Excellence at the Edinburgh Fringe Festival for his part in American playwright Will Eno’s one-man show Title and Deed, and the pair are looking forward to bringing the play to London this month.

Director Judy Hegarty Lovett says it took a long time to find the right piece and they are thrilled with how it’s turned out so far.

The couple’s relationship with Will Eno goes back about 15 years, explains Hegarty Lovett.

“[He] first came to see one of our Beckett shows in New York in 1998 and he sent us some of his writings… We workshopped one of his plays in 2000 and have stayed in touch. He brought Edward Albee to see our production of First Love by Samuel Beckett in New York in 2009. In 2011 he came to see The End by Samuel Beckett and he had an idea for a solo show for us. He asked us if we’d be interested and within a few months we were rehearsing Title and Deed.”

After doing some readings of the early drafts to Eno over Skype, he joined the couple for the final weeks of rehearsal and the play premiered at Kilkenny Arts Festival in 2011.

The following year it ran for six weeks in a co-production with Signature Theatre New York, where Eno is a resident playwright.

In Title and Deed Lovett plays “a nameless traveller from a far off place” searching for “connection and solace in an unknown country” in a play that deals mortality, loneliness, innocence, home, family, love, funerals, words, and the world.

Reviews of the play, which made the New York Times ‘Best Plays of 2012’ list, have been positive with the same newspaper calling it “a haunting and often fiercely funny meditation on life as a state of permanent exile” and dubbing Lovett’s performance “marvellous”. The award at Edinburgh was the icing on the cake. 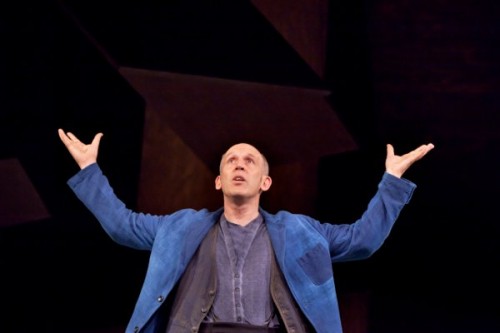 ONE MAN SHOW: Conor Lovett in Will Eno's Title and Deed

Judy Hegarty Lovett graduated from Crawford College of Art and Design in Cork, before moving to Paris. There she became the assistant director of Gare St Lazare Players Chicago.

Conor Lovett studied theatre at Scoil Stiofain Naofa in Cork before joining the same Chicago company. They married and founded Gare St Lazare Players Ireland (GSLPI) in 1996 with their production of Beckett’s Molloy.

Since then Hegarty Lovett has directed over 20 shows for Gare St Lazare Players Ireland and cumulatively her work has been seen in 150 venues worldwide including the National Theatres of Britain, Bulgaria, Israel and Romania.

Meanwhile Lovett’s CV of solo Beckett performances, which he is best known for, include First Love, The End, Malone Dies and Molloy. Film and television credits include parts in Fair City, Father Ted and Intermission alongside Cillian Murphy and Colin Farell, but it’s almost impossible to talk about either’s work in isolation.

The couple lived in London in the late nineties, where they produced Beckett’s Molloy, their first Beckett solo, and Hegarty Lovett says that put them on the path “to an exploration that led us to having someone like Will Eno write a play for us”.

Today they live near Monet’s famous garden in Giverny, Northern France with their three children. Asked what is it about life in France that appeals, Lovett simply replies “the camembert”.

The pair say they had no clear vision when they set up Gare St Lazare Players Ireland (GSLPI) other than to make good performances and get them seen by as many people as possible.

That aim they have certainly achieved. Having returned from a sold-out season in Shangai, they tour Sweden, Denmark, Greece and South Africa in 2015 and Australia and New Zealand in 2016.

Yet the connection with Ireland has always remained strong; tours always begin at home before going overseas. More impressive, as Hegarty Lovett points out, GSLPI has toured more than The Abbey and internationally they come second only to Riverdance in terms of how much touring they do.

Last year they produced the first major Irish production of Waiting for Godot since 1988, taking it from Belfast to Boston, and soon they hope, to London.

Some say Eno’s writing has echoes of Beckett, but Lovett isn’t sure if the comparison is helpful. “I never get that but I hear a lot of people say it. To me he is exploring similar territory to Beckett but so many artists are doing that… I think Will has a very distinctive voice.”

It’s hard not to notice that Lovett has a string of solo performances to his name, so what is it about one-man shows that appeals? He says while it took them some time to get a handle on Beckett, solo shows were the right approach. “It also made it very manageable and portable,” he explains, and allowed GSLPI to tour to over 80 cities in 25 countries.

Nerves, even when performing a 70-minute monologue like Title and Deed are not an issue for Lovett. “I’m a professional actor with over 20 years’ experience… acting is a job like many others and it requires preparation and rehearsal and a team of collaborators. Even in a one-man show you are never alone and you shouldn’t take the responsibility as though you were,” he says.

Beckettian actress Lisa Dwan has been known to resort to some unconventional methods to memorise her lines (such as strapping herself blindfolded to the banisters of a staircase to rehearse Not I or reciting her lines aloud in the middle of Hampstead Heath) but Lovett hasn’t resorted to similar tactics.

“I repeat them until I don’t have to think about them. It takes a long time and it’s very monotonous but once you’ve done it, you can then play with the text with more freedom.”

Asked if he believes Beckett can be tough to watch, Lovett has a strong defence.

“Beckett pushed the form of the novel and the play in the same way as someone like Picasso pushed painting — breaking new ground and inspiring many great artists after him. But it’s important to see his drama in the context of his life’s work and to understand that you’re dealing with one of the rare maverick artists that comes along and can’t be seen against his contemporaries.”

However, if Beckett isn’t your cup of tea, there’s no need to beat yourself up, he says. “He’s writing about the experience of being aware that we’re living without certainties. A lot of people aren’t interested in that and a lot of people are. The latter don’t find his work tough.”

Practically, the biggest challenge they face running GSLPI is to keep making work that inspires them and their audience.

Lovett describes their position at “the artistic end of a form of entertainment that is trying to find its essence, its vital elements”. In order to stay alive, they try to “embrace the elements of theatre that TV and cinema can’t replicate. The liveness and the exchange of energy between actors and audience.”

Both Hegarty Lovett and Lovett are excited to kick start the 2015 in the “great theatre capital” of London and later they will tour Europe and the States with Waiting for Godot.

This year will also see Hegarty Lovett undertake a PhD on Beckett and they will begin work on a new piece of Beckett’s prose, so there is sign of a slow down for the couple taking Irish theatre around the world.