EVANNA LYNCH is keeping me waiting. Upstairs in a busy office in Soho, the Irish star of the Harry Potter movies is busily chatting away on speakerphone as throngs of Londoners scurry below us on Berwick Street.

As the minutes tick by, Peter Snee, the director of Lynch’s upcoming play, Houdini, is explaining how difficult it has been to cast the new production, a darkly comic look on the lives of the world-famous performance and stunt magician brothers.

Apparently, casting an actor to play the lead role of Harry Houdini, who can both deliver a line and hold his breath under water for four minutes — not to mention the implied insurance tangle — is proving to be a challenge for the theatre veteran.

Half an hour passes before I’m ushered into a room to meet Lynch, not sure what to expect after this slightly diva-ish delay.

After all, this is a global movie star who was handpicked from 15,000 hopefuls to play Luna Lovegood in four Harry Potter films from 2006.

Then at the world premiere of the final film in the series — Harry Potter and the Deathly Hallows Part 2 — in 2011, JK Rowling, who had described Lynch as the “perfect” choice to play Luna, praised the young Irish actress as one of the ‘big’ seven members involved in making the film series such as success, placing her alongside names such as Emma Watson and Daniel Radcliffe.

Back then Lynch was also a secondary school student living at home in Termonfeckin, Co. Louth. Two years on and she has swapped Louth for her new adopted home of Los Angeles, playground of spoilt movie stars and C-List rich kids.

However, any imagined prejudices I had about her being some kind of stroppy celeb are cast aside soon after she sits down for our interview. And it’s to prove an interview of surprises.

Close up, Lynch is of a diminutive stature. As she sits, she seems to sink low in her armchair. Wearing a plain white top and blue jeans, her phone buzzes throughout our chat but remains rested on the chair. Remove half a million Twitter followers, and this could be any normal pretty, blonde 21-year-old [she turns 22 next month].

Inconversation she also proves to be a bright, intelligent and refreshingly down-to-earth interviewee. As we meet, she is deep into rehearsals for Houdini.

She plays Bess Houdini, Harry’s wife and stage assistant in the show, written by and co-starring BAFTA-winning actor and filmmaker Stuart Brennan.

So how did Lynch end up here, in another magic role? “I was friends with Stuart, and he’s one of these people who’s always working on 10 things [at the same time] and he’d always be sending me script readings, and I’d say, ‘Great, OK, let me know when it’s going,’” she says, rolling her silvery-blue eyes in mock expectation.

In contrast to her cool and collected Luna Lovegood character, Lynch talks in an excitable, scattergun style — another surprise.

“I didn’t think it would ever come to anything, because he’d sent me a couple of film scripts and I got really excited about them and then it was like…” she pauses, making a magician’s puff movement with her hands. 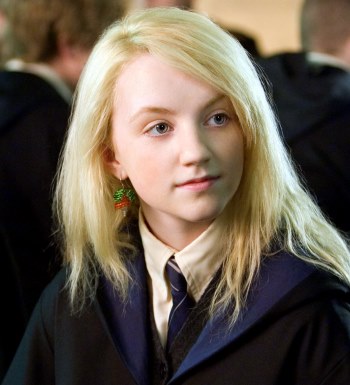 “Then he sent me this, and I really liked the script. It was so sharp and funny and really interesting and so I went on tape and he sent it to Peter and, yeah, they liked it and they… cast me.”

In what is your first stage role? “Yeah,” she says excitedly. “I played St Francis of Assisi when I was like 10,” she blurts with a giggle.

Does Bess’ role carry an element of danger, I ask, given what Snee has just told me about the breath-holding feats involved with Harry’s character.

“I don’t think so. Mine is a vanishing act, so there’s no one sawing me in half or anything,” she says, laughing.

So no apprehensions about the role then? “I guess I’m apprehensive about the casting of Harry (Jamie Nichols has since been cast in the role) because they [he and Bess] have such a unique relationship. They were inseparable,” says Evanna.

“I think it’s important like, obviously, not that I fall in love with this person, but just to feel [something]. Yeah. So I hope that goes welland I guess I’m nervous of going on tour,” she adds of the play set to tour across Britain from September, before finishing with a set of dates at the Gaiety Theatre in Dublin in October.

What are your thoughts about the first night of the first live show, I ask. “Oh my gosh, yeah. I don’t know,” says Evanna. “I am nervous about that, but hopefully all the rehearsal will help ease those nerves because yesterday, for the auditions, I was watching auditions all day and then I had to get up and I WAS SO NERVOUS. I was freaking out. So I hope I can overcome thatand it won’t get in the way.”

Her phone, on cue, starts buzzing again which helps to break any thoughts of stage-fright. Evanna says she is relishing the challenges offered by the new form though.

“I’ve always wanted to do stage. Always,” affirms Evanna, who counts Brian Friel and Sean O’Casey among her theatrical influences.

She credits her parents — schoolteachers from home in Co. Louth — as helping to get her get hooked on plays from an early age. “We’d always go to the Abbey (The National Theatre of Ireland) and to the Gate (also in Dublin) and [although] my parents are not really film buffs, they are very into literatureand they would always have us reading plays.

“They see [theatre] as the pinnacle of acting. Where you’re just one person on the stage and you have to captivate the audience.

“I don’t even know if they have that much respect forfilm,” she adds with a laugh.

The excitement of live performance clearly appeals to Lynch. She says: “It’s a lot of responsibility in that you can’t change it, it’s not been edited to make you look good. It’s just you. It’s very pure, it’s raw.”

Maintaining a keen and inquisitive attitude towards her profession, I wonder if the real challenge of putting Houdini on tostage will be to disregard the bells and whistles of the magic tricks (because let’s face it they’ve been done before) in favour of weaving an original narrative from the Houdinis’ life stories? Lynch nods in agreement.

“That’s what attracted me to the script so much,” she says. “It’s the elements they combine, there’s amazing story, the drama, the tension between the brothers and Houdini’s wife. Plus, they’re doing all of the illusions, you know, they have some vanishing acts so it’s gonna be so visual but also a story.”

It was the story — and particularly the feisty, strong-willed character that is Bess — that attracted Lynch to the role in the first place. “He [Harry] called her his lucky charm and I think it’s so interesting to explore the minds of these people who were in the background, who were supporting these people who become our idols,” she says. 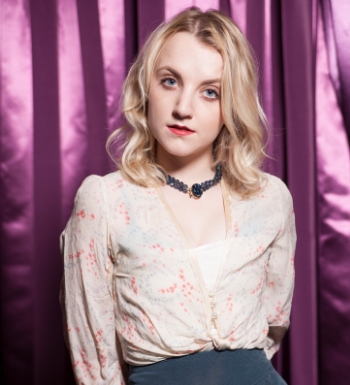 Since the final Harry Potter film was released two years ago, Lynch has, like many of her Potter contemporaries, looked to expand her repertoire as an actress, rather than milking off the success of the blockbuster franchise.

She has worked on a variety of film and television roles, most recently in G.B.F. [Gay Best Friend], a US high-school teen comedy where she played a homophobic evangelical Christian.

“I had to kind of become a character who I disagreed with in every way,” she says of the part, “and I felt disgusted by some of the things she was saying, but I had to play her not as a caricature, [but] as someone who was 3D. I had to empathise with her.”

Did you choose that role because you felt a need to break from type?

“Yes. I wanted to try something different. It was a chance to do an American accent [too]. And it was a very different genre. I’d never done comedy before.”

Last year, she also took on a darker role in indie drama short Apex, while she credits working with Irish actress Orla Brady during a guest role at the Sky One drama Sinbad, as a huge learning experience. The pair would spend a few hours each evening in their hotel rooms hanging out and talking and inventing stories between their characters, Evanna says.

Then there’s Monster Butler, a Malcolm McDowell starring film based on Archibald Hall, the British serial killer and thief. However, a scheduling conflict put paid to production plans for a release this year. That’s the nature offilm industry, Lynch shrugs, but she’s still hopeful the film will come out.

How have you found the transition from screen to stage, I ask. “Well, first of all, you’ve so much preparation time, which I enjoy. Forfilm, you have a few weeks to prepareand you also don’t get any rehearsal time. Whereas this gives us a chance, especially with acting real people who had existed before, who had who lived 20 years before this will be experienced.

“It would almost be an injustice to them not to explore, not to give a lot of time and a few intense weeks of thought and exploration to discover their characters.”

She feels the experience gained as a teen actress has put her in good stead to face the world as an actress, without having been through formal drama training. “There are directors, like I remember David Yates [Harry Potter director], I’d ask him, ‘Should I be training?’” she says. “And he’d answer, ‘I want you to keep your sense of wonder and freshness and to not walk in a room and feel like you know everything.’”

Though Lynch concedes there would have been some benefits to formal training. “I still struggle with nerves at auditions,” she admits. “And I do think if I’d gone to drama school I’d have been better acquainted with that.”

As well as film and TV roles, she has recorded an audiobook, Foster, written by Irish author Claire Keegan. Having dropped literary allusions throughout the interview, I ask if writing is an avenue she wishes to explore.

As quick as a flash, she answers: “Yes, I’d love to. Actually I’m doing a few short courses at UCLA [a Californian University].

“I did a screenwriting course, which was fun. I feel that goes hand-in-hand with writing, you know, having to explore characters and invent backstory because that’s what we have to do. When you get an audition and the character might be crap, they might be so flat, and you have to go and do all that work — and it’s the same with writing.”

As for the future, she said she still harbours ambitions of going to university one day. But career-wise, the stage is set for more live acting roles.

“Luna got me a profile and got me noticed,” she affirms. “But her character was very… because she’s so calm and so zen that there was never a big outburst where you have to, like, cry,” she adds, laughing again.

“And I would also love to play, like, a mental patient or something, play someone crazy.

“I just think the most important thing to me now is that I’m still doing things I’m passionate about.”

QUIZ: Can you get 100% in this quiz about Irish actors?