AMONG the clanging of coffee cups and city chatter in a discreetly marked members’ club on Shaftesbury Avenue, sits the Queen of Ireland.

Wearing a snug navy wool jumper and jeans, in person Rory O’Neill looks, dare I say, conservative. But thankfully what comes out of his mouth is anything but.

His voice (amplified when he’s dressed to thrill as Panti) is so distinctive, sounding more a mix of posh Dublin than his backwater birthplace of Ballinrobe, Co. Mayo with an added dash of Jerry Hall southern drag queen drawl. 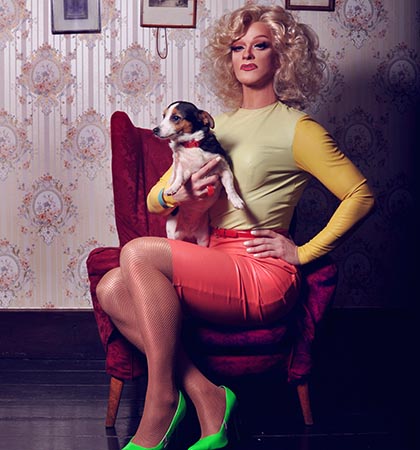 O’Neill is in London to talk about The Queen of Ireland. Six years ago, a close friend of his — fashion photographer turned filmmaker Conor Horgan, approached him about making a documentary.

It wasn’t the first time he’d been approached, O’Neill explains.

“I’d been asked lots of time before… You know it’s kind of an obvious choice — a student film about a drag queen — but I’d always said no. I thought it would be a bit cringey someone following me around with a camera. I’m very Irish that way — I would never say yes to a stranger.”

Horgan and O’Neill had a 20-year friendship behind them, so this time he said yes. Little did Horgan know that a few years into the Panti project — his subject, a big fish in the small pond of the Dublin LGBT scene was about to become a national treasure and an international gay rights icon.

The resulting movie follows O’Neill through the most eventful period in his life, a life that even before Pantigate had been anything but pedestrian.

For anyone out of the loop — here’s a brief history of Pantigate. But first take a deep breath, and promise that not to sue.

In January 2015, O’Neill made an appearance on RTÉ’s light entertainment programme The Saturday Night Show, hosted by Sunday Independent journalist Brendan O’Connor. During the interview, O’Neill mentioned the well-known Irish newspaper columnist John Waters and the Iona Institute (vocal commentators on the ‘Vote No’ side of the same-sex marriage debate), in a discussion about being gay in Ireland and homophobia. In short, both parties were pretty unhappy with what O’Neill said and wanted redress.

Waters has since pointed out since that while he is not against gay marriage in principle, he opposed the same-sex referendum because he believed it would undermine the rights of biological parents.

After the show aired, solicitors acting for Waters and the Iona Institute threatened RTÉ with legal action. RTÉ redacted O’Neill’s comments from it’s online player, publicly apologised and paid out €85,000 in damages to the complainants.

To say this provoked a heated national debate, not just about the issue of same-sex marriage, but about homophobia, bullying, freedom of speech and the role of the state broadcaster is the understatement of the century. And that was Pantigate.

A few weeks later in February, Panti stood on stage after a performance at the Abbey Theatre and delivered an eye-opening short, personal and very moving speech about homophobia (no mention of Iona or Waters this time). It was filmed, posted online and viewed 769,988 times. 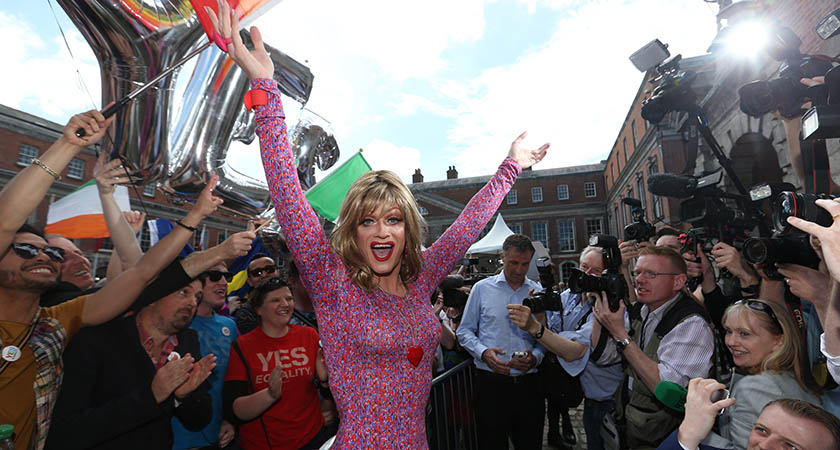 What followed was a rather starry outpouring of support. To give you a flavour, on February 5, O’Neill tweeted: “Yoghurt for breakfast. Wrote some emails. Message from Madonna about my speech. Walked the dog. WAIT WHAT?”

So now you know why filmmaker Horgan, who was there to capture it all, has been grinning “like a Cheshire Cat” ever since the extraordinary set of events unfolded.

“It’s odd” says O’Neill reflecting on Pantigate and the referendum of May 2015, “that at home, I became this big symbol for marriage and that Panti has become so mainstream or establishment almost, because what attracted me first to drag was that it was underground and transgressive and discombobulating.”

“I’ve never been the marrying kind,” he continues getting more animated, more Panti-ish. “Maybe if I fell madly in love with someone tomorrow I might change my mind but that’s never been a driving thing for me.” 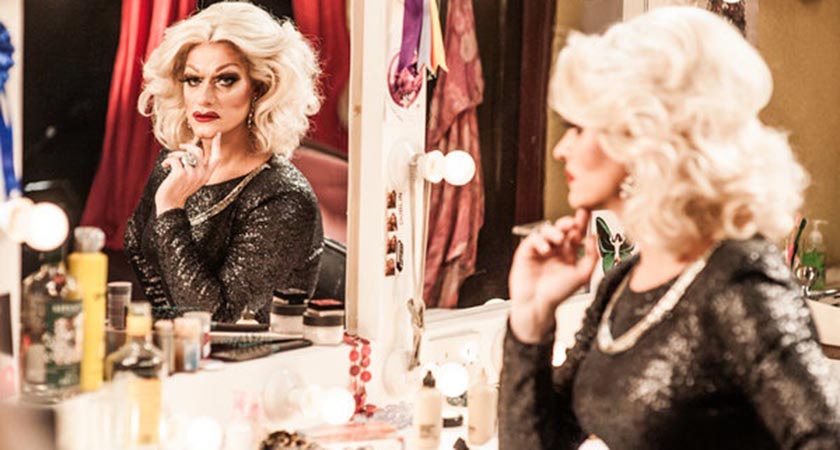 Along with all the recent drama, the film also reveals some of Panti’s past, including some heady, hedonistic and wild times in London. Is he still a fan of the big city? “I think London is one of the most amazing places in the world to visit but I always feel sorry for you poor bastards who have to live here because everybody works so hard and you’re all spending so much money on your apartments and you have to travel so far and all that stuff.”

It’s also a far cry from the London he knew when he was younger.

“Ireland was pretty grey and dull and oppressive at the time and I wanted to be a big gay”, he says about his decision to emigrate. “One of the things I loved [in London] back then was that to find the bloody gay scene you had to work hard at it and to throw yourself in you were almost rejecting everything else.”

He found the subculture exciting and thrilling. “Gays were able to make up their own rules about how to live and be happy and form relationships. The gays were starting from scratch”. O’Neill takes a rare pause before racing on with his thought. “For me now, there’s this tension because as becoming gay becomes accepted it has its edges rubbed off it.”

It was in London (at a party his brother threw) that O’Neill met legendary club kid Leigh Bowery.

“I was like ‘wow he’s from a shithole in the middle of nowhere in Australia and just through his own creativity has transformed himself into this creature of amazingness’. That blew my mind. Because up until that moment I thought I was always going to be defined by where I came from.”

And it was London where Panti was born and O’Neill’s stellar drag career began.

So apart from the movie, the sky-high profile and the celebrity pals, what’s changed from his salad days in drag? “People take everything I say so f***ing seriously now,” he drawls. “It’s a weird thing that people take what a drag queen says so seriously.”

O’Neill is naturally funny. He doesn’t want to be statesmanlike and (despite a few rumours) he’s not running for President of Ireland and has no interest in the dull world of politics (although he has been approached to join the Irish Senate). “I would make a terrible politician”, he protests. “I’m not good with photocopiers and boardrooms and compromise — all the boring parts.” 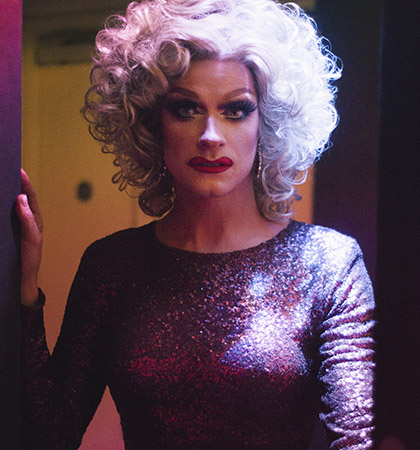 What about if he were put in charge of running Ireland for a few weeks, what would President Panti do?

“I’d repeal the 8th”, he says without missing a beat. (The 8th being shorthand for the controversial constitutional ban on abortion in Ireland).  And, he carries on: “I’d designate Travellers as a distinct ethnic group.” And, he concludes defiantly, “If I was a dictator I’d insist all men do drag at least once.”

In terms of his career and opening doors, the fame has certainly made life easier, but O’Neill takes it all in his stride while wearing 6inch stilettos.

He’s seen drag go through swings in popularity before (like in the ’90s when RuPaul made it popular again) and he’s quick to point out that all of this didn’t happen when he was in his 20s. In five years time, who knows, he says, everyone might be bored of drag.

O’Neill is mid-forties and so far, being Panti has always paid the bills. He’s never been rich, but then he’s not a big spender either.

“I don’t drive a car, it’s not like I want to buy a super expensive suit. The only things I spend my money on are wigs and make-up, I’m like any girl.”

It doesn’t seem right to ask someone so hyperactive, so vivacious and so revved up and ready to go about slowing down, but I want to know if O’Neill will still be doing drag in his 90s? Will Panti ever hang the wig up and retire? He lets out a wildly dramatic roar and fakes beating his head against a pillow in frustration. “Ahhhh! I’ve been asking myself since I was 22. I never thought it [drag] was a career. I thought I’ll never be doing this in five years”, he says before launching into another ferociously funny and fiery conversation at full speed. So there’s your answer.