SINGER Glen Hansard has given a rousing performance of a song close to his heart to raise awareness of the 6,700 people who are homeless in Ireland today.

The Oscar-winning performer paid a special visit to Focus Ireland’s coffee shop in Dublin's Temple Bar where he heard some of the human stories behind the homeless crisis.

The singer also teamed up with the High Hopes Choir to perform the song Hey Day by the late Mic Christopher - the singer who was a close friend of Hansard's.

Scroll down to watch the Hey Day video below...

The High Hopes choir is made up mostly by people who were formerly homeless but now have their own home due to the work of Focus Ireland and other agencies.

“ It’s great to meet people who have overcome homelessness and now have a place to call home. It’s important to always remember that homelessness is a stage in someone’s life and not a destination,” Hansard said.

“That’s why we wanted to sing Hey Day by my friend Mic as it’s a song about hope.

"It’s a beautiful song that asks why can’t each day be better or at least as good as the day before….that there doesn’t have to be one time in somebody’s life that is great and then it’s downhill. 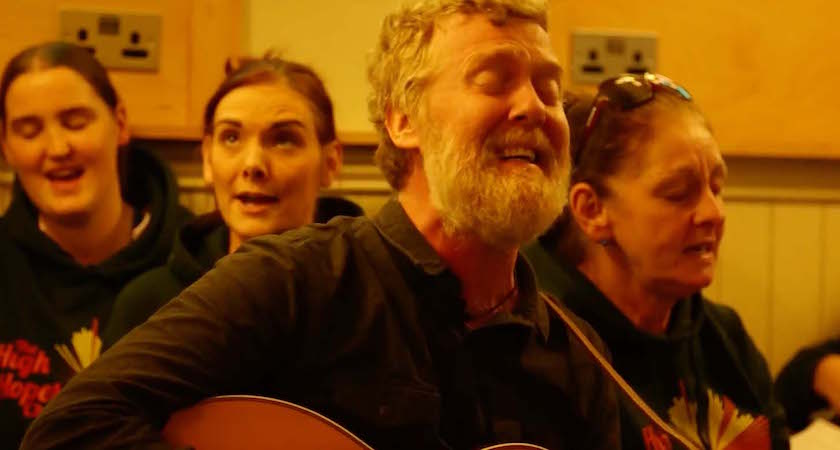 "People who are going through tough times need something or someone to give them hope. To show them there will be some light ahead when they can leave the bad times behind.”

The singer’s visit comes as latest figures show a record total of more than 6,700 people homeless in Ireland - including 1,173 families and 2426 children.

According to focus Ireland more than 1,000 of these families are in Dublin.

The charity's CEO Ashley Balbirnie said: “Many of us are starting to think about Christmas when we can spend more time with family and friends and enjoy this special time of year at home.

"We all recognise that there is something deeply wrong with our society when nearly 7,000 people don’t have a place they can call home this Christmas. We are not just talking about numbers and statistics here.

"There’s a human face and a human story behind each statistic. Behind every figure is a real person…..a father, a mother, a daughter or son, …each of them suffering the ongoing trauma of being homeless and is hoping to find a better future.”

Focus Ireland relies on public donations to help fund 70 lifeline services that support over 12,500 people each year who are homeless or at risk of losing their homes.

Focus Ireland repeated is support for the Government strategy on homelessness but stressed that the crisis will only be brought under control when effective action is taken to reduce the number of families – and single people – becoming homeless every month.