THE GREAT Jim McCann, one of Ireland’s best loved and most respected folk singers, sadly lost his brave battle with throat cancer earlier this month.

McCann was born and raised in Dublin and although we both attended Terenure College I only got to know him later when he started performing around the thriving Dublin folk scene as a solo artist playing a lovely Gibson guitar that was the envy of every aspiring folk singer.

He had started to study medicine at UCD but was lured into folk music while working in Birmingham on a summer job. When he returned home he joined The Ludlow Trio who had a No.1 hit single in March/April 1966 with The Sea Around Us — a song written by Dominic Behan.

To put that achievement into perspective it’s interesting to note that the singles chart No.1 spots for 1966 up to that point were nothing if not eclectic. The Beatles, Larry Cunningham, Doc Carroll & The Royal Blues, Nancy Sinatra and Dickie Rock all held the top slot before The Ludlows.

When The Ludlows broke up a year later Jim embarked on a solo career and released his first single Some Day Soon — a great song written by Canadian folk singer Ian Tyson that Jim loved and continued to perform throughout his long career.

He became great friends with Luke Kelly when they both appeared in Jesus Christ Superstar and there is a wonderful clip on YouTube of Luke performing Phil Coulter’s brilliant song Scorn not his Simplicity on Jim’s TV series The McCann Man — the only televised version that Kelly did because he only performed the song on special occasions.

Jim also recorded TV specials such as My Ireland and McCann and McTell. He became great friends with singer/songwriter Ralph McTell who speaks warmly of his long association with the Dublin man. 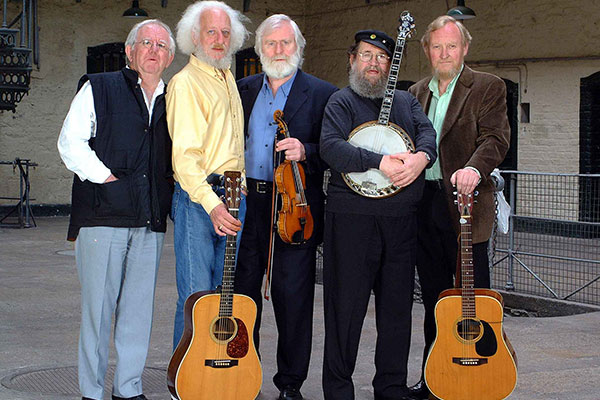 It was Luke Kelly who invited Jim to join The Dubliners in 1974 when Ciaran Burke became ill.

In fact McCann ended up touring and recording with The Dubliners for five years.

A real gentleman, a lovely warm person and a great story-teller with a terrific sense of fun, Jim did a great impression of Barney McKenna and has written a book about Barney’s special way with words which John Sheahan says is due for publication in the autumn.

John recalls an example of Jim’s spontaneous wit when the host on a live TV show in Australia asked the singer “How did you find Australia Jim?” and Jim replied “I had a map”.

Jim left The Dubliners in 1979 to resume his solo career and had several hit singles including the beautiful song Grace, (which you can listen to below) written by Sean and Frank O’Meara.

Grace (Gifford) was briefly the wife of Joseph Mary Plunkett, the youngest signatory of the 1916 Proclamation. They were married on May 4 in Kilmainham Jail just a few hours before he was executed.

Jim’s recording of the song stayed in the Irish charts for 36 weeks and will forever be associated with him as the definitive version. With the centenary commemoration due next year no doubt the song is bound to get a lot of renewed airplay.

Jim and Ronnie Drew rejoined The Dubliners in 2002 as part of their 40th anniversary celebrations but later that year he was diagnosed with throat cancer. While treatment proved successful it left him unable to sing, although he did play guitar with them again in a concert in 2012 as they celebrated their 50th anniversary.

Ever resourceful, Jim turned his attention to his photography and graphic design and retained his connection with the music business and The Dubliners until finally losing his battle with his illness.

Thankfully there are quite a few videos of Jim McCann on YouTube to remind us of just what a beautiful voice he had.

An immensely popular figure with both the public and fellow musicians it would be nice to imagine him reunited with ex-Dubliners Luke Kelly, Ronnie Drew, Barney McKenna, Ciaran Bourke and Bob Lynch all having the craic in a mighty session. RIP Jim — one of the best.