Review: Dreaming of Kate at The Epstein Theatre, Liverpool

The mention of a tribute show is enough to immediately chill the blood.

It's a more credible offering than your typical 'tribute show' and in truth the presentation feels closer to a piece of theatre particularly during the likes of early classics such as Babooshka.

The movement, dance and conceptual element strongly references The Tour of Life from 1979 as well as various iconic promo videos and television performances.

The physical aspect of Breijman's routine is astonishing; the levels of fitness and preparation needed perhaps gives some idea of why Bush never toured for 35 years.

It takes many notable talents, costume changes and an uncanny likeness to pull this off. Due to Kate Bush's long absence from the live circuit there remains a certain amount of mystery about the artist-particularly her late 70s/early 80s back catalogue and this is something the show absorbs with aplomb.

Dreaming of Kate is an enchanting experience from start to finish for both the casual observer and the clued-up fan. 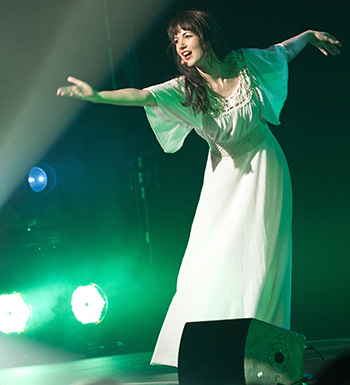 Many of the tracks tonight haven't previously featured in either of Bush's tour sets, a case-in-point is the show-stealing "Breathing" performed in a massive foetus.

Elsewhere the first half evokes the eccentric and gothic feel conveyed in the likes of Hammer Horror, The Wedding List and a particularly manic delivery of Violin.

Post interval we are offered something of a greatest hits package: This Woman's Work is a chance to regain breath and composure, a special one-off performance of Don't Give Up (with Brian Cummins convincingly taking on Peter Gabriel's vocal) reminded us of one of the greatest duets of the ballad heavy 1980s.

It's unfeasible to think of another female artist in the Irish diaspora as groundbreaking, vital and popular as Kate Bush.

Performances of signature numbers such as Running Up That Hill and Wuthering Heights underlined the point while emphasising how the visual aspect of Bush's mediated performances have made permanent ripples on the cultural landscape.

The Big Sky provided a hearty finish bringing the audience to their feet and the standing ovation was richly deserved.

This is a stylish, stunning production and until Kate Bush decides to perform live again Dreaming of Kate is a worthy carrier of her torch.

Dreaming of Kate will be touring theatres in England from May to November.