Ronan Keating on his debut West End role in Once, leaving Ireland and life in Oz

Now, at the ripe old age of 37, Ronan Keating is about to embark on a brand new phase of his career by ticking another box: acting.

Keating’s upcoming four-month role in the West End production of Once, the hit musical based on John Carney’s hugely successful 2007 film, will see him simultaneously tread the boards and flex his vocal muscles in the male lead role of Guy.

“I’ve always wanted to act, and I’ve been trying for 15 years to get into film — but trying to find someone to believe in me and champion me in that field was very hard. I guess I didn’t do myself any favours by not being very good at it in the beginning,” he chuckles down the phone line from sunny Sydney, Australia.

“I guess after going to learn and understand more about it, I got better; and that’s when people did start to believe in me. Also, as you get older I think you get more comfortable in your own skin — and that’s very important as an actor.”

Born in Dublin in 1977, Keating grew up the youngest of five children in the town of Swords, north Dublin.

His dad Gerry drove a lorry for a living, while mum Marie (whom he would later found the Marie Keating Foundation for after her death from breast cancer in 1998) owned a hair salon in Dunshaughlin, Co. Meath.

Music wasn’t a particular priority for the young Ronan: instead, he showed promise in athletics and at 15, spent time working in Korky’s shoe shop on Henry Street in Dublin.

At 16, however, fame and fortune came knocking when he answered an ad placed in the Evening Herald by one L. Walsh, who was looking to form “Ireland’s answer to Take That”.

He turned up to the audition, sang Cat Stevens’ Father and Son; 25million album sales later, the rest, as they say, is history.

“It was such a long time ago, we were only babies, making it up as we went along,” he recalls of the band’s early days.

“We didn’t really have much direction, and it was crazy to think that it actually worked. I had no idea how crazy it was back then. But we made the most of it, and we had an amazing time; the first six years were outrageous.”

The band split in 2000 before reuniting for a second bite of the cherry in 2007.

The death of Stephen Gately — who is commemorated via a Superman logo tattoo on Keating’s right arm — in 2009 was unexpected, but he and bandmates Keith Duffy, Shane Lynch and Mikey Graham continue as a four-piece to this day.

“When we got back together later on, it was even better again: we got to enjoy it more because we were adults, we got to live it differently,” he explains.

“Losing Stephen was devastating, and that changed the dynamic of the band. But y’know, we’re back again and we’ve got a new album coming out, and we’ll just continue on.

It seems like Boyzone are a bit of a forever band: we just keep doing it in whatever shape or form that we can. We enjoy being together and being around each other, and we find ways to make it work.”

‘Making it work’ has become something of a theme in Keating’s increasingly hectic life.

The past few years have been spent living in Sydney, where he has been a judge and mentor on X Factor Australia since 2010, an experience he describes as “a lot of fun” — particularly since his act Marlisa Punzalan was recently crowned winner of the show’s 2014 series.

But the relocation has proven life-changing in more than one respect; for starters, it’s where he met partner Storm Uechtritz after his marriage to Yvonne Connolly ended in 2011.

“I had a great relationship with Australia generally; I came over here a lot over the years, doing album promotion and touring and so on,” he says.

“So they knew who I was. When Simon [Cowell] asked me to come out and do the panel on the show here, I thought ‘Yeah, deffo – I’m in.’ And I love this country: the food, the wine, the people… and honestly, I love being here.

I always find it hard to leave. And obviously, what kept me here were the relationships that I built. Storm and myself became an item, and I enjoyed coming back.”

Growing up, Keating says that he always assumed that he would be one of the thousands of emigrants to leave Ireland, like his siblings who had gone before him to New York to find work.

“When I was younger, I thought ‘Yeah, this is probably what will happen to me’,” he agrees.

“But then I joined Boyzone, and I travelled so much that I may as well have emigrated because I was always on the road. So I didn’t feel then that I needed to buy a house in New York and settle down on my own.

I guess I had done my own emigrating by being in Boyzone and travelling like I did.”

His time in the band has taken him around the world in multiple guises several times, so there is a certain irony in him returning to the northern hemisphere to take up the role of a musical Irishman in Once. 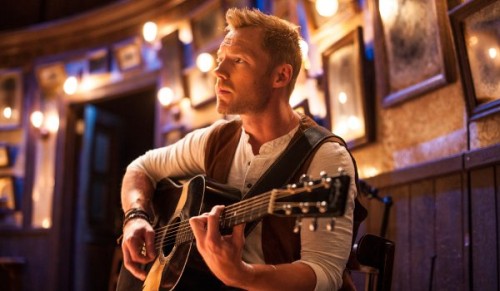 He will be the first native to play the role in its stage adaptation, which has played on and off-Broadway, in Toronto, Seoul and Melbourne before its West End run began last year: “at least I don’t have to work on the accent,” he says, chuckling.

He had been offered theatre work in the past, but nothing particularly jumped out at him — never mind anything musical-related.

“I never intended on doing West End in any way,” he admits.

“Stephen did a lot of it: he did Chitty Chitty Bang Bang and Joseph and the Amazing Technicolour Dreamcoat, and they were both amazing, brilliant shows — but I never thought I’d do them. But when I saw the film Once, I loved the movie, I loved Glen [Hansard] as a musician, loved their songs, I’d seen the show a few times and fell in love with it.

[So when] an offer came in via my agent from [producer] Barbara Broccoli to do it, I thought ‘Y’know what? If I’m ever gonna do something like this, this is the show that I wanna be in.’”

He admits that making the transition from pop heartthrob to theatre star is “incredibly intimidating and scary”, but is made “100 per cent easier” because of the show’s musical aspect.

Still, Keating is not concerned about the other transition — from the cheesy pop world to the more credible ‘indie’ one portrayed by erstwhile Frames frontman Hansard.

“I met Glen a few times, I know him well and he’s a legend, he’s brilliant; I really respect him as a musician and as a writer,” he enthuses.

“We spoke about the show before I did it and then again after I accepted the role, and he was very excited to hear that I was doing it. There are little things like the timings of certain songs, but I’ll get there.

I’m playing guitar two or three hours a day, and I’m better than I’ve ever been and I’m excited about it. But I’ve never thought about it like that — that I’m in a pop world and he’s in an indie world.

If anything, that’s the exciting part — to be able to dip out of what I do and do that side of it.”

After over 20 years in the business — the spotlight firmly shone on both his public and private life — Keating has come to a number of realisations about ‘proving yourself’.

He has not spent time dwelling on the uniquely Irish trait of begrudgery, nor trying to please anyone.

“I definitely do feel there is a sense of that in Irish people, because it’s tough for people to be successful,” he admits, before correcting himself.

“No, it’s not tough for people to be successful — but once people get success in Ireland, it’s hard to maintain it and keep it going, and also stay respected in the eyes of the press and so on in Ireland. So I understand it. I don’t mind it: I’ve learned a lot about it over the years, and I’ve learned to deal with it.”

He says that stepping away from Ireland over the last few years has helped him to view it differently; perhaps that’s one of the reasons that he plans to move back to Dublin next year with Uechtritz, in order to be closer to his children Jack (14), Missy (13) and Ali (8).

“I’m older and hopefully wiser these days,” he says, “so I hope that I’ll feel different about it.”

‘Forever band’ Boyzone is still a going concern with a new Motown-themed album out this month, while his role as Guy will keep him in London until March.

After that, who knows what surprising doors it may open for him.

“It’s always been the same thing with me: finish something and wait for the next thing,” he says of his future prospects.

“I’ve just signed a new three-album [solo] deal, so I’m going to write a solo album while working on Once, that’ll be the next thing. After that, we’ll see what happens. I’m at a stage of my life where I’m open to anything, really.”

Ronan Keating joins the cast of Once at the Phoenix Theatre from November 17th for 16 weeks.

Theatre Review: Once, The Musical