YOU have probably never heard of James Gralton.

Active during the start of the last century, the Leitrim socialist does not occupy the same space in the collective conscience as Larkin, de Valera, Pearse or Connolly. Nonetheless, his is an inauspicious place in the echelon of Irish history.

In 1933, Jimmy Gralton, as he was known locally, became the only Irish citizen ever to have been deported from the country when he was forcefully removed and put on a boat to America. He would never set foot in his native land again.

Such severe punishment for his ‘crimes’ seems improbable 81 years on. A dissident voice, Gralton was victimised by the political and religious establishment after daring to establish a dance hall in rural Ireland. A self-educated, community-serving man, Gralton’s hall was built to serve as a venue for the local people of Leitrim.

Community dances, singing lessons, poetry appreciation sessions, boxing classes, and debates about workers’ rights were held there. It sounds innocuous. But for the Catholic Church and the Irish ruling class, the hall and the man who built it represented something dangerous and subversive — the fact that the people were beginning to think and act for themselves.

Gralton’s story is the subject of a new movie from renowned British director Ken Loach and his regular, like-minded collaborator, screenwriter Paul Laverty. Entitled Jimmy’s Hall, the feature was released on Friday, May 30.

Both Loach and Laverty are no strangers to Irish history of the early 20th century having made the Palme d’Or-winning film The Wind That Shakes The Barley in 2006. That film was set during the 1919-22 war of independence and the subsequent civil conflict. The 1930s-set Jimmy’s Hall covers similar territory, but Loach has said that the approach was different.

“The two films do sit side by side,” he said. “We thought it would be interesting to see what happened to the dreams of independence, 10 years later. And as what often happens, the hopes people had aren’t realised — because of splits, and the old imperial power still trying to rule… The Wind That Shakes the Barley was a big epic film; Jimmy’s Hall is just a microcosm.”

Born at Effernagh, near Gowel, in Leitrim on April 17, 1886, James Gralton grew up the son of a poor farmer. He was encouraged to read by his mother, who operated a mobile library, but left school at 14. Like so many other Irish before and after him, Gralton emigrated to Britain at the turn of the 20th century and joined the British Army. 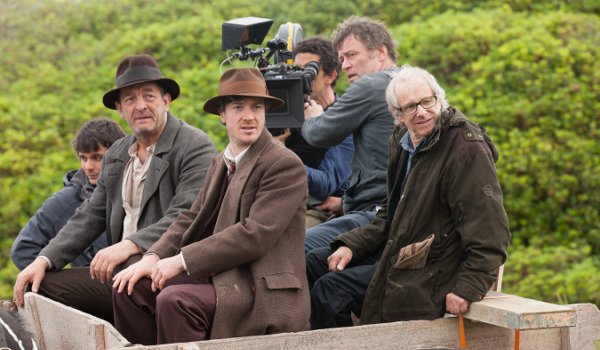 He later deserted after refusing to serve in India in protest over British polices in Ireland. For a time he worked the hard life on the Liverpool docks and Welsh coalfields before becoming a ship’s stoker. The job led him to New York in 1909.

In the US he worked a variety of jobs and — appalled at the slave-like conditions that workers endured — he became a socialist and heavily involved in trade union activity. In New York, he founded the James Connolly Club in the wake of the 1916 Rising after studying Connolly’s writings. Despite gaining US citizenship, Gralton’s heart remained in Ireland.

Almost a decade and a half after arriving in the US, he decided to return home in June 1921 and arrived back in Leitrim to find that that the Black and Tans had burnt the local Temperance Hall to the ground during the war of independence.

Gralton promised he would replace it and set about building a new hall on his father’s land near Effernagh crossroads. The large Pearse-Connolly Hall opened on New Year’s Eve 1921 in honour of the socialist and republican leaders of 1916.

As well as community dances and classes, Gralton based his Direct Action Committee there, which helped tenant farmers regain lands from which they had been evicted. Gralton would drive cattle on to the property of large estate-owners and former tenants would move in.

Such activities were never going to go unnoticed by the authorities in Dublin or the powerful Church. From the pulpit, the clergy denounced Gralton as ‘an anti-Christ’ and accused him of “leading a campaign of Land agitation”.

They also accused him of trying to lead the youth away from the Church and of teaching communism. Gralton also agitated the Free State forces. They attempted to arrest him in May 1922 and, as civil war loomed, Gralton decided to get out and return to the US, where he remained for a further decade.

He did not return to Ireland until 1932 when his brother Charlie, who ran the family farm, passed away. Buoyed by the change in government, he mistakenly believed the new Fianna Fáil leadership would allow for the development of progressive politics in Ireland.

He re-opened his dance hall, resumed land agitation and reignited the fury of the clergy, who urged parishioners to steer clear of his “den of iniquity”. As the authorities flexed their muscles against him, so too did his support locally grow. This is believed to have spooked de Valera.

By Christmas Eve 1931, the hall was burnt to the ground in an arson attack. Suspicion fell on the local IRA, incited by the clergy. A deportation order was also issued ordering Gralton — “an undesirable alien” and US citizen — to leave Ireland before March 5, 1933.

He went on the run for six months before finally being captured on August 10 near Mohill. Three days later he was deported to America from Cobh. He died on December 29, 1945 — more than 3,000 miles away from the home to which he could never return.

In Jimmy’s Hall, Gralton is played by Barry Ward, a Dublin-born actor who made his debut as a 14-year-old in Roddy Doyle’s acclaimed 1994 BBC drama, Family. Although since remaining in the profession for almost two decades, Ward is under no illusion that in portraying Gralton he has caught the biggest break of his career.

“It’s the kind of role that only comes along once in a career,” he tells me when we meet to discuss the movie in London, where the 34-year-old has been based for much of the last decade.

“For most people this kind of a break just doesn’t happen, so it’s really great. The very first role I did was a really, really great job as well. That was [director] Michael Winterbottom’s project, Family, which Roddy Doyle wrote for the BBC. That was amazing and I suppose I thought that it was always going to be like that. Then I learned over the years that that’s a rarity. So this is one of those real rare jobs.”

Working with a director as esteemed as Loach is also an occasion for Ward, with the 77-year-old veteran at one stage hinting that this may be his final feature film.

“It’s a terrific feeling to be the lead in a Ken Loach movie on top of simply landing a lead in a movie,” acknowledges Ward. “That it could be his last one just makes it extra special. It’s exciting as hell. On the very first day of the shoot we were pinching ourselves. All the actors were massive Ken Loach fans and you could feel the nerves.

"People were really nervous but I kind of thought that I can’t be… and this character isn’t. If anything he brings people together. He’s a leader amongst men and in the community. So I felt that I had to step up to that.”

Like many, Ward wasn’t acquainted with Gralton’s story, which has only been intermittently told over the years. “I knew Donal O’Kelly had a play about it,” he says of the Irish actor and playwright who in 2011 brought his dance and theatrical play Jimmy Gralton’s Dancehall to the stage and subsequently piqued Laverty’s interest in the story.

“I’d worked with Donal in the Abbey. I think he was writing the play at that time. He put on that show then, and he introduced me to Paul Laverty, the writer. So I only heard about Jimmy in passing and I knew scant details of his story so when I got the part I tried to read up on Jimmy, but there’s very little info around about him.”

Rail-thin, big smile and tousled hair, Ward bares little in resemblance to the balding, 44-year-old Gralton that returned to Ireland in 1931, although he says Loach and Laverty were happy to play loose with the facts while staying true to the heart of Gralton’s story.

“As an actor I wasn’t beholden to Jimmy’s past,” says Ward. “I didn’t feel the need to replicate him because nobody else knows him. There’s no footage of him in existence. There are a couple of photographs — and I look nothing like him.

"At the time of the story he was 44 in real life. So they were obviously playing fast and loose with the facts. So there was no real pressure to be true to who he was. Nobody was going to say ‘he wasn’t like that’. So you do as much as you can; learn as much as you can about him and hopefully it all comes out.”

Ward notes that he hopes Gralton’s story resonates with audiences. There are many parallels with modern Ireland, namely a working class beaten down by the wealthy; while the depiction of the Church will only inflame modern views of the organisation.

“A lot of Jimmy’s story was kind of swept under the carpet,” Ward adds. “So it’s great that his story is now coming out to wider audiences than before.” It’s a point acknowledged by Irish socialist councillor Declan Bree, who describes Gralton as being “on a par with Larkin and Connolly as one of the great Irish socialists”.

In 1996, Bree, then a Labour TD for Sligo/Leitrim, requested to see the Irish government files relating to Gralton, but after an ‘extensive’ search he was told by then justice minister Nora Owen that they were missing. It all adds to the feeling that the State would rather forget the whole affair.

This is now something that won’t happen. Ultimately, Loach hopes to do Gralton some justice. He says that the central message of the film is the need to give space to “dissident voices”. “Dissidence and countering the prevailing consciousness is a huge issue,” he says.

Citing the recent elections to the European parliament, Loach added: “There is one political idea that has currency, that the free market and the neoliberal agenda has to be allowed to operate. Although we are a very sophisticated society, challenging that idea is like challenging God.

Jimmy Gralton represented that alternative voice and finding a space for dissidents — and also seeing them as important alternative arguments — is a major question of our time.”

Jimmy’s Hall is currently in cinemas across the UK

DREAM JOB ALERT: Get paid to watch and review every episode of Father Ted