A united Ireland, the All-Ireland winners and the economy going south: Old Moore's Irish predictions for 2017

A UNITED Ireland, economic downturn and a coffee shortage - these are the topics predicted by Old Moore's Almanac for 2017.

The 253-year-old stocking filler has made a series of predictions for the new year, ranging from the credible to the outrageous.

In 2016 the Almanac's inhouse psychic predicted the year would not be remembered fondly, and that was truly the sentiment by the end of the year.

Other predictions for 2016 which came true included a split in the EU, Northern Ireland and Scotland in the spotlight and angry protests in London - so that covers Brexit.

Among his 2016 predictions, Old Moore also said there would be transport terrorism, airport terrorism and that Turkey would have a wretched experience in 2016.

There were terrorist attacks in Brussels Airport and on the city’s underground line. In France, a terrorist drove a truck into a crowd of people, killing 85, on Bastille Day.

In June Atatürk Airport in Istanbul was attacked, killing 45 people.

With last year's predictions in mind, here's what Old Moore's Almanac says is in store for 2017... 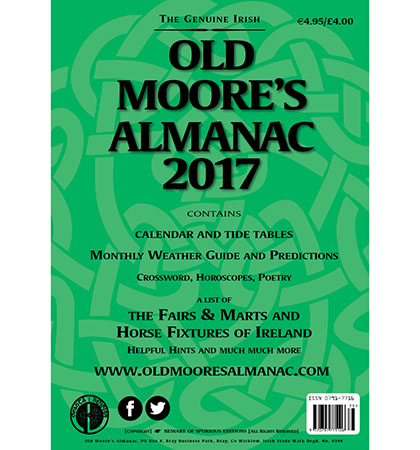 Hold onto your cash

According to Old Moore, 2017 is the year of the global economic downturn so this is the year to hang on to your wallet.

The weather won't be anything to write home about...

It will be another year of average weather, nothing to blistering and nothing too freezing, but a white Christmas for December of 2017.

The All-Ireland winners will be...

Old Moore says Dublin will be taking home the Sam Maguire cup, and once again Tipperary will be going back to Clonmel with the Liam McCarthy.

Talk of a united Ireland

There is more talk of Northern Ireland and the Republic becoming united within the EU.

Apparently, the geopolitical future of Europe will become right wing.

A robotic android interactive sex partner will hit the news. Yes, people will be able to order an iLover.

Bad news Down Under

Australia and New Zealand will have property crashes.

There will be several plane incidents in 2017, two major, one minor. Risk of two planes crashing. Plane being shot down or a near miss is likely. Turbulence due to global warming is in the news, especially in Asia.

Old Moore says Ireland is in danger of a lone-wolf style attack.

The Irish Government will be in trouble

The coalition government has trouble holding together as a team, with a risk of a new election. Irish economic growth stalls in 2017.

However, our Eurovision prospects are looking up...

Old Moore has said that Eurovision 2017  sees us in with a chance.

And time to tighten up on your internet security

There will be cyber hacking on an unprecedented scale in 2017, and unfortunately, this includes financial institutions/supermarket chains or other big business.

These are just some of Old Moore's predictions for 2017, to see them all get your copy here.