EXCITEMENT is building ahead of The Late Late Toy Show, airing on RTÉ One and RTÉ Player tonight from 9.35pm.

Over 1.5million viewers are expected to tune in to watch the show - hosted by Ryan Tubridy -  but for Irish fans in Britain there will also be a special screening in London to look forward to tomorrow.

Hosted by Fred Cooke and Joanne McNally, The London Irish Comedy Festival is bringing a special screening of The Late Late Toy Show to the English captial for the second year in a row.

Supported by RTÉ Player International, you can get in on the craic from home as you don your very best Christmas jumper for a special screening of the iconic show.

The Late Late Toy Show LIVE! will be hosted by Joanne McNally, co-host of RTÉ’s Republic of Telly and Fred Cooke, a regular star of the same show - and the pair are promising plenty of comedy, commentary, games and festive cheer.

Comedian and co-host Joanne McNally said: "I was raised on The Late Late Toy Show, cut me open and I'd bleed tinsel and batteries and that small kid from the Worx who used to do the book reviews.

"It's an absolute honour to host it overseas. Fred and I are two furry, non identical twins from Dublin who love toast, basically, we're the new Zig and Zag," she joked.

In keeping with the spirit of Christmas, organisers of tomorrow's Camden event are asking audience members, if they can, to bring an unwrapped educational toy, game or book for a child between the ages of 3 - 11 years, for Santa’s sack.

All toy donations will be gifted to Variety, the Children's Charity that deals directly with children, offering outings and special treats to young people and children who are sick, disabled and disadvantaged.

RTÉ Player International will also be giving away some great prizes on the night. 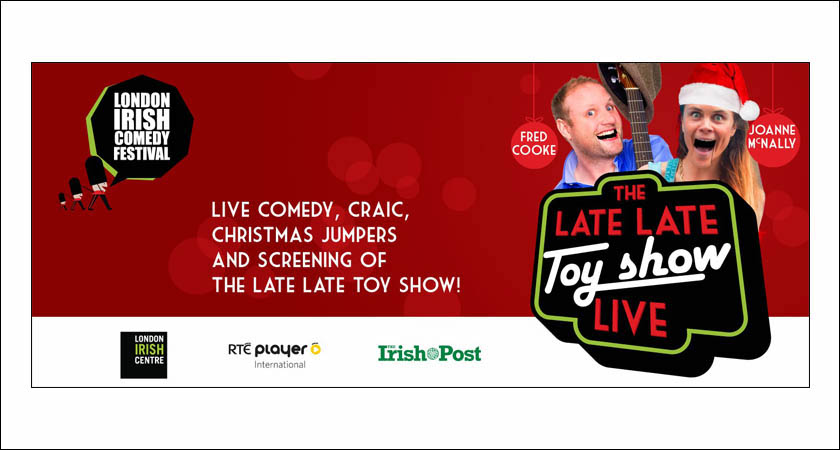 To be in with a chance of winning simply answer the following question and post the correct answer in the comment section of this story on our Facebook page or email [email protected] before 5.30pm this evening.

Who is the host of The Late Late Toy Show?