FOODIE HEAVEN: Ireland is a land of culinary riches and some of the world's best natural ingredients

IRISH natural products are among the best in the world.

A variety of reasons contribute to this happy situation, but it’s substantially a result of the countryside boasting superbly fertile grassland.

The high quality of much of Ireland’s pastures is because it rains a lot, as you may have noticed.

There are other elements at work too.

Because of Ireland’s northerly latitude the grass is rarely burnt by too much sun; conversely, for a country so far north, agricultural land is seldom covered in snow.

This relative mildness and absence of snow and ice is beneficial to the growth of green pastureland.

Added to that, the composition of soil in many parts of the county is ideal for good grassland production.

Areas such as the Golden Vale in Munster, an expanse of rolling pastures covering parts of Limerick, Tipperary and Cork, is supremely suitable for dairy farming.

Bordered in the east by the Galtee Mountains, this is an area that produces cheeses, butter, yoghurt and milk products.

Huge swathes of good grassland from Wexford up to Antrim are responsible for nurturing some of the best beef, lamb and pork in the world.

Not all land, of course, is equally fertile.

Ireland is unusual in that it is an island where most of the uplands are around the coast — the opposite is usually the case.

The coastal areas, therefore, are rugged regions with poor soil.

But even here, the land can have its favourable side.

Farmers will talk about “the hard chaw” being good for grazing animals.

In other words, the animal has to get right down to the base of the grass to get nourishment, and in doing so take up minerals that are ideal for producing fine specimens. Hence the traditional farmer’s saying, ‘The valley sheep might be fatter, but the mountain sheep are sweeter’. 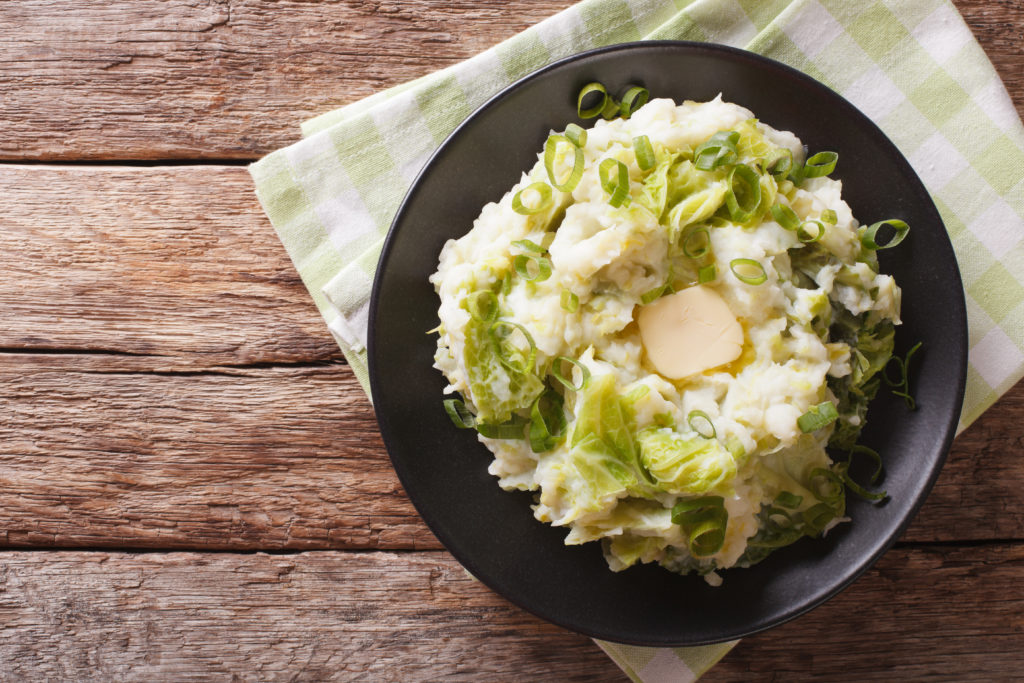 Colcannon is a favourite Irish dish

The quality of Irish food products has helped the renaissance of the Irish restaurant culture in recent years.

Although top gastronomic influences from all over the world have now been incorporated into Irish cuisine, the traditional bedrock of Irish cuisine remains — first class, fresh, tasty, home-grown produce.

In pubs and restaurants up and down the coast you’ll always find traditional oysters and Guinness.

One of the oldest restaurants in the world is reckoned to be the Brazen Head in Dublin, which, according to legend, opened for business in 1198.

Scant documentary evidence exists for this claim; nonetheless it’s safe to assume this venerable tavern has been serving the hungry (and thirsty) citizens of Dublin for some time.

Today it has a well-deserved reputation for excellent food, serving both traditional and contemporary dishes.

Beef and Guinness stew is a mainstay of the Brazen Head, as it is in pubs throughout Ireland. This is emphatically not a dish that would have been served in the 12th century — Guinness wasn’t invented until the 18th century, and the potato wasn’t introduced into Ireland until the 16th century.

Popular mythology has it that Walter Raleigh introduced potatoes to Ireland. He certainly owned land in Co. Cork and eventually became mayor of Youghal, but whether he brought spuds with him is a moot point.

Potatoes remain a staple throughout the country, with the top local versions being Colcannon and champ.

Colcannon is a classic, comforting mash of potatoes, cabbage and butter (or cream), flavoured with spring onions.

One recipe calls for grated raw potato to be mixed with mashed potato, flour and salt, then boiled before being sliced and fried in butter.

But whatever refinements on the traditional recipe you choose, alongside bacon and eggs or smoked salmon and crème, it truly is a regal dish.

Alongside its pubs, tavern and alehouses, Dublin also has a handful of Michelin-starred restaurants, including two with a brace of their coveted stars.

At the Greenhouse, Ireland’s best produce is on offer and given hugely imaginative twists. The menu changes with the season; in spring, succulent lamb is paired with piquant wild garlic; in the autumn, venison complements blackberries and wild mushrooms; in winter its salmon and Atlantic coast crab. 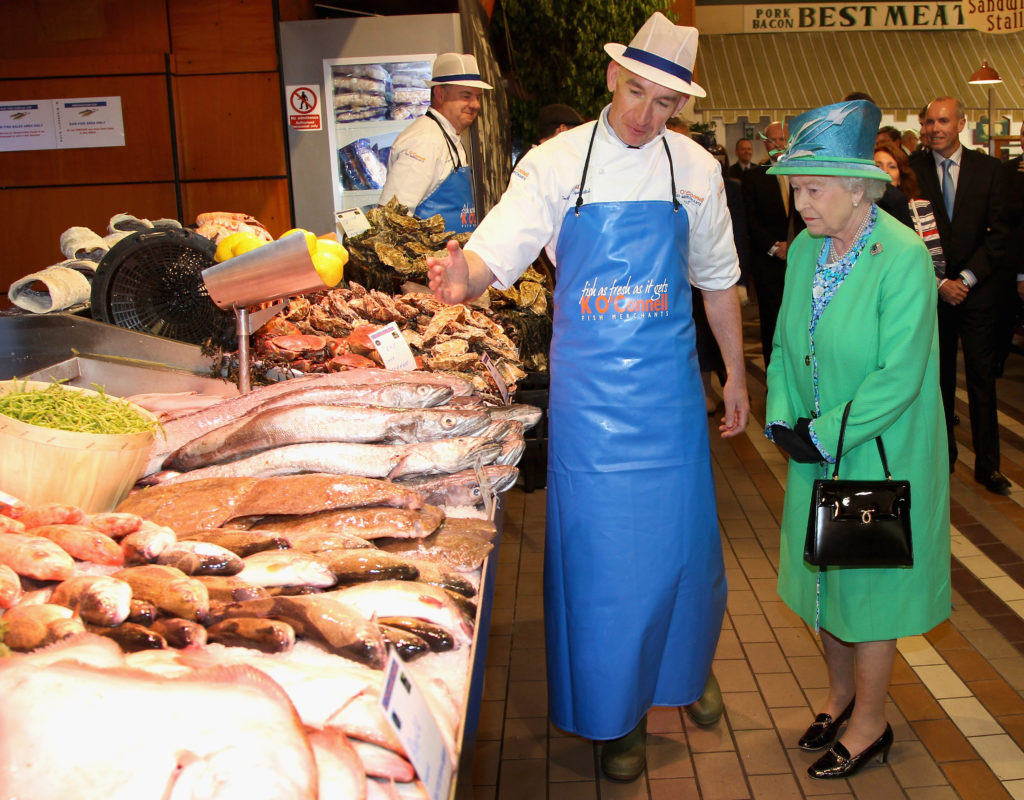 The Queen talks to fishmonger Pat O'Connell during a visit to the English Market in Cork, on the last day of her four-day visit to Ireland, on May 20, 2011

The other Michelin two-star establishment in Dublin is Restaurant Patrick Guilbaud.

Here you can sample the likes of butter roast Castletownbere Scallops or Kilmore Quay Turbot.

In Dublin, the one-star Michelin restaurants include Chapter One, L’Ecrivain Thornton’s, the Mint restaurant in Ranelagh and Bon Appetit in Malahide.

Although most worthwhile restaurants offer the best of fish dishes, obviously those near fishing ports have a head start.

The likes of the King Sitric Restaurant & Townhouse, East Pier, Howth offer oysters and mussels from the east coast, or lobster caught in Balscadden Bay.

Belfast has undergone a gastronomic transformation over the last few years. The Dirty Onion and Yardbird in Hill Street in the centre occupies what is believed to be Belfast’s oldest extant building, a bonded warehouse dating from the early 18th century. Meanwhile, the Guinness in the city's oldest pub, Kelly's Kitchen, relies on cellars dating back to 1720. This was the meeting place for the United Irishmen – but even if you’ve nothing seditious on your mind, it’s an essential pint stop, and they do a very fine shepherd’s pie.

Of course, because of the pandemic, dining out is off limits.

Many restaurants are boxing up takeaways of many of their signature dishes for their customers, until the time to reopen returns.

At the English Market in Cork city, described by no less an authority than Rick Stein as the "best covered market in the UK and Ireland", you’ll find some of Ireland’s finest produce on offer.

Ireland has long enjoyed a worldwide reputation for its prowess in brewing and distilling. But today it glories in an ever-expanding reputation for excellence in its foodstuffs as well.