The crowd gathered at Casey Joe's Bar where the octogenarian was also joined by the Lord Mayor of Birmingham Shafique Shah - who presented the Mayo-native with a lifetime award for his services to the community and to sport in the city over the years.

A highly regarded boxing trainer and mentor, Mr Benson first laced his own gloves as a ten-year-old back in his hometown of Ballyhaunis.

He progressed to win an Irish National Junior title before moving to Coventry with late wife Teresa and later relocating to his current hometown of Birmingham.

While receiving his community award during his birthday celebrations, Mr Benson said: “I am honoured to see so many of my old boxers turn out alongside our young crop of athletes who are aiming to make a name for themselves in the sport in the years to come.” 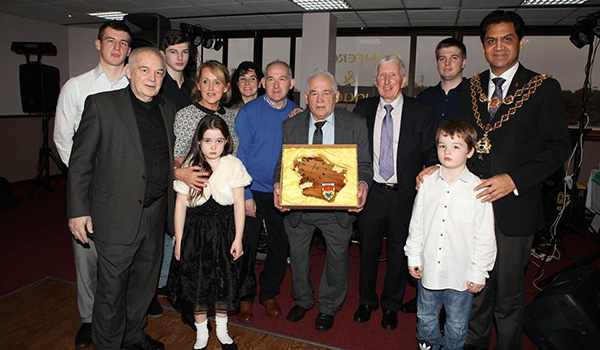 Pat Benson, centre, along with the Lord Mayor of Birmingham, pictured here with Pat's brothers, daughter and sister in-law, in addition 5 of Pat's 6 grandchildren

He added: “To see different generations of club members come together is testimony to our coaches, staff and great reputation.”

The boxing coach is widely regarded to have changed the lives of thousands of Birmingham youngsters through his boxing academy over the years, instilling important life lessons in self-esteem, self-respect and social skills through his training.

Among his many achievements one of the most poignant was his battle to salvage his Small Heath boxing club after it was devastated by a fire in 2010.

With the help of late friend Mick Burke, Mr Benson rebuilt the club and brought it back to its former success. He was awarded the BBC West Midlands Sports Awards Unsung Hero award that same year.

For further information about the club visit www.patbensonboxingacademy.co.uk

London's Mayo fans gear up for All-Ireland clash with Dublin