On This Day in 1997: Prime Minister Tony Blair 'apologises on behalf of Britain' for Irish Potato Famine

ON THIS DAY in 1997, British Prime Minister Tony Blair apologised to the people of Ireland for the Great Famine to mark the tragedy's 150th anniversary.

It was an apology that was generally welcomed by a country keen to mend the wounds caused by decades upon decades of conflict and hardship, and it would lay the groundwork for the historic signing of the Good Friday Agreement less than a year later.

Blair, who had only been elected Prime Minister a month earlier, declared that the British government had "failed their people", with over a million men, women and children perishing due to starvation and disease brought on by the blight over a hellish seven-year period.

"Those who governed in London at the time failed... through standing by while a crop failure turned into a massive human tragedy," he said.

Blair's apology came in the form of a letter, and was read out at an event in Co. Cork, commemorating the Famine, and the effect it had had on Irish society, politics and culture.

The Labour leader said it was "a defining event in the history of Ireland and of Britain that has left deep scars. 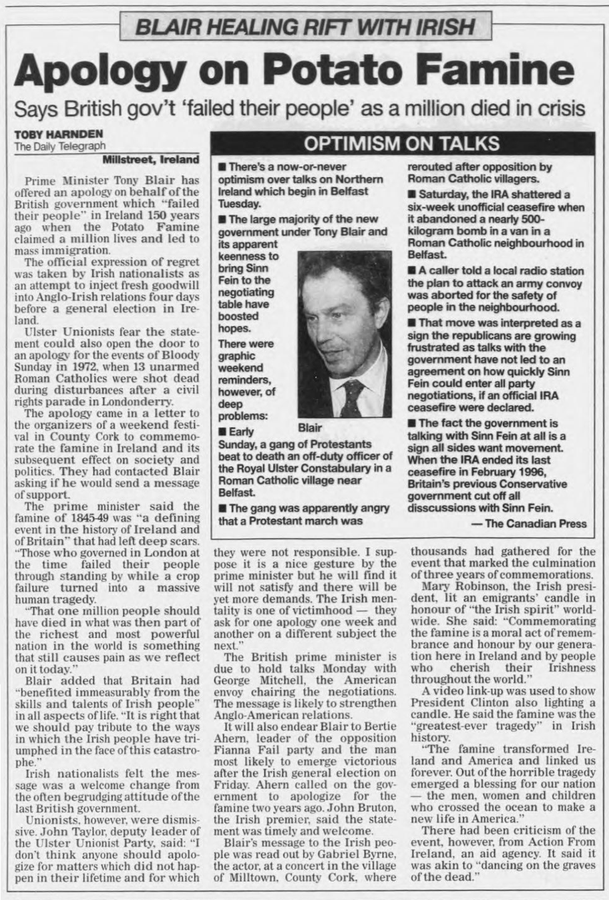 "That one million people should have died in what was then part of the richest and most powerful nation in the world is something that still causes pain as we reflect on it today."

Blair added that Britain had "benefited immeasurably from the skills and talents of Irish people" and that it was right that the UK should "pay tribute to the ways in which the Irish people have triumphed in the face of this catastrophe."

The Famine, the cause of which was ultimately put down to a blend of a destructive potato blight and an irresponsible and inadequate response from the UK government, completely changed the face of Ireland in the 19th century.

The population of the country dropped by around 25% in less than a decade due to the sheer number of deaths brought about by the crisis, and the mass-emigration that followed.