Armagh City, the home turf of St. Patrick, was once the very centre of Europe with its great teaching monastery and missionary abbey – and it remains a beautiful old place, the ecclesiastical fulcrum of the Island of Ireland — with two cathedrals, both called after St. Patrick, a unique situation in global religious affairs.

The Royal Irish Fusiliers Museum is an absolute must if you’ve any interest in military history, and still a good bet even if you haven’t. Irish, British, French, American histories are all explored.

The Dartry Mountains are among the most spectacular in Ireland. Its rocks have been eroded into high cliffs, isolated spires and curious carbuncles. This is wonderful hiking and climbing country.

Look out also for parties of European geologists — the drumlins of Co. Cavan are near text-book examples of this geological phenomenon.

The Walls of Derry/Londonderry are the only complete unbroken fortifications of any city in the Britain or Ireland. It would be fair to say that Derry/Londonderry, with a somewhat chequered history, has probably needed them over the centuries.

Along the coast, the Bishop’s Palace and Mussenden Temple, Downhill, overlook the immensely impressive sands of Benone and Magilligan strands.

Co. Down has huge attractions, including the Mountains of Mourne, Tollymore Forest (where a large slice of Game of Thrones is filmed) and Strangford Lough.

The latter, the largest sea lough in these islands, is a pit stop for some of the great feathered travellers of the world. An estimated one quarter of the world’s pale-bellied brent geese population arrive here every year from Greenland and the Arctic.

Binoculars are probably more useful here than your smartphone. 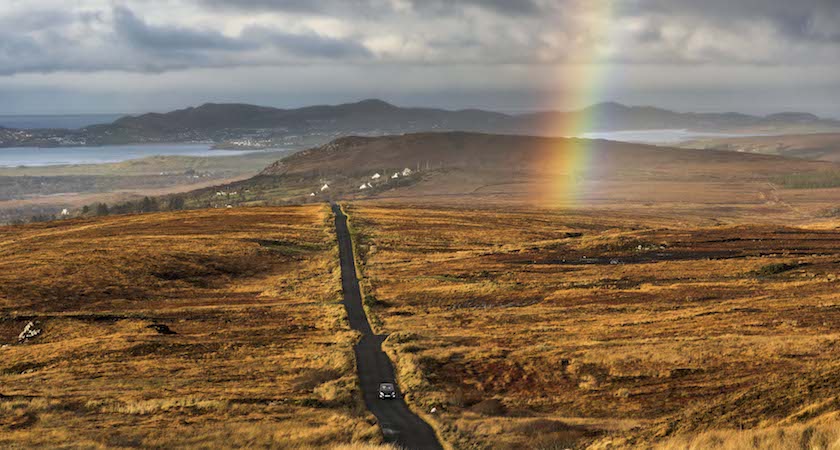 Discover what Co. Donegal has to offer, pictured above is Lough Salt (Picture: Tourism Ireland)

Malin Head, Fannad, the Slieve League Cliffs, the Blue Stack Mountains — Donegal is one of the most spectacular places in Europe.

It also has reminders of ancient society that lived here between five and six thousand years ago.

The court tombs of Mainnéar Mortlaidh and An Clachán Mór were built by these folk, but their exact purpose is unknown. Pop along and have a guess.

Fermanagh boasts the silent, spooky subterranean world of the Marble Arch Caves, Florence Court Estate (where the Irish yew originated) and Lough Erne with its bird- watching, angling, boating and Enniskillen which bestrides the upper and lower loughs.

Boa Island, on Lough Erne, is home to two extraordinary stone statues – the seemingly gloating Boa Man, also known as the Lusty Man (because he came from the island of Lusty More), and the Janus Stone.

No-one knows if this is a pagan idol or an early Christian statue, although latest guestimates for the stones’ age is around 2,000 years. So if they are Christian, somebody must have been very quick with the news.

Pop along and see if you can throw some light on it yourself. You might even want to write a poem about it. Seamus Heaney did – he called it January God.

“In the wet gap of the year,
Daubed with fresh lake mud,
I faltered near his power - January God.”

Leitrim is a narrow county, 46 miles in length, and can claim two miles of Atlantic coastline. It’s as though the county insisted it had to have one toe in the water no matter what. This is Ireland’s least populated county, with just over 30,000 souls.

You could pack them all into the Cusack Stand of Croke Park, and still have room for a few folk from Roscommon as well. But if it’s quiet rural countryside you’re after, then you’re spoilt for choice.

Which is kind of funny, because everything else is unspoilt. Lough Melvin is internationally renowned for its unique range of plants and fish – with three types of trout, this is ichthyology central.

Carlingford, one of the loveliest and best- preserved mediaeval villages in Ireland, lies at the foot of Slieve Foy in the Cooley Mountains. Should you accept the mission of climbing to the top of this mountain, you’ll see some ten counties of Ireland and well as the mountains of Scotland and the Isle of Man.

Co. Monaghan, like Co. Cavan, is dotted with drumlins, bucolic pastureland, and sleepy villages where time appears to have stood still. Except in the pubs, where traditional sessions are likely to be going at full throttle till all hours.

The Patrick Kavanagh Centre, Iniskeen, houses letters, manuscripts and memorabilia of the poet who wrote (amongst many other masterpieces) Raglan Road. 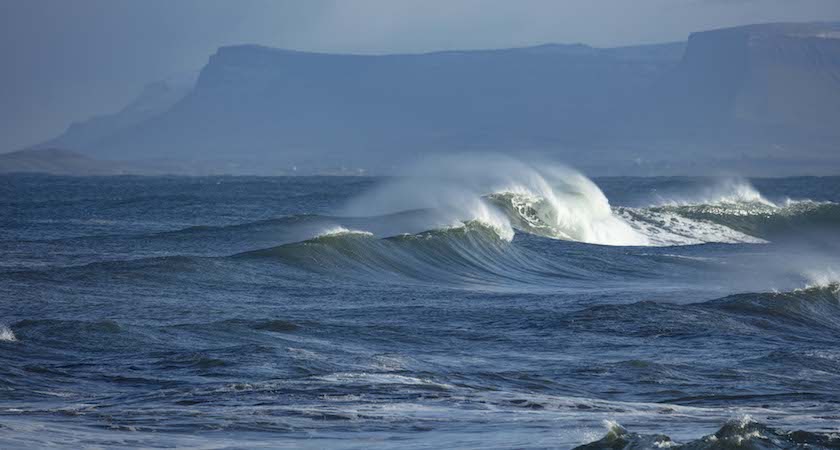 Winter waves on the Wild Atlantic Way near Easky, Co. Sligo with Benbulben in the background.

W.B. Yeats’ grave in Drumcliff Cemetery is an essential stop. After “casting a cold eye on life, on death” (as per Yeats’ instructions on his headstone), pass by, and a couple of miles onward to the magnificent Glencar Lough heaves into view.

Nearby is the gaunt Ben Bulben. Creevykeel, one of the most impressive of Ireland’s prehistoric sites, some 5,000 years old, lies in its shadow.

Co. Tyrone is liberally dotted with megalithic monuments and dolmens — with Beaghmore one of the most impressive. The intricate stone circles unquestionably denote considerable pre-historic effort, but their precise purpose can only be guessed at.

They were perhaps constructed in relation to the solstice, or to record the movements of the stars. Whatever their purpose, they provide a tangible link with our Tyrone ancestors of some 4,000 years ago.

In Strabane, Gray’s Printing Museum, Strabane has a collection of 19th century machines as well as other printing paraphernalia on show.

Connections with the US Declaration of Independence are explored.