Can you make me a cuppa? New foam tea aerosol hits the shelves and brews up a storm on Twitter

No More Tea Bags has set about revolutionising the way tea is made. (Source:File)

A TEA company claims it has created a revolutionary way of making the humble cup of tee taste even better.

No More Tea Bags allows fans of a cuppa to make a brew by using foam tea from a spray can. 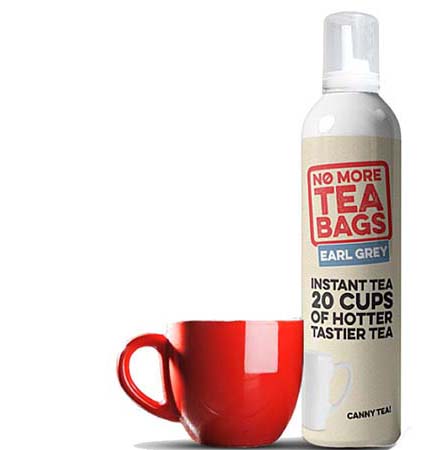 Could you be converted to tea in a can? (Picture: No More tea Bags)

It's designed to rule out inconsistency in tea-making, its makers Yum Cha tea say.

The British company, which is based in Leatherhead in Surrey, says that changing the size of your mug or brewing time means you can't guarantee the same great cup of tea time after time.

They claim their new technology allows for high quality liquid teas to be contained in an aerosol style recyclable can.

The foam tea is sprayed into a mug and then hot water and milk are added to make the perfect cup of tea without waiting or using a tea bag.

Inventor of the product Guy Woodall said: "According to research the average tea bag is brewed for just 13 seconds, which isn’t anywhere near long enough to appreciate the flavour of real tea.

"The tea we use in No More Tea Bags is brewed for a full five minutes such that a fuller flavour is achieved."

A spokesman for the company said the reception from tea drinkers has been "really positive".

"The feedback on the teas so far has been really positive," the Yum Cha spokesman said.

"A poll shows 75 per cent of people questioned would try the brand."

Twitter, however, didn't seem quite so keen on tea in a can.

Read some of the hilarious responses below...

Instant tea in a can?

I saw something pretty horrific today... spray tea in a can. pic.twitter.com/L1GojVlVES

Tea in a can, I've seen it all now! Is this the beginning of the end for the humble teabag? pic.twitter.com/vlp3GDtPyb

2016 has just thrown up the most pointless drink invention since bottled water in a can. Aerosol Tea. £5 for 20 cups pic.twitter.com/9LstkGi6Yj