TRIBUTES were paid to the former Lord Mayor of Cork, Terence MacSwiney at events held across London on the 100th anniversary of his death.

MacSwiney drew his last breath on October 25th, 1920, at Brixton Prison following 74 days on hunger strike in protest at his internment.

A playwright and author as well as politician, MacSwiney was elected as Sinn Féin Lord Mayor of Cork during the Irish War of Independence in 1920.

He was subsequently arrested by the British Government on charges of sedition and imprisoned in Brixton Prison where he remained until his death.

Honouring the 100-year anniversary of his death, members of the Terence MacSwiney Commemoration Committee (London) laid a wreath outside Brixton Prison on Sunday, October 25 and pinned a blue plaque to the prison wall.

MacSwiney’s grandson Terry Brugha and his great-grandsons Cathal and Rossa attended the event, as well as a grandson of his wife Muriel MacSwiney, Nigel Blakelock. 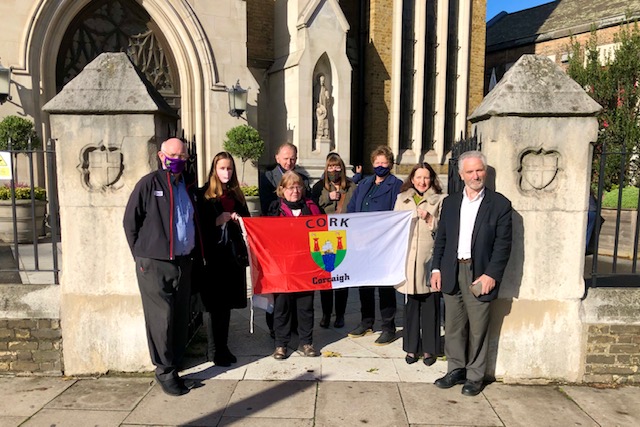 The brief service was musically framed by Donegal piper Anthon Docherty, while the proclamation was read by Stevie Mcloughlin and the oration was given by Frank Glynn.

Joe O’Dwyer represented Sinn Fein at the event, and the Committee’s Felix McGuire was master of ceremonies.