Five decades on the frontline - tales of an Irish community activist

I HAVE known Rose Morris for many years since our paths first crossed at the regional and annual Congress of the Federation of Irish Societies (now Irish in Britain).

Ironically, we are in touch more often now, during lockdown, as we both share dual interest on various Zoom events regarding Irish culture and welfare matters.

Rose is one of the stalwarts of Irish emigrants who came to Britain in the 1970s to find work.

For Rose this was to take up a teaching post in Bury, Manchester.

She was engaged to John Morris with plans to get married on Boxing Day 1970, which came to pass.

So far from Altaglushan in the parish of Galbally, near Dungannon in Co. Tyrone, John and Rose Morris would give to Manchester the best of their Irish values.

Apart from going to Irish dance halls, Rose and John had very little involvement in the Irish community until 1978, when they joined Sean Dempsey's Céili Club at St Malachy’s Parish Centre, Collyhurst and St Wilfrid's CCE in Hulme.

It snowballed from there until Rose had meetings to attend practically every night of the week and over the weekends.

Being part of the St Malachy’s Céili Dancing Club in the late 70s and early 80s, they headed out of Manchester for many events across Britain and as far as Ireland for céili nights and competitions and fleadhs.

She recalls fondly céilis’ in Bradford Town Hall run by the leader of Bradford Council, the late Luke Kearns from Tuam. 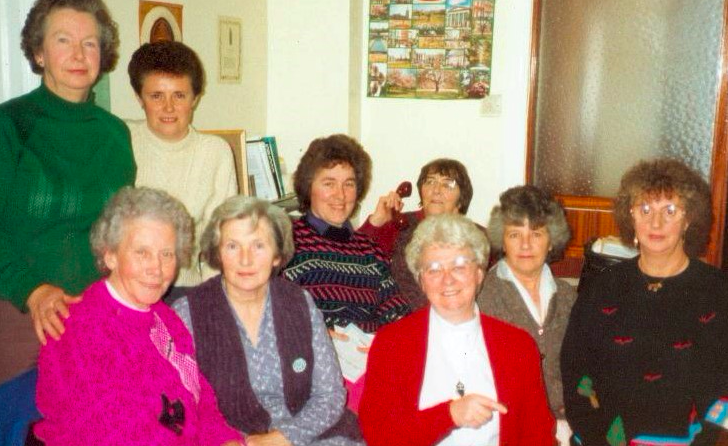 Rose Morris (third from left, back row) with fellow members of the Irish community in Manchester in earlier years

There were other nights too, in the Irish centres of Derby, Nottingham, Liverpool, Birmingham and Preston.

I asked Rose to share the highlights of her work within the community over the years.

It was no surprise that she started with the role she played in the creation of the Irish World Heritage Centre (IWHC).

In the early eighties a management committee was set up to work on the idea and they identified a derelict British Legion Hall in Cheetham Hill, which they purchased.

With voluntary help from local Irish construction workers, they had a partial IWHC to move into in 1984.

Two years later it was complete and officially opened in November 1986 by Peter Barry, the Irish Minister for Foreign Affairs at that time.

Rose was elected to its Management Committee in 1987.

Fast forward to the early 90s and there was demand for a larger centre.

This was when the Manchester Irish community took on the world with a vision of a worldwide, diaspora centre unlike any other.

Rose explains: “It was intended that it would serve as a lasting memorial that would recognise and acknowledge the contribution made by Irish emigrants across the world down through the centuries and to tell the story of Irish emigration worldwide.”

It was to be completed in phases. Firstly, it is in operation as a meeting and social centre, but its voyage is ongoing, with plans to add hotel facilities and sports fields.

The project was led by a group of twenty committee members and a small development team, who set about planning for growth in the business side of the IWHC to bring an income that would, in turn, lead to the expansion of its cultural programme. 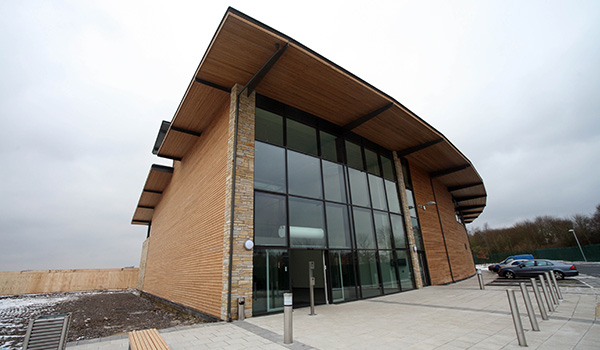 The ‘worldwide’ emphasis of the project attached the interest of the Irish Government and the European Union, with the provision of advice and capital funding and monitoring.

This was a project that also drew support from the Manchester Irish community and Manchester City Council - who later donated a thirteen-acre site for the new development on nearby Queens Road.

He was invited to officiate because he had expressed a wish to acknowledge the wrongful arrest and imprisonment of the Birmingham Six and Guildford Four.

He was joined on the day by President Mary Robinson, who later went to Warrington to be with the families of the two little boys killed in the Warrington bombing.

So, in the midst of trauma for families in Britain and, by implication, the Irish community in Britain, Manchester was leading the way in showing Ireland and its culture to a wider audience in Britain.

Over the years many leading figures have visited the centre.

So highly regarded is the IWHC, it has welcomed presidents Mary Robinson, Mary McAleese and Michael D Higgins.

Taoisigh who have paid a visit include Albert Reynolds, John Bruton, Bertie Ahern and Enda Kenny, as have British prime ministers Tony Blair and Gordon Brown.

From the sporting world, Jackie Charlton, Kevin Moran, Alex Higgins, Shay Given and Stephen Roache have all walked the IWHC’s halls.

Collections, documents and exhibitions will present the history of Irish emigration and the development of the global Irish family.

Many artefacts and items of historic interest have been donated, one very special amongst them is the Irish flag which was draped on the body of Michael Collins, presented by the Lord Mayor of Dublin on behalf of the Dublin Association, Manchester.

At a meeting of IWHC members in 1984 a decision was taken to set up two important groups to enhance the service to the Irish community.

One being an Irish welfare group and the other an Irish education group.

Both are still in existence today as Irish Community Care and the Manchester Irish Education Group.

Prior to this Irish welfare was looked after by a Derry priest, Fr Emmett Fullen at St Brendan’s Irish Centre in Trafford.

In 1985, following Fr Fullen’s sudden and untimely death, the Kerry priest, Fr John Ahern was appointed by the Salford Diocese to replace him.

He then approached Michael Forde, Chair of the IWHC, and local businessman, the late Tommy McKenna, with a view to establishing an Irish welfare organisation in the city to be managed by representatives of existent Irish organisations and volunteers.

A Dion (now Emigrant Support Funding) grant was secured from the Irish Government to recruit a coordinator and the Irish Community Care Manchester (ICCM) charity was founded.

Sister Rosaleen Murray of the Cross and Passion Order was appointed to oversee the organisation and a base was set up in the presbytery of St Lawrence’s Church.

Rose soon joined the organisation too, which she would serve for 30 years as trustee, volunteer, secretary, chair and even a stint as its manager.

As time went on, ICCM extended its services to the Irish in Levenshulme, St Anne’s, Old Trafford and Salford, always working under the mission statement “to provide facilities in the interest of social welfare for recreation and leisure time occupation with the object of improving the conditions of life for the Irish people in and around Manchester and for the burial of those with no next of kin”.

After thirty-four years Rose’s service and leadership with the charity came to an end when her retirement from the trustees’ board.

Her work was duly recognised when she was honoured with the Irish in Britain ‘Trustee of the Year Award in 2019. 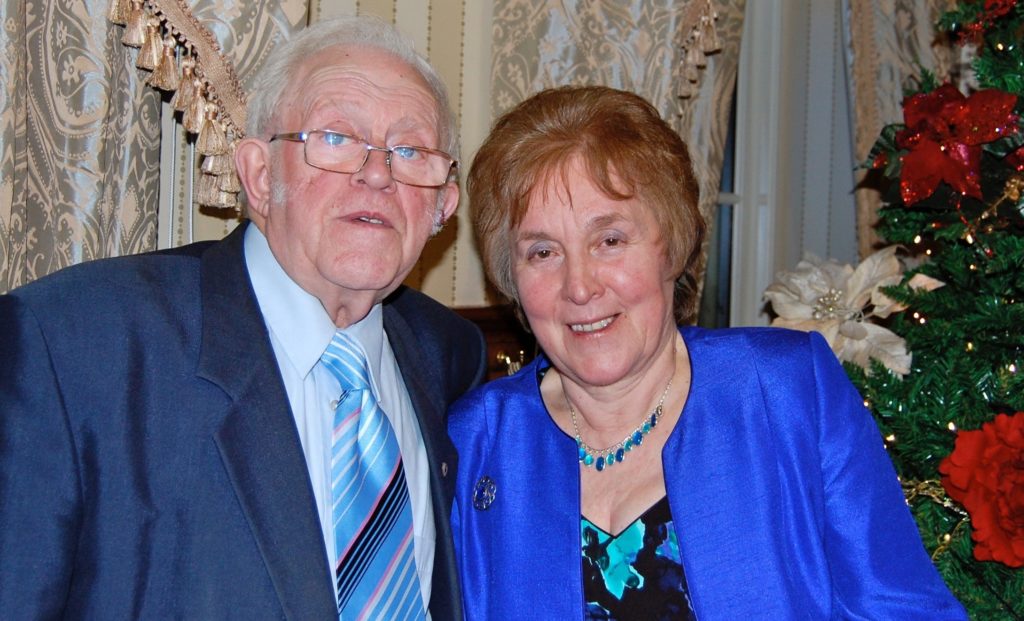 Rose with her husband John

Throughout all those years on the frontline of services for the Irish community in Manchester, Rose also found time to pursue her two great interests of Irish culture - drama and literature.

She helped develop the Aisling Players, which were founded at the IWHC in 1987 and also hosted drama festivals and conferences.

Another of Rose’s highlights of a life spent among Manchester’s Irish community, was when the IWHC held their first St Patrick’s Day Parade on March 17, 1990.

On that day, the centre’s members paraded to St Chad’s Church and attended a Mass there celebrated by Fr Bernard McGarry before returning to the Centre.

It is interesting to note that at that parade the County Longford Association were the first to display a parade banner.

The following year, 1991, the parade was extended to go to the roundabout at the end of Cheetham Hill Road following Mass said in Gaelic at the IWHC.

It was in their third year, 1992, that the St Patrick’s Day Parade was extended as far as Albert Square for the first time, where it was reviewed by the Lord Mayor of Manchester, Councillor Billy Egerton.

Since then, they have continued to follow the route from the IWHC to Manchester Town Hall and back on the return journey for a fun-filled day celebrating Ireland’s patron saint.

It is another of the many successful projects that Rose has had a hand in over the years. 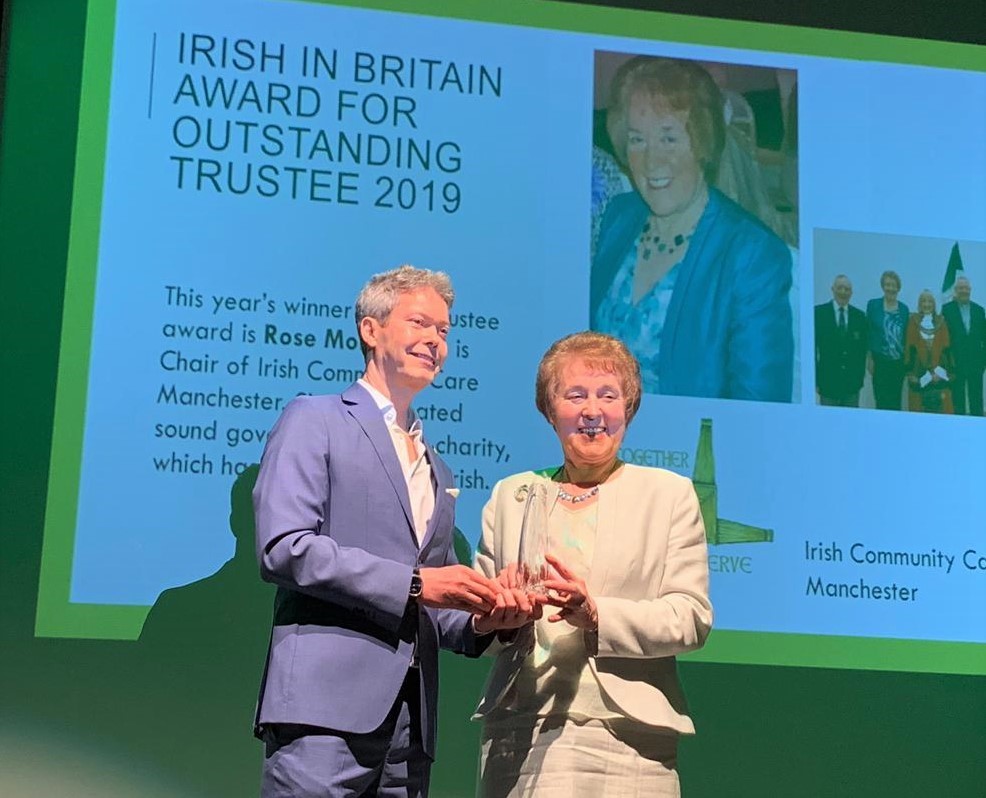 Rose Morris receiving her Trustee of the Year Award in 2019

And that us not lost on those around her.

Councillor Pat Karney, who represents Manchester’s Harpurhey ward, said of the community stalwart: “Where do you start with Rose Morris, a truly wonderful example of Irish people in Manchester, an amazing human being.”

Today Rose spends much less time among the community and more time at home with husband John.

Although lockdown has stopped them from visiting Tyrone in 2020, where they usually spend several months of the year, they are hopeful to be back there this summer and also have plans to celebrate their 50th wedding anniversary this year.

In our most recent Zoom call, I asked Rose for some final reflective thoughts looking back over her fifty years in Manchester and whether she would ever move back to Ireland.

“We have two sons Séan and Gerard and three grandchildren,” she said.

“We would find it difficult to cut our links with Manchester both in the cultural activities and all the friends I have made over the years,” she added.

“Michael Forde has been a major figure in making much of what I was involved in Manchester happen.

“Also, Manchester born Brian Kennedy of Donegal/Mayo heritage was by my side as we all worked to raise the profile of all things Irish in Manchester and beyond.

“Thankfully we still have a band of hard-working fellow IWHC trustees, but unfortunately many of those who started on the board at the same time as Michael, Brian and I, have now passed away, but they have left a lasting legacy behind them.

“The years have been a great opportunity to connect with people from every county in Ireland and to keep on discovering and learning about the history and heritage of the land of Ireland we left but brought the essence of what is to be Irish with us.”

WATCH: Schoolchildren in rural Australia expertly belt out a song in the Irish language