THE response of the Irish community in Britain to the ongoing Covid-19 crisis has been commended by Irish Ambassador to Britain Adrian O’Neill.

Speaking at Irish in Britain’s (IIB) AGM this month, the Ambassador acknowledged the “tough year” everyone had faced before praising the spirit of collaboration shown by Irish organisations in their response to the crisis.

“The challenge now is to sustain this collaborative effort and response during the winter and into spring.,” he added, before assuring attendees that although the Irish Embassy in London was currently closed to visitors due to the second national lockdown, “metaphorically our door remains open”.

More than 90 of its member organisations and friends attended the Zoom event, held on November 11.

The impact of Covid-19 was a recurring thread through the event, as speakers paid tribute to the response of Irish in Britain members and the wider Irish community to the challenges the pandemic has created.

Chair of Irish in Britain, Patrick Morrison said: “I have been heartened by the actions of individuals and the whole community in dealing with the ongoing challenge presented by Covid-19 and seen first-hand how the community has continued with its passion to support each other.”

He added that IIB “must show our strength in continuing to be open, inclusive, representative and in celebrating our diversity”. 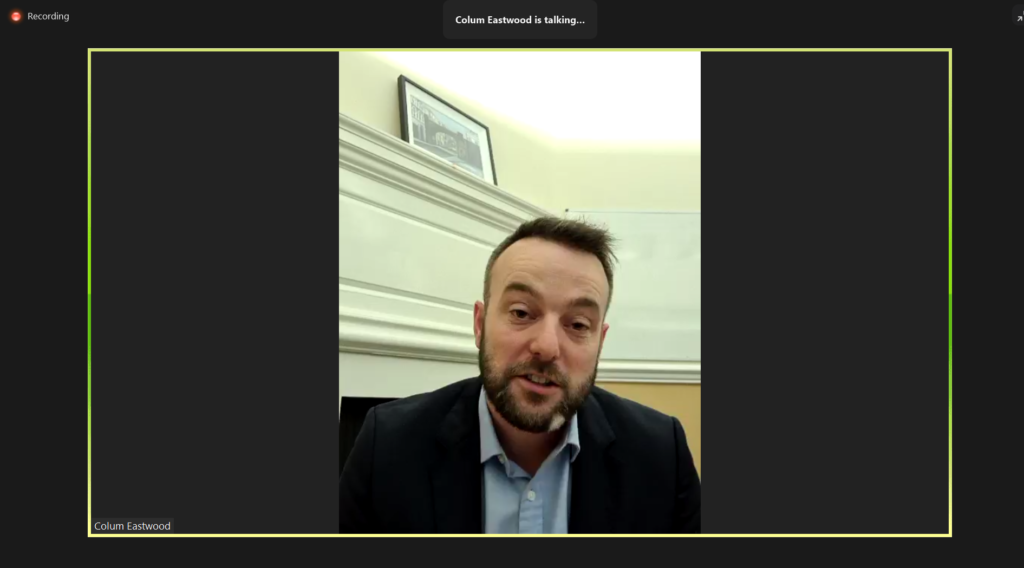 Among the AGM attendees were two daughters of Margaret Keane who have been forced to launch a legal case for the right to have an Irish-only inscription on their mother’s gravestone.

Guest speaker for the event was Caoilfhionn Gallagher QC, who represents the Keane family pro bono with legal colleagues Mary-Rachel McCabe and Caroline Brogan, who made a powerful speech about the ongoing campaign to overturn the ruling.

SDLP Leader Colum Eastwood also joined the meeting as a guest speaker, in which he welcomed the impending Joe Biden presidency in the US, before discussing the impact of Brexit and the vital importance of upholding the Good Friday Agreement.

Irish in Britain CEO Brian Dalton referred to how painful the past period of eight months had been, before reminding those in attendance that the pandemic had also prompted inspired action from people across the community.

“It has also been characterised by hope, by community activism, by volunteerism and resilience – the mission of ensuring no one gets left behind,” he said.

Celebrating the contribution of Irish in Britain’s member organisations to that, he explained: “Day in day out, in every corner of the country the response has been incredible – we are hugely proud to represent this network of compassion and of creativity.”

Finishing with "a message of hope for the future", he added: "We are, and always have been, a community that understands the culture of renewal and rebuilding. We will do that again over the years ahead."