The Co. Meath native’s boundless energy and clever curiosity make her a popular presenter - a role she pursued after first working as a journalist in Ireland.

Her first major documentary, Oi Ginger!, aired on RTÉ in 2014 to critical acclaim and led to follow up series Angela Scanlon: Full Frontal in 2015.

Later last year she landed a role as the digital host of The Voice UK and has since presented the BBC’s live coverage of the T in the Park festival, their red carpet BAFTA show and has become a regular on The One Show.

On Friday she will be at the London Irish Centre in Camden, where the Bloomin' Lovely Night Out with Angela Scanlon event is being held to raise funds to support the vulnerable Irish community across the city.

Ahead of this week's charity night, we spent 10 minutes with the Irish star and ...

I've just been in Houston, Texas filming a documentary for the BBC on Donald Trump's 'super fans'. We were travelling around the country for three week meeting young people ahead of the US election in November.

I've been given a glimpse into some of the young minds that will occupy this amazing country long after Trump and Clinton are long gone...

It's bonkers, mind-boggling and frustrating at times but I feel really lucky to have experienced first hand what will go down as one of the most divisive presidential campaigns in American history.

My granny. She had 15 children and lived until she was 93 with lipstick and a twinkle in her eye.

This one. I love being in my thirties. I feel more self assured, less self conscious. I got married and moved to London, I've been lucky enough to have worked on some amazing projects and do shows that I absolutely love.

Villagers' The Pact. Such a brilliantly captivating and unconventional love song. I tend to gravitate towards quite melancholic music so anything that says something without making me cry I try to remember.

Also Conor O’Brien as a front man is a genius. Or Anthony and the Johnson's Bird Gerh’l - it's not new but still mesmerising.

Always home (Meath) but I absolutely adore West Cork. The people, the food, the views and the mood. I would happily live there in the morning.

But when I need a real top up I head to Belmullet, its rugged and beautiful and bloody wild. I've had many raucous and memorable nights there.

A Girl Is a Half-Formed Thing by Eimear McBride. It's heavy going, the style of writing is really frantic and raw and almost a bit feral and disturbing and brilliant.

It is dark. It reminded me of the fragility of the mind and how vital it is for us to talk openly about mental health. Thankfully people are speaking out more in mainstream media but we've still got a long way to go.

Louise ONeill. She's a friend and an incredibly talented author, her book Asking for It is phenomenal. And Joe Caslin, a teacher and artist who is does brilliantly emotive, sometimes political murals in towns around Ireland.

I love Pinterest. I find myself losing hours of my life pouring over other people's. Is Instagram a website? I'm @angelascanlon and annoyingly enthusiastic for it now.

'You get out of life what you put into it' was the saying most often heard in my house growing up and a sentiment that both my parents shared. As a kid it was slightly terrifying but mostly annoying; the notion that I was solely responsible for my own life.

Of course handing over control was a somewhat risky approach with a somewhat reckless teenager but it seemed to work. It made me take responsibility for what I did and realise early on that with a bit of stubborn grit and a few sleepless nights I could do anything.

Dishonesty. I just really struggle with people who aren't direct. If someone tells me something no matter how outlandish I believe it because why the hell would you make it up? I've had to hone my bullshit radar over the years.

At the moment I live in East London and I love it; the noise, the bustle, the food and canal and the park.

It's such an incredibly diverse area and reminds me of why I was drawn to London in the first place -  a melting pot of people from all over the world doing amazing things.

But I find myself craving space, maybe it's an Irish thing or maybe it's a human thing but that desire for wide, open space seems to be growing.

I do think about buying a little pile in Mayo or Cork where I can escape to recharge my batteries when London makes me feel battered.

It's not. Unless someone cooks terrible food for you. If they've gone to the trouble then just nod, smile and throw it down the hatch.

I once visited a tribe in Laos and when we were leaving the chief sacrificed a chicken for us. An old woman pulled the cheek off this freshly killed chicken and fed it to me with her bare hands.

I don't eat meat so this was particularly disturbing (and her hands were filthy) but that was one of my favourite days ever. Moral of the story is - lie, eat and say thank you.

I don't believe in guilty pleasures although I do a radio show on Virgin with comedian Russell Kane every Saturday morning and we have a feature called Guilty Pleasures where we both pick a track and let the audience decide. Mariah Carey features. A lot.

The Bloomin' Lovely Night Out with Angela Scanlon is at the London Irish Centre in Camden from 7pm on Friday, October 14. Tickets cost £45 each and can be purchased HERE 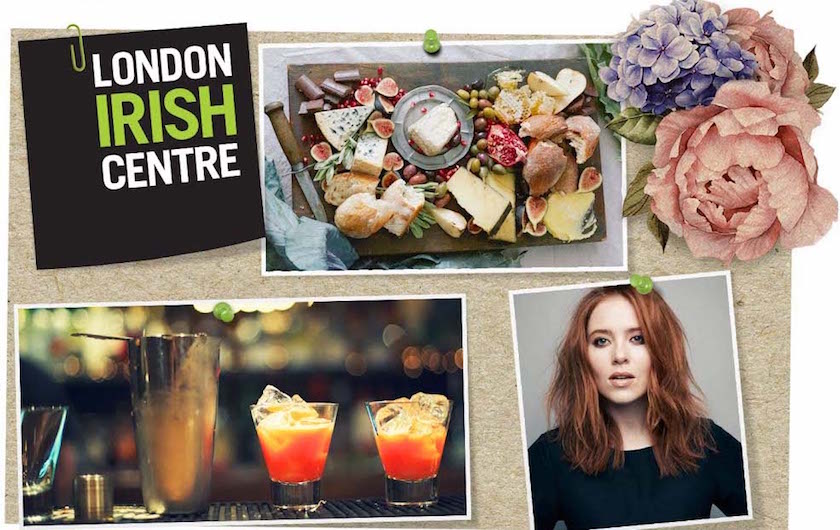 By: Siobhan Breatnach  -  8 years ago