Luxury in the heart of Belfast

A WARM WELCOME: The lobby at the Fitzwilliam Hotel, Belfast.

MAL ROGERS enjoys a stay at the Fitzwilliam Hotel, within striking distance of some of the world’s greatest pubs, and a spot of history.

THE five star Fitzwilliam Hotel is bang in the middle of Belfast. Within a few minutes stands the City Hall, the Linen Hall Library and the Ulster Hall. All three are of absorbing interest, although the latter has a footnote in rock history that nowhere else can boast: this is where Stairway to Heaven had its first live performance. On March 5, 1971 — at the height of the Troubles, and with civil disturbance, violence and mayhem a daily occurrence in Belfast — Led Zeppelin appeared at the Ulster Hall

I was pondering this as I made my way from Great Victoria Street rail station, a few hundred metres down the road to the Fitzwilliam Hotel.

The mayhem has all gone, and Belfast has ascended into peaceful obscurity once again — probably one of world’s more peaceful cities these days.

The rooms at the five star Fitzwilliam are, as you’d imagine, top notch.

The huge king-sized bed, so big it could probably have accommodated most of the staff, was one of the most comfortable I’d laid my head down in a very long time.

Linen sheets, downy feather pillows, and more cushions than you could possibly use. A desk by the huge picture window overlooked the streets below. The ideal place to write my memoirs of Belfast — once I’d come back up from the cocktail bar. My life is one of relentless industry, as long as I don’t have too many cocktails.

As you would expect from five-star digs, all types of digital wizardry is available in the bedroom: USBs for plugging in your music, a huge flat screener so that you needn’t fear the silence, and a pack of playing cards (really) if you wanted to practise your magic tricks. 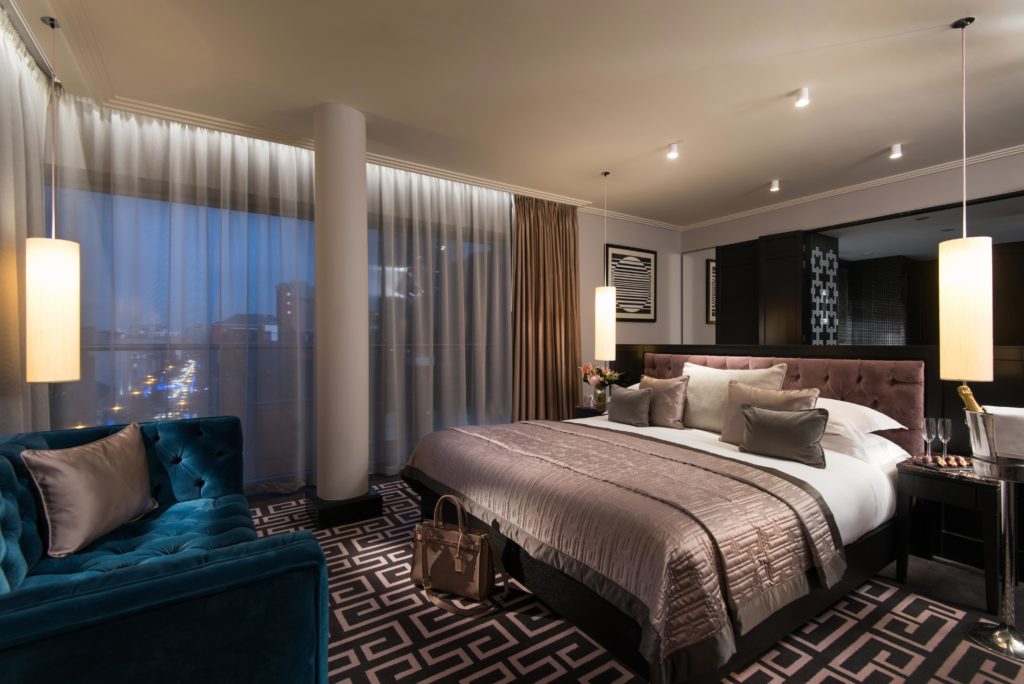 SPECTACULAR SLUMBER: A deluxe room at the Fitzwilliam Hotel.

Despite being a top boutique hotel, there is no pool, spa or gym — all of which I was fully determined to avoid in any case. What there is though, is oodles of charm.

Nonetheless, if you like watching urban scenes (which I do) it’s worth blagging a top floor view.

But it’s time to visit that cocktail bar.

It’s a cosy space with intimate snugs seemingly designed for getting up to no good. The cocktails are a good mix in more ways than one. The traditional favourites are there — mojito, Singapore sling, Margarita, as well as some fine show-off concoctions. I went for what was called The Prestige: Jack Daniels Tennessee rye whiskey, Angostura bitters, maple syrup. Strong? It would have kick-started a dodo.

The Restaurant at the Fitz I found to be a first class place for dining, chatting, eating, being happy, having a drink. My wait person Sebastian was obviously born to be in the hospitality trade. Chatty but not garrulous, knowledgeable without being a smart Alec, and not getting too deeply into how much Guinness should be used in the wheaten bread mix. I confided in him that in my opinion, they got the mix just right.

Starters? But of course. Three fat plump scallops with pickled apple purée were done to a turn, as was my chicken supreme, my haggis something or another, rainbow carrots, onion purée, Lyonnaise potatoes.

When I dine in Belfast I can’t help but think of Clement Freud. The restaurant critic once spoke about his trip across the Irish Sea. In Belfast he was much taken by a sign in a pub reading: "Pint, pie and a kind word – a fiver." (It was a long time ago.)

Clement was duly served an immaculate pint of stout and a serviceable enough looking meat pie; but the chat didn't seem too forthcoming. "Hey! What about the kind word?” he enquired. The barman came back, leaned over the bar, and conspiratorially whispered, "If I were ye, I wouldnae bother eatin' the pie." 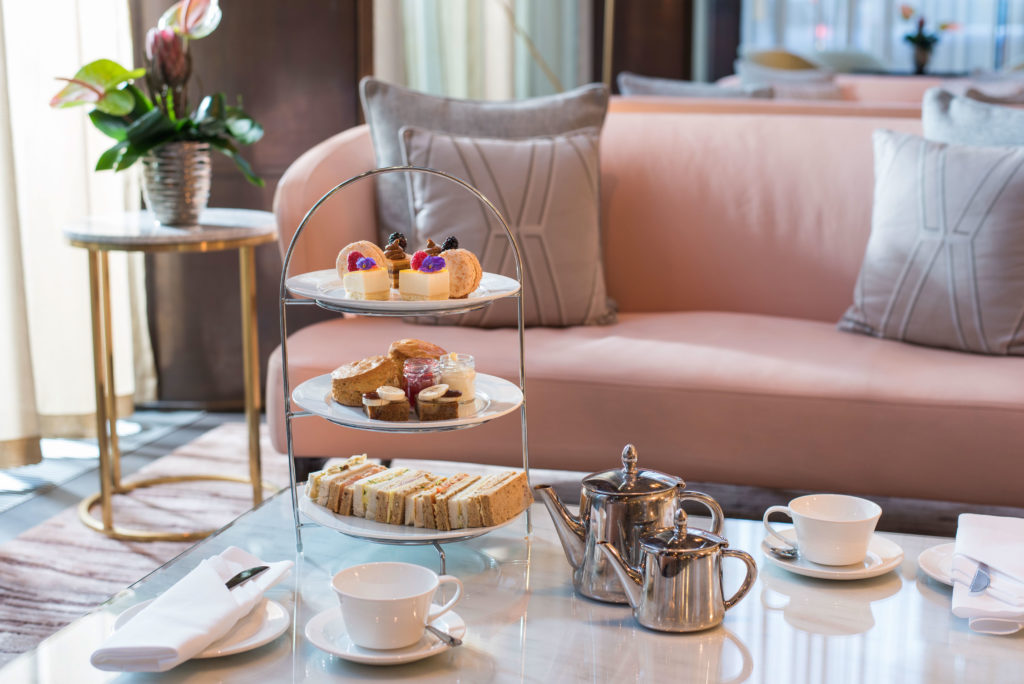 Afternoon tea at the Fitzwilliam Hotel.

This is an unlikely scenario these days in Belfast, and certainly not if you’re staying at the Fitzwilliam

The hotel is close to many of Belfast’s notable nooks such as the Linen Hall Library, as well as quite a few crannies — and none crannier than the Crown Liquor Saloon. This is one of the great pubs of the world, oddly enough owned by the National Trust. A gem of Victorian splendour – wood panelling, extravagant brasswork, Italian tiles, real gas lamps, stained glass windows, snob screens, private snugs. Some of the fixture and fittings may appear extremely opulent for a public house. That’s because their the result of dogged thievery. Shipyard workers who were regulars at the Crown helped decorate the bar with swag from the Titanic and other ocean liners. They used the swag from Harland and Wolff to discharge their debts. Apparently the ‘bartering’ became so sophisticated that there was even a Titanic ‘price list’. Sit back and enjoy a pint in one of the snugs, the while marveling at the decorative carpentry and glasswork, and just think — quite a lot of this could have ended up at the bottom of the Atlantic Ocean

Belfast has a past for which the kindest word would be interesting. It’s a five minute walk from the Fitzwilliam to Kelly’s Cellars in Bank Street. In the 1970s this was inside the metal ‘cage’ that enclosed most of Belfast’s shopping areas. To enter to do the shopping or ‘get your messages’ as they still say locally, you had to submit to a search by an RUC officer or a British soldier. It wasn’t very jolly.

But Kelly’s has seen turbulent times before. This is one of Belfast’s oldest pubs, a frequent meeting place for the United Irishmen in the run-up to the 1798 rebellion. As a not-qualified-at-all historian, I think I’m right in saying that Henry Joy, on the lam from English soldiers, hid behind the bar in this very establishment.

The pub was founded in 1720 — and 300 years after opening for business Kelly's manages to be a cross between everyman drinking pub, political meeting place and historic museum. Traditional music at the weekend too — Belfast is an epicentre of exceptional seisúns. This is the ideal place to meet Belfast people — even if you aren’t planning a rebellion.

You’re near the cultural heartland of the city the Cathedral Quarter, Belfast’s old warehouse district surrounding the impressive St. Anne's Cathedral. Other hallowed places include Oh Yeah founded by, amongst others, Gary Lightbody of Snow Patrol, as well as the Metropolitan Arts Centre. This stunning asymmetrical tower of brick and volcanic stone houses galleries, art installations, performance spaces, experimental works and endless goings-on. All sorts.

St George's Market, the oldest covered market in Ireland, is a combination of farmers' produce and food market, as well as second hand stalls selling everything you need — and much that you probably don’t.

Look out for the statue of Alec the Goose at the entrance. The sculpture is a tribute to a popular goose who used to waddle around this area of East Belfast in the 1920s.

I think you can tell a lot about a place by the nature of the statues the locals put up.

The novelist Owen Hannay said in his autobiography, "I was born in Belfast and brought up to believe that, like St. Paul, I am a citizen of no mean city."

Dark, dramatic, rollicking Belfast remains today, no mean city. He was right, and he didn’t even have the comforting thought of heading back to the cocktail bar at the Fitzwilliam and thinking, maybe I’ll try the Singapore sling tonight.

Autumn at the Fitz

With the darker nights creeping in and the temperatures falling, the Fitzwilliam Hotel in Belfast has the perfect autumn offer to brighten your spirits. The Fitz in the Fall package includes an overnight stay, a two-course evening meal, and a full Fitzwilliam breakfast the following morning.

Cian Landers, general manager at the Fitz told me that  it’s not just the quality of the surroundings that people come for. He said: “We have incredible bedrooms, and the food is first-class . We have the best welcome in Belfast and a dedicated team of hospitality professionals that look after every guest with the greatest care and attention.”

Fitz in the Fall Package, from €125 per person sharing per night

To book visit www.fitzwilliamhotelbelfast.com/offers to book or call 0290 442080.