TRIBUTES HAVE BEEN paid to

WE look back on some of the Irish people  - or those associated with Ireland  - who we bade farewell to in 2016. Some well-known faces, some perhaps not so familiar, some whose work was invaluable to the community, and some who were, quite frankly, notorious rather than famous.

Caroline Aherne was an award-winning comedian, actor and writer, best known for her role as chat show host Mrs Merton and for co-writing and appearing in The Royle Family sitcom. Her parents were Irish (her father was a railway worker), and the family moved to Manchester when Caroline was two. 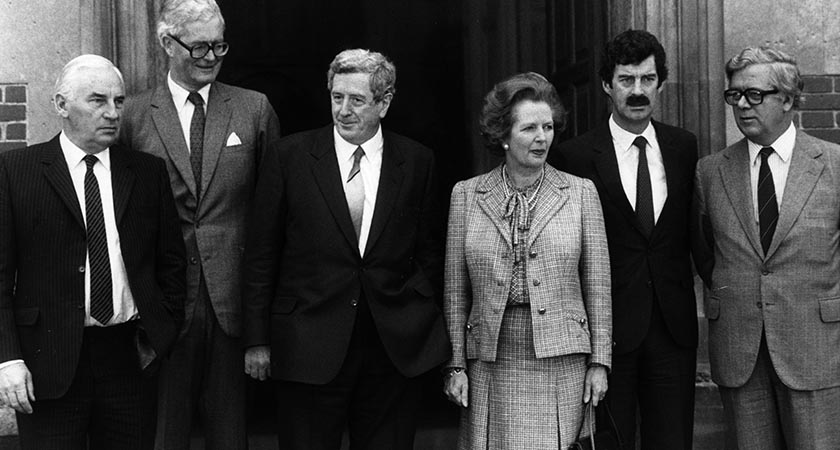 Peter Barry was a Fine Gael politician and businessman serving as a TD from 1969 to 1997, and as Minister for Foreign Affairs from 1982 to 1987. He helped negotiate the Anglo-Irish Agreement.

Father Bill Boyd was the longest-serving military chaplain in the British forces when he retired in 2008, following 38 years of continuous service to the Nato community at joint headquarters, Rheindahlen. Prior to his military career he spent many years serving the Catholic community in Gloucestershire.

Ray Brady was an international footballer who played in England in the late 1950s and early 1960s with Millwall and Queens Park Rangers.

Robert McFaul 'Bobby' Campbell was a Northern Irish international footballer who played as a centre forward. His club career included stints with Aston Villa, Sheffield, and Bradford City — with the latter he made over 300 appearances, becoming the club’s all time leading goalscorer with a total of 143 goals.

He subsequently ran a working men’s club in Huddersfield.

Pádraig Duggan was a founding member of the band Clannad. He was a singer and played guitar, mandolin and mandola.

He was the longest serving editor of Granada Television’s World in Action, having gone straight from a career in local newspapers.

International rugby player and coach Anthony Foley began his sporting life playing Gaelic football and hurling before embarking on a career in rugby. He won 62 caps for Ireland and 202 for Munster.

At the age of 100 Maurice Gaffney was still practising law at the bar. He was, in short, the oldest and longest working barrister in these islands, and probably all of Europe. He prided himself on being an expert on railway law.

Mary Gallagher O’Rourke was the outstanding Irish violinist of her generation. She gained international as a soloist, and excelled as an orchestral leader in Ireland and Britain.

She died in August aged 76. 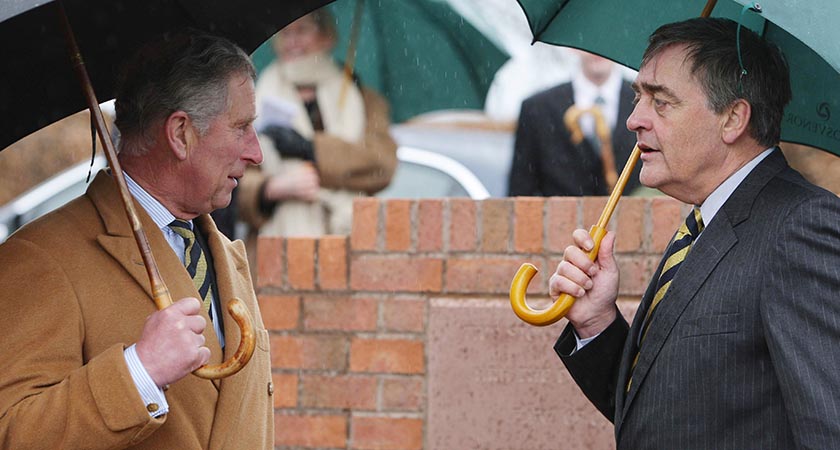 One of the richest men in Britain, the Duke of Westminster owned some of the most expensive real estate in the country.

He was brought up on a farm on the island of Ely on Lough Erne, and in later life lamented the fact that the accident of inheritance had taken him away from the placid life of an Ulster beef farmer.

He had a long military career in the British Army, reaching the rank of Major General in the North Irish Horse.

The Duke of Westminster died August 9 aged 64 of a heart attack.

The bulk of his career was spent in London where he covered a period coinciding with a time of heavy Irish immigration to Britain, as well as the Troubles.

He was best known as the portrayer of the appalling priest Father Jack in Father Ted.

His other notable roles were in The Italian Job (1969) alongside Michael Caine, and as the father of Desmond Doyle (Pierce Brosnan) in Evelyn. He also portrayed Labour Leader John Smith in The Deal.

Frank Kelly died of a heart attack aged 77, on February 28.

Kelly converted to Islam after being jailed in Saudi Arabia for making and transporting whiskey. He was radicalised and joined Islamic State.

The older brother of Brian Kennedy, singer songwriter Bap was Energy Orchard’s front man. After leaving the band he collaborated with many acts including Steve Earle, Van Morrison, Shane MacGowan and Mark Knopfler.

Joe Lennon captained Down to their All-Ireland title in 1968. He was associated with the GAA club for three decades. 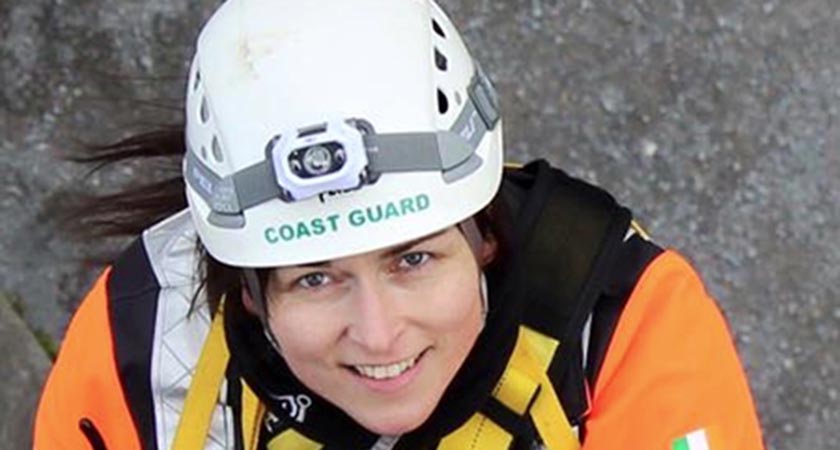 Caitríona Rós Lucas, a librarian and mother-of-two, was a volunteer in the Irish Coast Guard unit based at Doolin, Co. Clare.

In September she became the first member of the Irish Coast Guard to die on active service when her boat capsized.

The unit had been searching for a missing man off the coast of Kilkee.

Maria McCormack was born in Australia, but spent most of her childhood in Newcastle, Co. Down.

A bass player in the all-female rock band Sleek, she was also a dancer at the Windmill Theatre in Soho and a librarian in High Wycombe.

She died of pneumonia aged 61.

Bryan Maguire QC was born to working class Irish immigrants in Cambridge, where his founded a civil engineering company.

As a lawyer Maguire was instrumental in many of the changes and developments in public law in recent years, particularly in the fields of social housing and adult and children’s services. 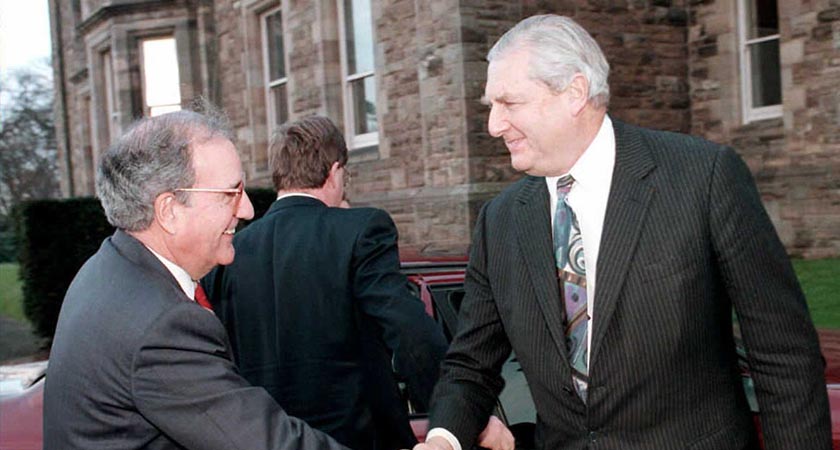 Patrick Mayhew was the longest-serving Northern Secretary. From Irish Protestant stock in Co. Cork, he became the first secretary of state to meet the Sinn Féin president Gerry Adams (in 1995).

This did not immediately bear fruit but led to further contact, eventually leading to the Good Friday Agreement.

Poet and academic John Montague was born in New York and brought up in Tyrone by his aunts.

In The Rough Field he wrote as spokesman for his people, the Ulster Catholics. In 1998 he became the first occupant of the Ireland Chair of Poetry, de facto Ireland's poet laureate.

O’Brien was a photographer who began documenting everyday, working-class life in London in the 1950s. His archive of around half a million negatives is regarded as a unique visual record of the changing nature of London over the past 60 years.

He was a friend of Ballyhaunnis-born writer Bill Naughton, and one of his black and white photographs was used on the cover of the first edition of Naughton’s Alfie in 1966.

Anne O’Keefe was a pioneer in the promotion of Irish artisan food. She played a key role in bringing the products of local cheese-makers, bakers, farmers, fishermen and other producers to a national and international market.

Bishop O’Riordan O'Riordan was ordained a priest in June 1952 for the Holy Ghost Fathers. He was appointed bishop of the Diocese of Kenema on 4 June 1984.

Louis Stewart was one of the most respected jazz guitarists in the world has been labelled one of the all-time greats in jazz.

His career began in Dublin when he played with showbands, but he soon moved to London where he played with the likes of Benny Goodman and George Shearing.

He subsequently returned to Dublin where he remained until his death. 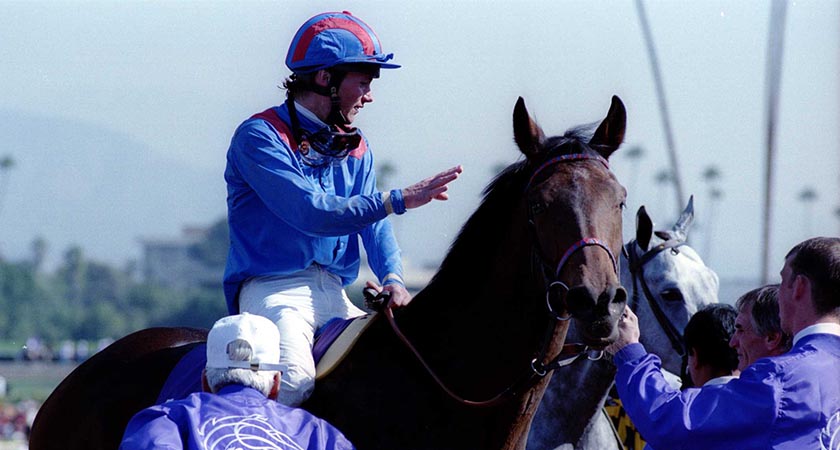 Jockey and trainer Walter Swinburn was a three times winner of the Derby whose mounts included Shergar who he rode to victory at the Derby in 1981. His first winner was on Paddy’s Luck July 12, 1978.

He was the son of Wally Swinburn who won the Irish flat racing Champion Jockey title in 1976 and 1977. 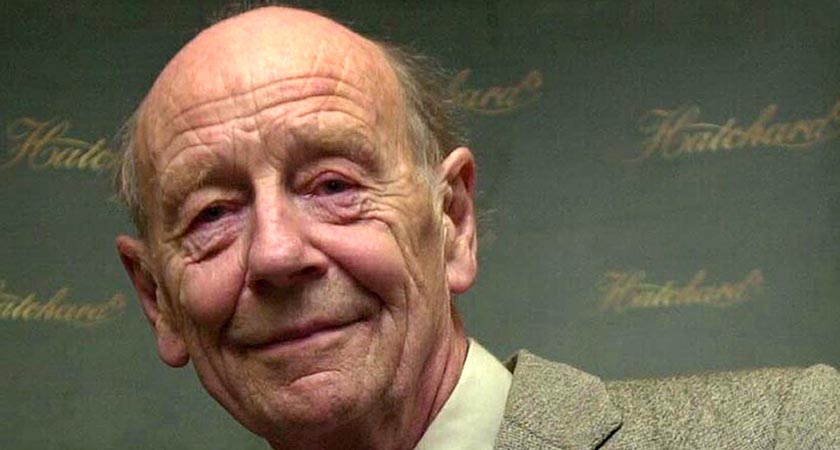 William Trevor KBE was a novelist, playwright and short story writer, and widely regarded as one of the finest contemporary English language writers, particularly in the short story genre.

He was nominated for the Booker Prize (now the Man Booker) five times, but never won it. He lived, since the 1950s, in Devon.

Born Maire Molloy, her family moved to London by 1928 as her father could find no work at home. 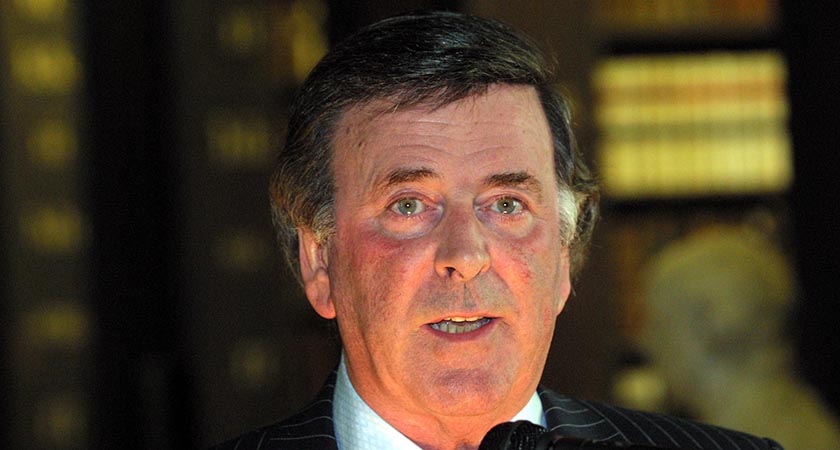 Radio broadcaster, chat show host and television presenter, at the height of his fame Terry Wogan was one of the best known faces in Britain.

Partly through his efforts, the charity Children in Need raised millions of pounds.