In Pictures... Surprise arrival of baby giraffe at Belfast Zoo

IT'S been a bumper baby year for Belfast Zoo with its latest arrival making an appearance on Monday.

Visitors got a surprise this week when they witnessed the birth of a Rothschild’s giraffe calf at the North of Ireland zoo.

The latest addition was born to mother, Neja and father, Finn and joins a raft of youngsters born to the zoo already this year, including a Western lowland gorilla, California sea lion pups, a Malayan tapir, pygmy Marmosets, red squirrel kittens, an emperor tamarin, a Southern pudu and more.

Keepers first discovered Neja’s pregnancy in 2013 and after a gestation period of approximately 15 months, she displayed signs of labour on Monday afternoon. 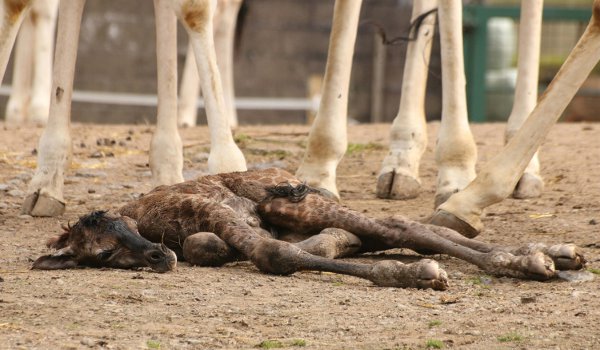 The baby giraffe soon after birth

Keepers will now look to determine the sex of the baby giraffe before giving it a name.

Zoo curator Alyn Cairns said: “Keepers were onsite throughout the labour to ensure that everything went smoothly.  Since the birth we have been giving the pair time to bond.  For that reason, we have not yet had the opportunity to find out what sex the latest arrival is.

Rothschild’s giraffe are one of the most endangered of the nine subspecies of giraffe and are part of a European breeding programme.

Belfast Zoo first became home to giraffe in 1988 and since then 33 calves have been born at the Cave Hill site.