Remembering The Seahorse: Seven facts about the forgotten Irish shipwreck

'The Wreck Of The Atlantic', 1st April 1873. The White Star Line steamer collided with Golden Rule Rock, near Mars Island off Nova Scotia, and sank with the loss of 545 lives. She was on a voyage from Liverpool and Queenstown to New York. (Photo by Hulton Archive/Getty Images)

1. ON January 30, 1816 the military transport ship, The Seahorse was wrecked off Tramore Bay on the Co. Waterford coastline while carrying the 59th Regiment of Foot soldiers

2. The wreck took the lives of 292 men as well as 71 women and children. Only 30 of the passengers on board survived

3. The ships mate John O'Sullivan, the only man on board said to have had local knowledge of the coastline, fell from the ships mast just as Ballycotton was coming into view. When he died three hours later, there was no one else on board who knew how to navigate the treacherous coastline 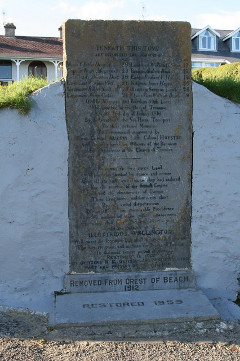 A memorial to the Seahore victims in Tramore, Co. Waterford

4. Unusually the wrecking of the ship occurred in daylight, meaning the catastrophe was visible to those on land who saw many of the victims perish but were unable to assist them

5. After the tragedy Lloyds of London funded the building of piers in the hope of preventing similar tragedy's occurring so close to shore

6. Some years after the tragedy the town of Tramore adopted the symbol of the seahorse. It can be seen today adorning school blazers and local buildings, however it is most well know as the distinctive logo of Waterford crystal, who began using it in 1955

7. The Seahorse had formerly been a fighting ship in Admiral Nelson's Navy which she joined in 1799, however she was acting as a transport ship when she sunk, returning troops home from war in Europe to Cork Harbour.

8. The ship was built in London in 1784 and constructed from Irish oak, although no images of her exist, plans show she had three decks and three masts