Revisiting the works of the great poet Patrick Kavanagh, born 115 years ago today

ON THIS day 115 years ago, the great Irish poet Patrick Kavanagh was born in County Monaghan.

In speech he may have coined such beautiful and inspiring phrases such as 'on the stem of memory imaginations blossom' and 'I dabbled in verse and it became my life', but once the man put pen to paper he tended to dwell on subjects a little more sombre.

But his often-dark subject matter didn't cost him readers-- in fact, he became one of Ireland's best loved poets.

He penned the poem Raglan Road, made famous by Dubliners' singer Luke Kelly, who transformed it into a song which was named in May of this year as Ireland's favourite folk song.

Everyone knows the song, or the tune of the song at least-- but it's the words within the poem which truly makes the track.

“On Raglan Road of an autumn day I saw her first and knew
That her dark hair would weave a snare that I might one day rue
I saw the danger, and I passed along the enchanted way
And I said, let grief be a fallen leaf at the dawning of the day”.

Kavanagh wrote a lot about love, although not much of it was happy: his other universally recognised work The Great Hunger, an extensive poem set in the backdrop of the potato blight, described the struggles of poor rural farming men too eternally tied to their land to ever find love.

"Clay is the word and clay is the flesh
Where the potato-gatherers like mechanised scarecrows move
Along the side-fall of the hill - Maguire and his men.
If we watch them an hour is there anything we can prove
Of life as it is broken-backed over the Book
Of Death? Here crows gabble over worms and frogs
And the gulls like old newspapers are blown clear of the hedges, luckily."

The Monaghan man had conflicting emotions about his hometown-- where Heaney and Yeats wrote love letters to the Irish countryside, Kavanagh held a bitterness toward it, as portrayed in his work Stony Grey Soil.

"You flung a ditch on my vision
Of beauty, love and truth.
O stony grey soil of Monaghan
You burgled my bank of youth!"

For a long time, it seems the only real love that Patrick Kavanagh held for anyone or anything was for his own mother. The poem he wrote after her death, In Memory of my Mother, is almost painful to read, the intensely private emotions laid bare for the reader.

“O you are not lying in the wet clay,
For it is a harvest evening now and we
Are piling up the rocks against the moonlight
And you smile up at us – eternally.”

But after Kavanagh experienced a brush with death himself after undergoing treatment for lung cancer, he did discover a new appreciation for life and nature-- the poem Canal Bank Walk illustrates the everyday beauty which could be found in Dublin.

"Leafy-with-love banks and the green waters of the canal
Pouring redemption for me, that I do
The will of God, wallow in the habitual, the banal,
Grow with nature again as before I grew.”

A statue in tribute to the late great Patrick Kavanagh now sits on Dublin's Grand Canal, where an image of the poet gazes eternally at the beauty which made him pen the poem in the first place. 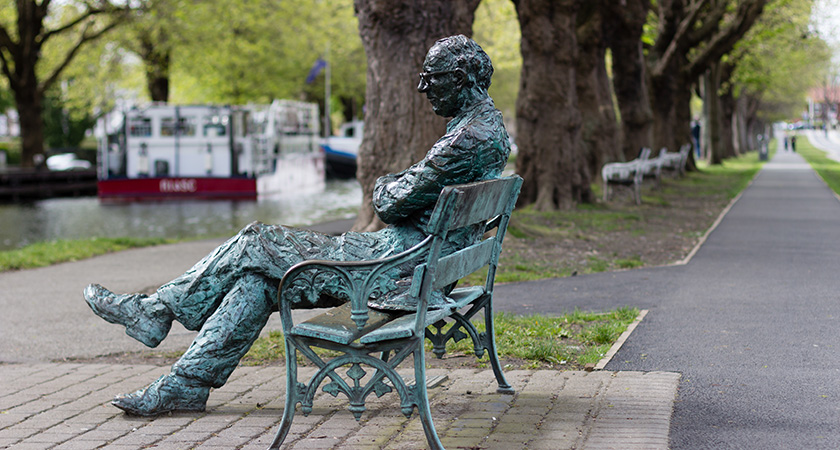 Ancient Irish cuisine: here’s what we ate before potatoes